Make Your Own Digital Clothing!

Remember in Scream 2 when the killer asks Randy what his favorite scary movie is and Randy replies, "Showgirls" ? Well let me tell you something, Randy was not kidding. Showgirls is terrifying. I've seen Showgirls about 100 times because for some reason Showgirls is played at least once a week on TV. If you know anything about cable network movies than you know that there is a very strict no boobies clause. Due to this, the TV version of Showgirls is hilarious because they draw on digital clothes to cover up the boobies. I didn't start noticing this for a few years, till one day when I noticed that the leopard spots on Nomi's belly shirt were moving. In fact I had gotten so used to this digital clothes version, that I had completely forgotten the full unedited version existed.
This all changed yesterday when I realized that the full, uncut version was available on Netflix. Oh joy I thought, some quality time with my favorite so bad it's good film! Then I put on the movie and.....it was horrifying. Apparently Showgirls is 2 hours long. Also, people are naked for 80% of this. I'm not a prude or anything but there's only so much naked Jessie Spano a soul can take. 20 minutes in and I was silently wishing that the digital clothes were with me. It's so relaxing and fun when digital clothes are there! Without them, the film turns into a completely angry, pornographic mess. There's no sense in summing up why Showgirls is an awful movie so I won't. But just know that Nomi Malone is a beast. Why does she do everything so angrily? Why do periods have to be brought up? Why is she so fucking scary? I'm serious this movie is terrifying---Randy was right.
So anyways, I ended up watching the entire movie because it was so amazingly different from what I'm used to. The edited version is a completely different movie--it baffles me. Somewhere during this 2 hour long shit storm however I came up with the best idea ever. Why not add on my own digital clothes? It was like having my very own whore paper dolls. Imagine the possibilities of deciding what Nomi will wear in every single shot? Believe me--life has never been more wonderful. 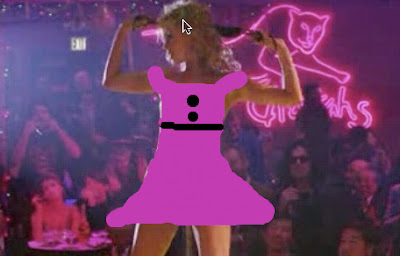 So if you're feeling artistic and bored try some Nomi Malone electronic paper dolls. Take a few pics, draw on some clothes and let the magic happen. I'm telling you--it's absurdly entertaining. 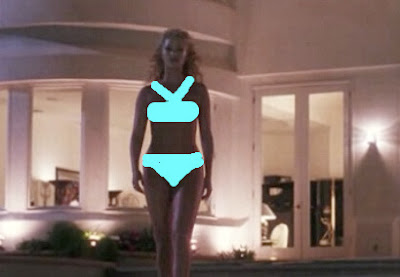 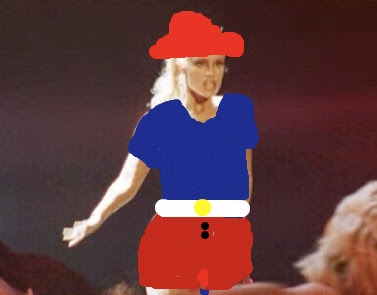 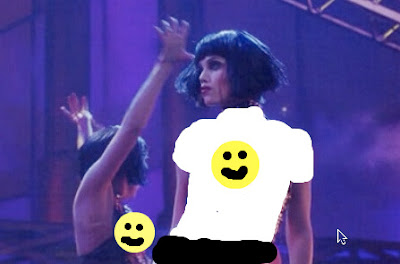 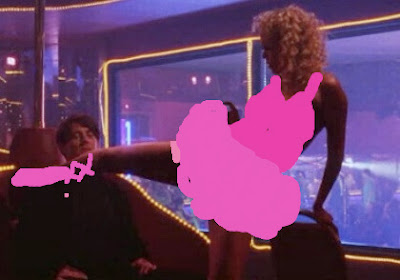 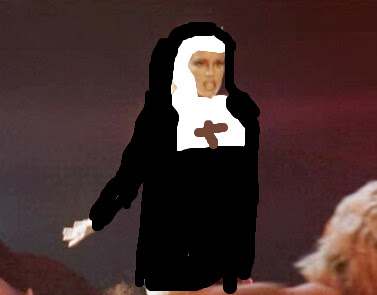 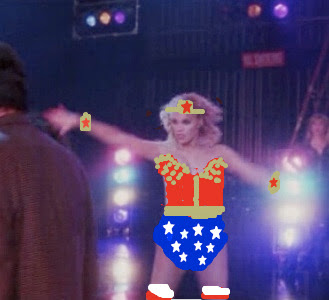 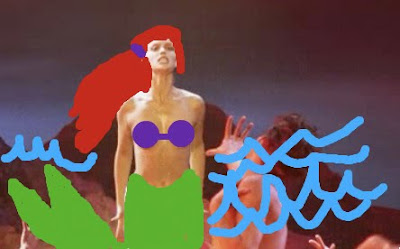 Andre, you are a genius. Showgirls is a movie near and dear to my heart and while I do own the DVD, I find myself missing the digital outfits. Thank you for this inspired rainy day activity- way more fun than paper dolls!

Poor Elizabeth Berkley. She was not able to escape from this movie. She will always be Jessie Spano to me though. I've only watched Showgirls once all the way through. I just didn't get it.

Thanks you two, and Morgan--there's nothing to get don't worry. Haha actually I was thinking about that today. What are we supposed to take away from it? Nomi does well for herself, makes it big as a showgirl and then becomes a whore again and leaves? I'm glad I stayed 2 hours to accompany her on that pointless trip to find out what we knew right away. Jeesh.

I'm going to have to respectfully disagree with you there, Andre. I learned a lot. I learned that electric palm trees make for really romantic lighting, I learned that cocaine is "great for the muscles", and most importantly I learned that the classiest way to refuse a man's sexual advances is to tell him you have my period and when he doesn't believe you tell him to "Check". Not to mention a life lesson I think we all need: "There's always someone younger and hungrier coming down the stairs after you."

Hahah I can not get over how she makes him check to see...and he looks at his fingers like....there is.....yeah. That may have been the scariest thing, I have ever seen.

And yes, the period scene freaked me out almost as much as the sex scene in the pool. I like to call that one move "the epileptic dolphin". They don't have that in the Kama Sutra!

I can't explain the awesome of this.

LMFAO! You should try out for Project Runaway. You have a great design palette.

And I find SHOWGIRLS to be absolutely hilarious for all the wrong reasons. It's a horrible movie, but it's a very entertaining one. Poor Elizabeth Berkley. She never really recovered from this one. But at least she jokes about it every time she's asked about the movie. That makes her and SHOWGIRLS cooler in my book.

Thanks Fred, Oh I wish I could be on Project Runway heheh now if only I could sew....

Showgirls is very entertaining, which is why I have seen it 100 times. It never gets old.

"It was like having my very own whore paper dolls."

I just happened upon this site a couple'a days ago through Kindertrauma, and that line is what will keep me coming back. Though, coffee out the nose isn't a wonderful feeling.

You rock, Andre! Thanks for the giggle this morning.

Haha thank you Chris! That is very kind. Glad to have gained a reader through my blossoming artistic skills and classy way to describe things..!! Welcome to the 'Gest

Hahahahaha, this is the greatest post EVER! I think my boyfriend thought I was crazy when I busted out laughing, and blurted out "whore paper dolls", but it was totally worth it. This made my day, and now I'm inspired to watch the movie (I've never seen it), and create my own fashions.

Hahah you are WARNED Emily C. There are a lot of boobs and a lot of violent sex on the behalf of Jessie Spano. It is however one of the unintentionally funniest films you will ever see though.