SCREAM: Looking Back At a Great Opening Moment 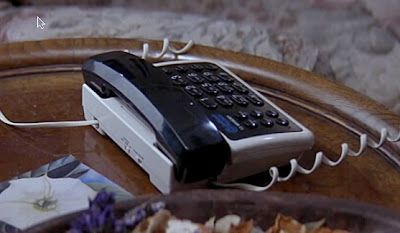 This weekend, the Coolidge Corner Theater kicks off their Nightmares on Harvard Street special program, featuring the films of Wes Craven. This Friday and Saturday at Midnight, slasher favorite Scream will begin the month long extravaganza. For more info and this month's schedule click here or visit Coolidge Corner Theater's Website.

Before I became a full fledged horror buff, Scream was one of the few horror movies I truly loved. Sure it scared the crap out of me, but I would watch it religiously, almost as much as I watched Babe the Gallant Pig (which was everyday). I can remember trying to fall asleep the night after I had watched it. The little screw on my ceiling light slowly began morphing itself into the ghostface mask, and I spent the entire night with my light on. I was positive that at any moment, the "killer" would knock down my door and kill me. There was something so real to me about Scream, and in many ways I still feel that same way. There's no supernatural killer, no mutant little boy who died and is now killing people, no boogeyman who kills people in their sleep. Scream featured a very real scenario with very real people--and that scared the hell out of me.
I've spoken before on this but I still can't ever seem to let go of how wonderful it is, that we are immediately thrown into the happenings. No 20 minute crap characterization, or setting the scene up for meeting our killer for the first time. There aren't even any opening credits--only a ringing phone, and an answered phone. 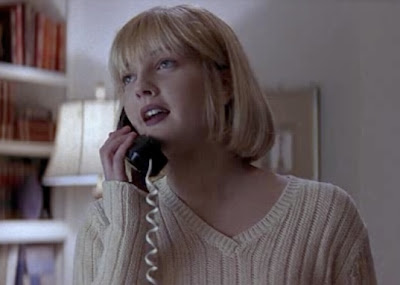 A less frequently talked about part of this opening is the 2nd time that the phone rings. After politely responding to the caller that they have the wrong number, Drew Barrymore's character Casey, hangs up the phone, turns and walks away. The phone then rings again, there is a beat, and Casey slowly turns around to stare at the phone for a brief moment--the subtlest hint of worry starting to appear on her face. 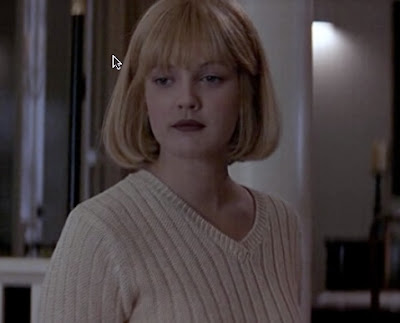 There is no scary music to tell us that we should be scared, rather we sense it in her body language and the overall tone. Even if we know the overall premise of the film that first initial call will still catch us off guard because it's so sudden. The 2nd call however and Casey's reaction causes us to be fully aware how this will all go down.
Now, as I'm sure many of you are aware, killing off a star like Drew Barrymore early in the film was to some a big surprise. Harking back to Psycho and Janet Leigh's infamous early departure, it was actually Drew, who opted for the role of Casey over Sydney. I for one cannot imagine Drew Barrymore playing Sydney (I remain unconvinced that the majority of her acting surpasses her esteemed performance in E.T.) and I still feel irksome about poster's proudly displaying Drew Barrymore front and center. We can't have it all I suppose.
What I really wanted to talk about however was the unsung hero of the opening scene and the major question on everyone's mind... 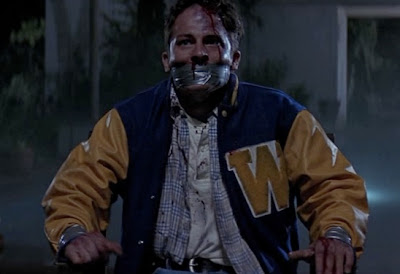 Who is Steve Orth? Can anyone even identify who the actor is? What does he look like? The poor guy auditioned for the role of Billy Loomis and was instead granted the great pleasure of being the boyfriend taped to a patio chair and being gutted. I don't even know what he looks like without a giant piece of duck tape covering his mouth. I will now take this moment to shed some life on this poor guy. His name is Kevin Patrick Walls and this is what he looks like without duck tape covering his mouth.

Is it weird I like him better with the duck tape? Anyways. Now you know who Steve Orth is.
What I always found most troubling about the opening murder is how relentlessly brutal it is. After this scene, the movies dips up and down in moments of humor and terror but this scene, and the stabbing of Casey is an entirely different ball game. Watching it back now, I start to pick up on a feeling I felt when watching The Last House on the Left for the first time---sadness. In a lot of horror movies we watch, we become accustomed to rooting for the annoying characters to kick the bucket. Here, we feel a strange sense of hopelessness and depression. Casey's parents are literally 20 feet away from her as she gets brutally stabbed. The stabbing is gutsier and more brutal than most of the horror films I have seen and yet it seldom gets mentioned. When Casey gets stabbed in the throat it's like we can feel the knife pierce our own flesh. 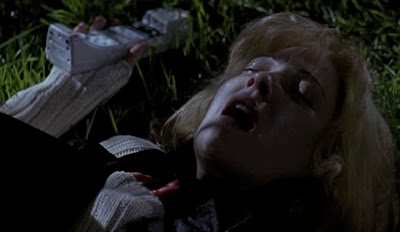 It's just so in your face and so off putting it drives me nuts with emotion. We are crushed when we see Casey's parents at the front door, and the little figure of Casey unsuccessfully crying out for help in the background. 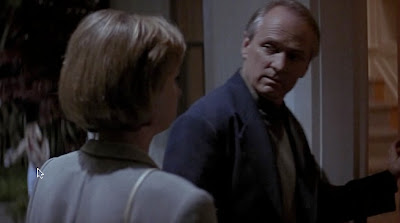 Her parent's worry and the tone in their voice kills me every time. Her mother's scream when she finds Casey's body hanging from a tree is devastating. This is I think what freaked me out the most about this film when I saw it growing up. There's a certain amount of protection you expect from your parents when you are little. In the moment where Casey's parents car is seen, and they get out from the car, there's an odd sense of relief. As you know however, the presence of her parents in no way affects her outcome. She is brutally killed steps away from her own parents. This killed me when I was little. To think that one night when home alone, this same situation could happen and that my parent's wouldn't even be able to prevent it, sent serious chills down my spine. 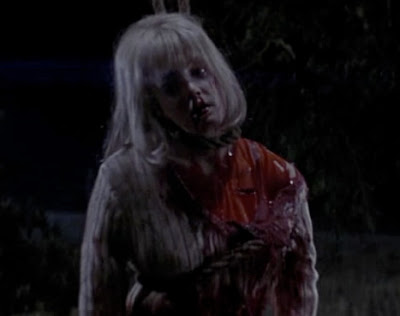 Even still watching this scene today, I have a hard time coming to terms with the way everything plays out. It remains today as one of the most surprisingly brutal depictions of murder that I've seen---and that says a lot.

Couldn't agree with you more. I think the opening scene of Scream is one of the best scenes in horror history. It scared the heck out of me when I first saw it. I watched the movie with my dad for the first time and after Casey gets killed, he turned to me and said, "Are you sure you want to finish the movie?" I'm glad I nodded yes.

The stabbing is so brutal. Every stab looks/sounds like it hurts so much, it's portrayed with realism yet a sort of sad surrealism as her parents are so close. Great scene. Great post!

I think you really hit the nail on the head with your observations on this--the opening scene is like a punch in the gut. As a viewer you are subjected to a rollercoaster of emotions in a relatively short span of time. The whole cat and mouse aspect between the killer and Casey is so tense and scary. But the way in which Casey's ordeal ends, with her seemingly just moments away from "safety", makes her death not only brutal but quite cruel as well.

It also reinforces the fact that we are never truly safe anywhere, including our own homes, which is a terrifing thought.

Its funny, I've always felt like this was the closest an American movie came to a really great gilallo set piece.

Great writeup. I used to have this opening scene memorized and would recite it when I was stuck without a book waiting in line somewhere. I'll always love Scream for coming out when I was a teenager and, for a brief period of time, inspiring more horror films to a) actually come out in the theaters and b) seem 'cool' enough to my friends that they would go see it in the theaters with me.