Monkey Shines: Not About a Toy Monkey With Cymbals. 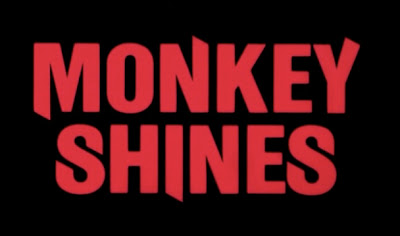 I can't believe that I spent my entire life thinking that Monkey Shines was about one of those monkey toys with cymbals, that was possessed and did things to people. Mean things. But honestly, what is one to think when they come across this 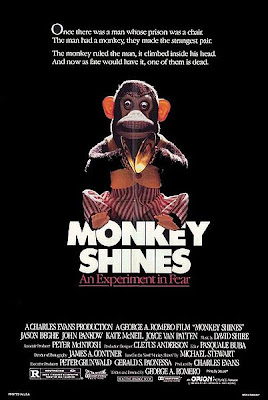 while roaming the horror section of a video store?
False advertising if you ask me. The best part is, after reading the synopsis on Netflix I still thought that maybe, just maybe there would be at least one toy monkey. SPOILER there are no toy monkeys. I also for one reason or another had no idea that George Romero wrote and directed this. Like I've said before I'm pretty oblivious to that kind of knowledge. Don't hold it against me.
After being hit by a truck (which seriously comes out of nowhere) Alan, (who likes to stretch in the buff) 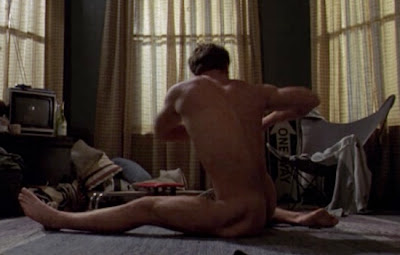 becomes a sad and lonely quadriplegic. His scientist of a friend Jeffrey, who has been injecting monkeys with human brain tissue comes to his aid when he gives Alan a lab monkey named Ella as a nurse/pet/lover. Things start getting hectic as Alan realizes that Ella is a very unusual monkey, that may be endangering the life of others as well as his.
Aside from my issues concerning why on earth they choose the cover with a toy monkey, Monkey Shines is quite an interesting and unique kind of movie. Never one to forget about both the importance and dangers of science, Romero makes yet again another thought provoking film. It raises valid arguments about testing on animals, as well as the danger of knowing more than you are capable of. Knowledge is power but sometimes, like when we dabble in things we shouldn't and turn monkeys into junkies--things get out of hand. Important lessons all around.
I find it very interesting how Monkey Shines is capable of becoming two seemingly different films at one time. For the first hour or so it could easily be considered a drama/romance movie about a man who is trying to come to terms with his recent handicap. Then it starts going in a completely new direction that is strictly horror and even includes typical horror cliches like oh I don't know--monkey's jumping out of closets and stuff. The greatest part about Monkey Shines is that if you replace Ella with just a regular woman--the movie could still make sense. Ella is in love with Alan, 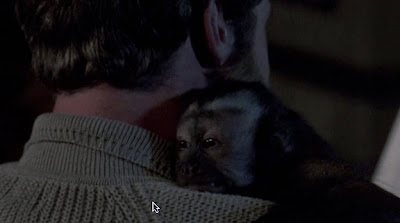 and she is jealous of Melanie and his mother. She starts off as a nice and fun loving creature who suddenly turns evil and nasty. I mean honestly Monkey Shines is really just Misery except with a monkey. She takes care of Alan, she loves Alan, then starts loving Alan too much...and shoots up in the kitchen, and pees on Alan....what? Oh sorry. Never mind.
Actually now that I've brought that up I would like to point out how I have never before seen a film that reminded me of so many different films. Let's make a list.
The Brood--Alan's anger manifests itself in the form of Ella who kills people as Alan subconsciously desires.
Re-Animator- A green tinted serum is injected which makes craaazy things happen.
Misery- same movie pretty much except with a monkey.
Alien- Spoiler! Monkey bursts out of human body, like the chest burster except out of a back. Back burster?
There are probably more but I'm too distracted by that fact that I think I just realized how AIDS happened. 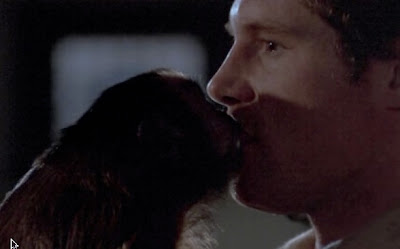 Monkey sex with a monkey who licked blood off your face? Sounds about right to me. Not that Alan had sex with the monkey but you never know.
I did have a few gripes with the film, mainly having to do with Jason Beghe who plays Alan. He really killed a large portion of the film for me. His acting is wretched. And I really hope I'm not the only one who thinks so. I could not stand it whenever Alan would get angry. Beghe does this annoying thing where it's like he's talking out of his nostrils and his face does this stupid clenched thing. It sounds so unbelievably forced and fake. Of course, Beghe was actively participating in Scientology at this time so that could be why.
I also wish that the film picked up a little sooner than it did. Things are pretty stagnant for a considerable amount of time before Ella really started losing it. Normally this wouldn't be such a big deal but I have a problem with how the action goes from 0 to 100 suddenly without warning. Before when I said that it felt like two different movies, I would attribute this problem to the conflict of delayed action. I just found it so odd how the violence is kept to a minimum in the first hour (even though it was happening) and then suddenly there are blood and jump scares all over the place.
Still though the film did a fine job of building up suspense and dread and in a way that separates it from any other movie. Having a really smart monkey as your villain will do this almost every time. I would also like to point out that having a monkey in a movie is a sure fire way to get people to like said movie. I've seen a lot of things in this world, but few things fail to bring a smile to my face like a monkey doing house chores. 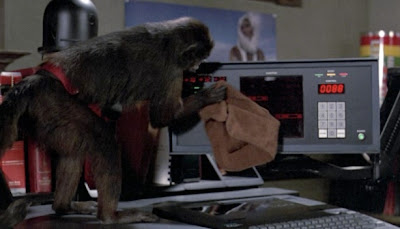 Honestly? How can you go wrong.
Although I will admit how terrified I was when I read this early disclaimer.

And boy. They were not kidding. I won't spoil the ending for anyone. But wow. I love animals but that...was....awesome. Any doubts I had about the film were 100% cleared up when that happened, and I mean it.
The final word on Monkey Shines is that I was pretty surprised, and generally pleased. I did not expect it to be such an intelligent film because you know--I thought it was about a toy.. But Georgie did it again. Check it out if you've never seen it, I guarantee you'll be pleasantly surprised in more than one way.
Hands down the most surprising element is finding out that at one point, Stanley Tucci kind of had hair and was a stud muffin. 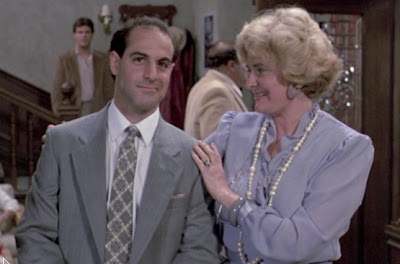 Great review! And I'm surprised that I haven't seen this one yet. I'm entirely intrigued by it now after reading this. I remember the trailer being on TV but never got around to seeing it.

Every time I see one of those cymbal monkeys, I think of Mystery Science Theater 3000's version of "Merlin's Magical Shop of Wonders," which features a demonic one. The hilarity of MST3K takes away all the pain.

Oh, and it has Ernest Borgnine.

Yeah give it a look see Dod. Whenever I see a cymbal monkey I think of the Phonics Monkey in South Park.

We discussed this on Twitter already. Just a great film due to the romance/horror mood. I haven't seen it in over a decade [I will soon though thanks to Netflix] so I can't comment on the acting. But I think it's one of Romero's most underrated films. Like George Michael once asked, "Why can't you set your monkey free?" Great review and I enjoy it when you discover films you haven't seen before.

This movie is the reason I always carry a banana with me.
Poor, sweet, cross species loving, dancing Ella...her love knew no bounds apparently. Being in love with a human ain't easy and would have gotten her kicked off the Planet of the Apes, where there are no monkeys interestingly enough.
Hats off to little Boo who played Ella! I found this about Boo on IMDb
http://www.imdb.com/name/nm1427670/
incredibly informative.
I will say this about the film, I have never seen a sex scene like this film has ever again. It has to be one of the more unique sex scenes in cinema
Great review!
Dreaded Dreams
Petunia Scareum

Agreed Petunia! That sex scene was ridiculous. I would have included it but I couldn't get a screen shot that displayed it well enough, it's definitely something you need to see for yourself.

Never seen this one, but I think I'm going to have to now.

As far as the whole monkey-mating AIDS genesis thing though, Max Mon Amour was out 2 years earlier (:

Hah well he doesn't mate with the monkey. I was just joshing. But the monkey in this licks the blood off of his face which I think is a much more direct way to start AIDS.

I actually enjoyed this movie, its not Romero's best but it also isnt his worst. I put it along side that other Romero movie that not many people have seen The Dark Half, also, not his best, but certainly not his worst.

There are some intense moments in this one, of course, all of which happen when the monkey goes berserk. I love that shot of the monkey jumping through the night sky as the lightning bolt flashes behind it!

This review was brilliant and hilarious.

What the hell was Romero thinking...