Exciting Things In No Particular Order 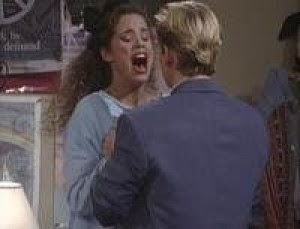 There has been way too many exciting things lately. This is odd seeing as how I typically spend my days doing nothing. Let this be a lesson to you all---do nothing....reap rewards. However exciting things aren't just happening to me mind you...exciting things are happening everywhere and it's not even springtime. I know.
Stuff about other people!
Kristy Jett To Bring the Popcorn 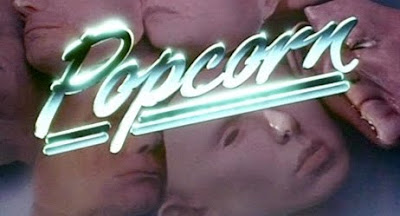 Kristy Jett is a superwoman. You can find her writing pretty much anywhere (The Bloodsprayer, Fangoria, Dread Central to name a few...) and she's also one of the hottest Fright Rags employees to grace the planet. You've probably seen her at horror conventions, making out with Jeffrey Combs, or if you were lucky enough--she was making out with YOU*. In any case, Kristy Jett frickin loves Popcorn--the movie. She loves it so much that she's using her superpowers to one day bring us a Popcorn documentary. Check out the production diary and start getting excited. This is one project you don't want to miss unfold.
**NOTE Kristy Jett only makes out with really, really, cool people and/or nerds, so don't get your hopes up.
Chuck Norris Ate a Baby and Wants to Get Married (To the Baby) 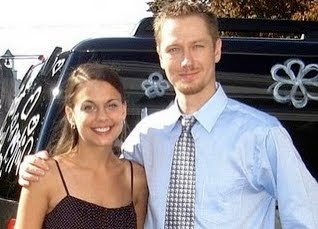 My good friend and all around awesome guy Matt, of Chuck Norris Ate My Baby is in the finals to win a $150,000 dream wedding. Before you say anything let me explain something. Out of all the people in the world--other than me and John Landis, Matt and his fiance Liz deserve to get married the most. Read the incredible story behind their love and life.... and try not to cry all over the computer please.
Liz and myself have been together for nearly ten years (!), but due to an unfortunate health issue - which led to money issues - our special day has been harder to obtain than we deserve. I had been suffering with end-stage renal failure for a good (well, bad) two years, when Liz took it upon herself to save my life by donating her kidney to me.

That was two years ago this month, and even after having such a great thing happen for us, especially for me, that illness would plague us financially for the following years since our surgery. Our finances are null as we are happy just to have each other, but to have even the most basic of wedding has proven to be difficult to afford,

Our connection is beyond that of most couples yet we still have found many road blocks keeping us from becoming man and wife, and if Liz deserved anything after her selfless act, it is to have the wedding of her dreams, which in turn would be my dream
Please help these two out and vote in this contest. You can vote once a day, and it only takes a little bit of registering to help make their dreams come true. Voting continues through November 29th so get on that! Also I will scream if one of those less deserving annoying couples win. Was I suppose to say that? Oh well I just did.
Day 30 and No Sign of John 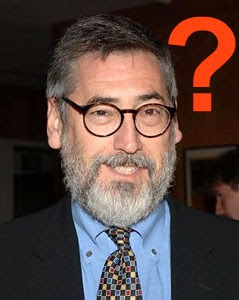 About a month ago I wrote a letter to John Landis. In this letter I asked John where he was, and if he wasn't too busy could he please make another horror movie. I have yet to receive a reply, but John if you are out there, the John Landis Project still stands strong. 1 woman strong. If you would like a John Landis Project ribbon please see me for details.
Stacie Ponder Making Another Movie

Final Girl's Stacie Ponder is at it again! This time she brings her love of the slasher genre for us to feast on. Diet! Diet! My Darling! Supermodels getting hacked to pieces? Supermodels being played by barbies? YES. Stacie is one hell of a filmmaker, especially for someone who didn't go to one of those stuck up film schools and smells funny. Do the world a favor and donate a little cash to get this movie on its feet. You won't be disappointed I guarantee it. Don't worry I'm not just saying that because I'm cyber friends with Stacie. I'm saying it cause I donated money. Uh! What? Just kidding, I'm saying it because I frickin mean it, you ass.
Stuff about ME time.
I Read a Book Again 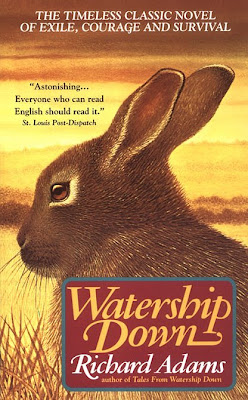 Uh huh that's right, I'm getting back on the book train. After doing some soul searching, I realized that while I read Watership Down in 7th grade--I took NOTHING away from it. This is a shame because A. I love bunnies and B. People are always like "dude Watership Down is awesome" and I have no idea what they mean.
So naturally I remedied this situation and read the book in record time. It may be too early to say this, but I'm just about positive that Watership Down is now on my all time favorite books list. I cannot tell you how excited I was to settle in and open up the book every single day. I love these bunnies to pieces, I really do. Finishing the book was comparable to finishing Are You There God It's Me Margaret. I didn't want it to end, because I wanted to see how Margaret continued to deal with her menstrual cramps. I mean... I just uhh I just got so darn close to those bunnies that I didn't want our friendship to end.
After reading the book I watched the movie, which has been cited by many as being quite traumatizing to them in their youth. I couldn't agree more, seeing bunnies rip each other to shreds is horrifying. And also--bunnies with English accents? YES. You may also have noticed I have included a little picture of a book on my sidebar. This is where you can find out what I am currently reading. Let's get smart together!
On a side note I'm a little peeved that people continue to bash Watership Down for being misogynistic. They are bunnies people. In the bunny society, male bunnies rule the roost. Richard Adams is not sexist for telling the truth. Suck it up.
I am a Cinema-Geek

A few weeks ago I was met with a most pleasant surprise. Nate Yapp--Editor in Creep of the extraordinary Classic-Horror.com was inviting me to become an author of Cinema-Geek. A spin off blog if you will, that Nate was opening up to other horror bloggers as a way to talk about non horror movies. I was thrilled. I cannot tell you the amount of times that I would watch a non horror movie and be consumed with a burning desire to talk about it. Thanks to Nate, my dreams have come true. Visit Cinema-Geek and read my ramblings on neato films like Butch Cassidy and the Sundance Kid, Who's Afraid of Virginia Woolf, and Guess Who's Coming to Dinner.
Cinema-Geek is also the home of some other horror bloggers you may be familiar with. Brian Solomon of the Vault of Horror, Pax Romano of Billy Loves Stu, Dod March of the WGON Helicopter and Ryne Barber of The Moon is a Dead World
Join us and our geekery.
Still Spraying Blood 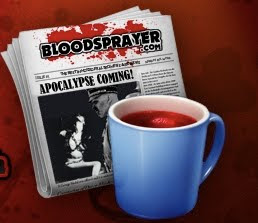 The Bloodsprayer is everything that is right in this world. I've been writing for the site for quite some time now, but due to my reluctance to pimp myself out I've been strangely avoiding bringing it up. That all changed today when I ate an apple with some peanut butter, and realized that it's okay to talk about yourself.
The Bloodsprayer is home to multitudes of fantastic writers that I can't possibly all name because my link button might die. But to name a few there is... Christine Hadden of Fascination With Fear, Brian Solomon (AGAIN!), Kristy Jett, Zach Shildwachter of Z for Zombies, and Morgan Rankin of The Kid In the Hall. Plus they've just added a ton of other awesome writers...good god my head is going to explode. It's a site filled with the sort of stuff you WANT to read. It's not just a compilation of tired old news stories, or reviews that are evident of bribery. It's good, it's honest, and it is staffed with the most talented writers in the Blogosphere.
Frickin Fangirltastic

Fangirltastic, formerly known as Pretty Scary was created by the one and only Heidi Martinuzzi. It's become a giant site of awesome that compiles the latest from Action, Fantasy Horror AND Science Fiction with a female centered focus. But sometimes we still talk about boys. That's right I said we. Heidi asked me to write for Fangirltastic not too long ago. And since then I've spewing out reviews left and right.
A little more recently, Heidi asked me to jump on board as the Assistant Editor of the website. This news tantalized my face. I readily accepted and have now been officially an "assistant editor" for a few weeks. It's already been an amazing experience and I hope to do my best to bring some more excitement to the site. Now I can spew about anything I want there. Give the site a look see, and breathe in the awesome. Don't worry I still secretly talk about my cat when Heidi isn't looking.
Well, I think that's all. Man, am I out of breath. What an exciting post. Hope you had fun, and don't worry I won't talk about myself again for at least 8 months.
Posted by Andre Dumas at 7:12 PM

Landis was working on Burke and Hare, or still is.

Go ahead, talk about yourself as much as you want!

"This news tantalized my face." Easily the quote of the week for me.

This is true Sean, although it's still just a black comedy I want HORROR damnit!!

Thanks Dod, woohoo I made the quote of the week!
: )

American Werewolf is a black comedy as well. Landis can make just about anything and it'll be gold. Burke and Hare is going to be awesome.

Well jeesh I didn't say it wouldn't be awesome!

1) I of course want to join the John Landis Project. Was just watching Animal House for the hundred and third time the other day and wondered the same thing.
Where is this dude?

2) So - I've never seen Watership Down. Bunnies ripping each other to shreds? Is it some weird Donnie Darko disease? So it's a horror movie then I guess..?

3)Thank you for the shout out. You're swell.

4) Congrats on all your success - you deserve it quite rightly :)

So glad you enjoyed Watership Down.
The animated feature is a sacred memory for me, and will be up for review in Big D's Top 5 animated films on my blog soon.
Please, please, please read and/or watch Plague Dogs another of Richard Adams works that Im sure you'll enjoy as well.
Whose your favourite bunny?
Mines Big Wig (voiced by none other than John Hurt dont you know?)Bunnys with English accents? Ahem! God is an Englishman my dear!

I just peed myself laughing through this whole blessed post...I love your writing...NOW AND FOREVER!

I love this round up of goodies. It's refreshing to find such a variety of good and entertaining news!

Yay! Everyday I make Kristy Jett laugh is a GOOD day.
And thanks Zach!