The Descent Part 2: Good To Know Eye Makeup Stays On After Some Serious Cave Dwelling. 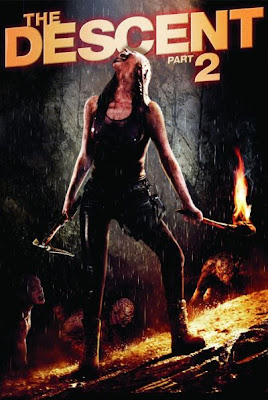 You may have noticed that I do not have a review for the Descent. I have seen it I should add, but never really wanted to write about it. This is for two contradicting reasons, 1.) the film gave me such horrible anxiety that I never wanted to re-watch it and 2.) almost everyone already knows it is the shit, what else is there to discuss? The Descent was rightfully heralded as being one of the scariest horror films in a long time. Its intense claustrophobic atmosphere fills the viewer with such a powerful sense of fear long before the cave dwellers appear. It depicts strong, independent women who do not take off their clothes and are capable of rescuing themselves without the aid of big strong men. Yes, The Descent is clearly one of the best. 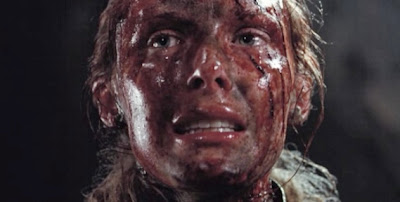 The premise behind The Descent 2 is one of those dream come true sequels. You know the ones that pick up exactly where we left off and continue the story without changing a thing. Yes, don't you love those? Sarah returned from her nightmarish jaunt down in the caves of hell and has been blessed (?) with an onset of amnesia. Two police officers on the case suspect that the rest of the women might be down there still and so they drag Sarah down with them. If we just ignore that little plot hole of no way in hell would any human being on the planet do that to an obviously traumatized individual, then we are able to embrace what happens next, if not then you probably hate this movie. While down in the cave system, Sarah's memory slowly starts coming back and she remembers exactly what killed her friends. The only problem is, she is trapped in the caves of hell again and must find a new way out.
While the Descent 2 is of course nowhere near as powerful as the first film, I still found plenty to be excited about. The most upsetting thing to me (other than the ending which I'll get to eventually) was the lack of the claustrophobic atmosphere we got to know so well from the first film. It's actually almost like a Jaws/ Jaws 2 situation where instead of holding off on the big scares with the creatures we are introduced to them almost immediately. This isn't necessarily a deal breaker but it does take away from the subtle, more realistic fears that were achieved in the first film. Nothing is ever really built up in this second installment, and the nice layering of fear on top of fear on top of--holy shit what was that?!-- is kind of gone. 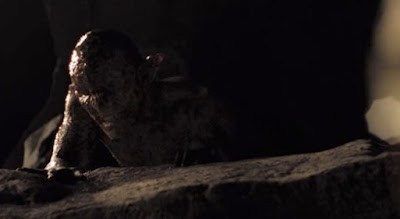 One thing I will say however is that even though The Descent 2 delivers jump scare after jump scare---they are pretty damn effective. They got me every single fucking time and I hated them for it. It was like walking through a haunted house and silently cursing about how you know something is around the corner but you have to keep walking or you'll never get out. Bastards. Bastards. Bastards.
I was also pleasantly surprised at the nice little nods to the original film, when the video camera is found (and we get to replay one of the best jump scares in the history of horror),

past characters dead with rats coming out of their mouths? YES! 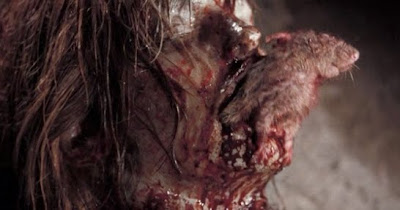 I will say however that most of the new characters introduced lack any real connection to the audience--another wonderful thing that the first film was able to do. The Descent 2 felt more like a typical horror movie ensemble with characters that were dispensable and only one or two that we really cared about.
Now if you've read anything about The Descent 2 than you know that a vital character from the 1st film returns here. If you don't want to know anything about it go ahead and skip to the end! So yes....our resident mean girl Juno returns here and it was a strange reception. I found it odd how likable she immediately becomes, kicking major ass and saving douche bag head police officer's life. I kept scratching my head because I thought for a moment that she was more or less represented as a villain in the first film. But ah yes well things change apparently. Juno developed a very nice almost barbaric attitude that I kind of dug although I was confused about why her makeup still looked pretty decent. She's probably one of those women that get their makeup tattooed on...
The last few scenes felt much more like a return to the kind of thrills we are used to, as well as some truly brutal amputating violence. Once all the annoying macho police officers and random cave experts were done with, I had a much nicer time. Part of me wishes this happened much sooner, but sometimes with sequels it takes a little time to get it right.
One thing I do want to bring up is how funny I find it that people are still arguing about how the cave dwellers came to be. I mean who's kidding who here, it's pretty obvious that they are Orcs. 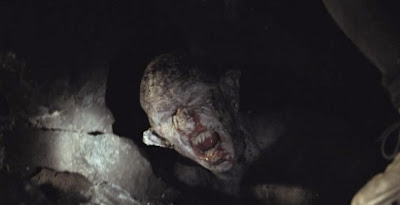 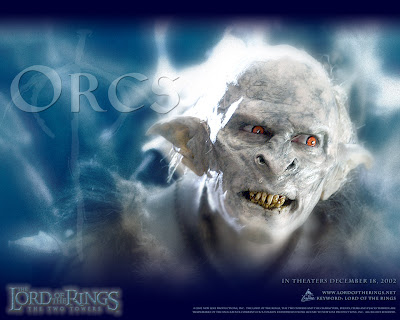 Although I GUESS the stranded human thing makes sense too, especially since that one cave dweller had long hair. Juno was starting to show some signs of cave dweller instincts so there's that big piece of evidence as well.
Now where was I...oh yes the ending. This is SPOILER territory again by the way. Now I must say that I was secretly moved by the ending sequence. Sarah's decision to sacrifice herself and stay behind with Juno's body was incredibly heartbreaking, yet fitting and understandable. Sacrificing herself so that a woman with a family still out there was nice wasn't it? Although I suppose it does suggest that if you don't reproduce or have a husband you aren't fit to live....hmmmmmmmmmmmmmm!
Well aside from that sudden depressing realization, I still liked those last few moments-- UP UNTIL the very end. Not too long ago I wrote an article on the Bloodsprayer about when final moments ruin entire films and I'd have to now group The Descent 2 in that category. It was a total Last House on the Left move, where the last 2 minutes were completely and utterly useless. I hated it with such a deep and burning passion that I even considered throwing my laptop at the wall. How dare you take our strong and moving female characters and dispatch them so easily with some shitty old man's shovel. Real nice. REAL FUCKING NICE! Bah. Everything about it was so completely opposite of what the Descent was all about. It really ruined what could have been a somewhat decent sequel.

Overall though, and if you just pretend like those last 2 minutes never happened. The Descent 2 isn't half bad. There are more than a few scares and still pays respect to its original ideas of creating terror from unconventional ways. Sure the cave dwellers steal most of the spotlight, but we get to find out what happened with our favorite cave ladies and that's all I really wanted. Well that and a clean pair of pants--but all those jump scares really ruined that dream. The Descent 2 just became available to Watch Instantly on Netflix, so give it a look see if you're in the mood to jump a mile or two. Just stop the movie 2 minutes early.
Posted by Andre Dumas at 4:26 PM

I have almost identical thoughts to you on this one. Nowhere near as terrifying or amazing as the first film, but surprisingly enjoyable for most of its run time. I think they realized they couldn't capture that new claustrophobia, so instead they went big on the gore. Hey, it worked.

...Even though the sheriff was one of the dumbest characters in cinema history. Ah well. It happens.

And yeah, the end....just didn't happen. Or it did, but will totally be reworked in part 3 (much like the ending of the FIRST film...).

I hear what you're saying but I was very disappointed with this film. Actually, I think I was just annoyed that they were even trying to make a sequel. The first one ended so perfectly (with the original ending where she's still stuck in the cave) and they're asking you to throw that out and embrace the crappier US ending. From the onset, I was annoyed and then I found that "tiny plothole" to be ridiculous and I had a hard time getting past it.

Beyond that, I didn't like the characters and I found Juno's return to be ridiculous. Then the ending is cheap and terrible. It robs this sequel of any value.

Haha I'd certainly say you didn't like it Matt, which is cool because I totally get that.

Perhaps I'm not as connected to the first Descent as most other people, so that may be why the switch of endings didn't bother me. I guess if you want to do a good sequel to this, Sarah would have needed reinforcements. If they had started it with the original ending, it would really have no place to go if you think about it.

But I agree with you definitely, it's not a great movie by any means--but I did come away at least enjoying something.

Oh actually I wanted to say something else in regards to the tiny plot hole. I was watching Alien last night, and realized that Sarah's situation is very similar to Ripley's only Sarah does not remember. A really easy solution to that would have been removing the whole Amnesia thing and the detective (the woman) convincing Sarah to go back down. It would make for a very interesting test of Sarah's character, and would justify much more about the ending.

Regarding what you said about the endings, I just loved the original one so much that it seemed unnecessary for a sequel to even be made. That said, this is horror and there will always be sequels to the things we love and I understand the need to use the alternative ending to make this sequel possible.

As for the plot hole, I completely agree with you. It would have been more believable (and in character) to remove the amnesia bit and the dickhead detective. It just came off as so improbable even for horror.

That said, it wasn't a terrible film and it had some creepy moments. I'm too sensitive about films I love haha.