Soylent Green: I Think I Love You 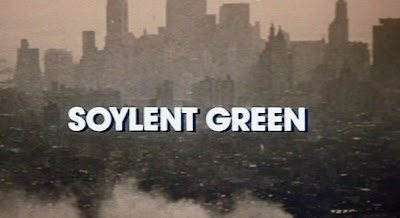 It all happened so fast. No, not Charlton Heston and that girl's relationship...I'm talking about me and Soylent Green. One minute I'm putting in the Soylent Green DVD and the next, I'm picking out places I want to go for my destination wedding. It was a whirlwind romance and certainly one that took me by surprise. I know what you're thinking--and the answer is yes, there will be a cheese buffet. 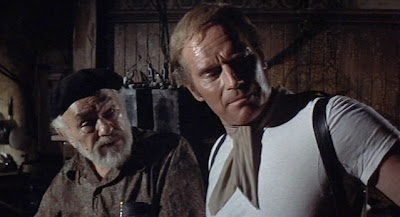 The fact of the matter is, the person that introduced me to Soylent Green deserves some recognition. Sporcle--it's you! A few weeks ago, I played the "Movie Spoilers" quiz on Sporcle. After guessing the spoiler to Soylent Green (I know, I am that good) I decided I needed to check out the movie for myself. Thank god too because all this time, I thought that Soylent Green was the guy who directed Grace (I blame his Twitter name which USED to be Paul Solet Green or SOMETHING confusing).
Soylent Green takes place in the year 2022, where the population of New York City has risen to 40 million. Homeless people clog up the streets and stairways, and food is outrageously expensive and really only for the rich people. The rest of the world survives on processed rations made by the Soylent Corporation, (Soylent Red, Soylent Yellow and the new and super "nutritious" Soylent Green, respectively). Charlton Heston plays Thorn, a detective who is investigating the murder of William Morris Simonson, one of the Soylent Corporation's board of directors. After believing that Simonson's death was really an assassination, Thorn starts uncovering some terrifying truths about the state of our world and the secret behind the Soylent Corporation.

Of all the Sci-Fi movies set in the future, Soylent Green carries quite a terrifying hypothesis. The images of the streets of New York lined with broken down cars and clogged with people--it's like a really un-fun zombie apocalypse. To think that one day, if we keep letting people like Octomom reproduce---we will all be reduced to eating colored blocks of chalk for our meals! Yikes, I'd take living in a pool of goo and being used as a battery over that any day. Just seeing that touching scene of Thorn presenting Sol with a piece of beef that he stole from Simonson's apartment, and Sol trying to tell Thorn that once--food was plentiful, is kind of heartbreaking. It makes me want to kiss the chicken thighs I just bought on sale for 3 dollars and 22 cents. But I won't because I don't want to get Salmonella. 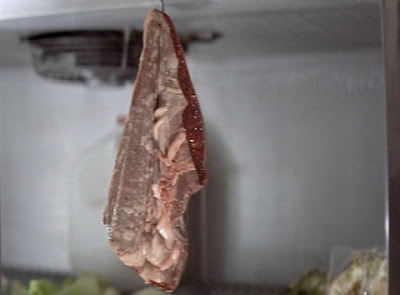 I'm still confused about how that whole sex thing happened between Thorn and that woman..but I guess in the future, men can sleep with whoever they want and when they want it. Also, the woman Shirl is referred to as a piece of "furniture", meaning that she comes with the apartment. That scene of the new tenant asking her about herself, and asking if she is "fun" was almost too creepy to handle. Who knew that even in the year 2022, women would still be wearing 70s style clothing and are still treated like shit? Oh well, at least the lucky ones get to take laughing showers with Charlton Heston! 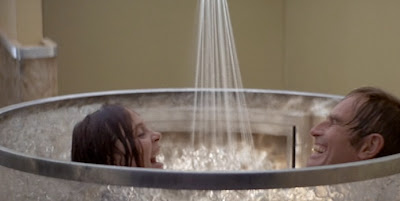 There's such a great world created within Soylent Green, that it almost seems too unbelievable. Yes, it's New York--but the environment created in this is unrecognizable as such. It so perfectly translates into the idea that sooner or later we won't even be able to recognize ourselves. Either in an advanced way, or in a terrifying way like Soylent Green--the world changes with every passing day. Soon we'll wake up and realize that hey you know what? Scooping people up using bulldozers IS really a more effective way to disperse a riot--and then we'll know that we've made it. 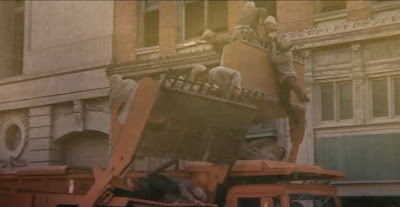 But for serious, Soylent Green is amazing. There's just so much to love about this I'm having trouble condensing it all into a coherent write up. In fact, I'm pretty sure I've already failed at doing that but who cares? Of course, it is not a horror movie--but if you think about it, it could be considered one. I can think of few more terrifying things than seeing all those bodies being stacked into garbage trucks and then spilling out at the waste disposal plant like piles and piles of trash. I mean--those are fricking bodies man, BODIES! 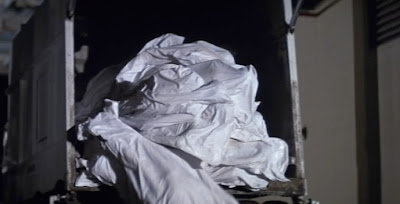 It's not trash it's us! That freaks me out. Thorn's entire discovery of the waste disposal plant was just turn after turn of yuck. Granted, I knew the big spoiler thanks to Sporcle up there--but still.....it was STILL horrifying.
Perhaps the best scene that I've witnessed in recent times however is Sol's trip home. Right away things look....creepy. People get asked their favorite color, favorite music--it's one of those moments when a little farm girl gets to pick out the new pig. You smile but then realize that picking out the new pig means she's picking out her future serving of bacon. SPOILER: Sol isn't going "home" he's going to die! Willingly!

The assisted suicide clinic was one of the most unsettling things I've ever seen. But then at the same time--it was beautiful. I mean come on, that is some wild stuff. Sol is having this beautiful moment--he's seeing visions of the grass blowing, of animals frolicking, of the ocean flowing. It really is a lovely way to die if your life has been reduced to colored blocks of chalk and one bedroom bromance apartments. The fact that Thorn too gets to see the images is almost too powerful to handle. The sweet last moments the two share together are so sad and also--it made me laugh a little (sue me). But it was so great. Yes, Soylent Green is amazing.
Clearly I do not need to further state how much I love Soylent Green. It's one of those movies where I just say YES. It's nothing complex, it's nothing outwardly pretentious--it's just a very simple idea of what exactly will happen if one day we run out of food. It's such a strangely shot film where everything looks so beautiful and well done. The breathtaking camera work is juxtaposed against the vile and dilapidated landscape of New York City and it reminds us that even though we've changed--we're still just humans after all. 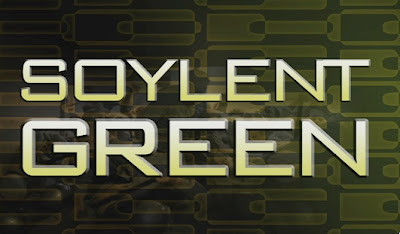 Labels: Sci-Fi, Soylent Green and I

Awesome, awesome, awesome, ma'am. You really hit on everything I love about this film. It's the rare look at the future that's just unsettling. No one ever makes sci-fi that considers what would happen if we don't advance society, but this one nails it.

Ah sorry Big D! It's funny how when you don't know the movie that someone is talking about it doesn't stick with you as much! I do enjoy Sci-Fi I really should watch it more.

Great review. Makes me want to dust off Soylent Green (the movie, not the product) and give it another watch.

What adds to the poignancy of Edward G Robinson's final scene is that he died shortly after. This was the great man's last film. Nice review - as Mr Metro said, it makes me want to watch it again.

Oh, man. I can't recall how long it's been since I saw this movie. I can't remember much of it--that's remedied from reading this excellent review, though--beyond the ending. Epic ending.

I'll have to see if my library has a copy of this tucked away.

Indeed I did read that about Edward G. Robinson Phil, it really does make it even more moving.

Rabid- Track it down immediately!

This was one of the first films I reviewed on The Film Connoisseur! I loved it too, the film to me, has elements I also saw in Logan's Run for example. That whole thing with killing the elderly, the adress the issue that after at time humans become useless and should be put to sleep? Or should they? Controversial subject manner right there!

The images and atmosphere in the film does get a bit horrifying, I mean, the freaking masses is what spooks you on this one! Their uncontrollable hunger, and the governments failure to satasfy it.

Its an issue that was recently addressed in Daybreakers, you seen it yet?

I haven't yet! I'm so dreadfully behind on catching up with the more recent releases....yeesh! I'll make sure it's on my queue.

Andre, they have similar themes. In Daybreakers the vampires are running out of food, just like humans are on this movie. And they take violent steps towards satiating their hunger, just like the crazy masses in Soylent Green.

Now, imagine if the masses in Soylent Green were all bloodthirsty vampires, dying to feed....and thats part of what youll see in Daybreakers.

Check out my review for it: