The Crow: We'll See How Much Of a Badass You Are When That Bullet Comes Back Out. 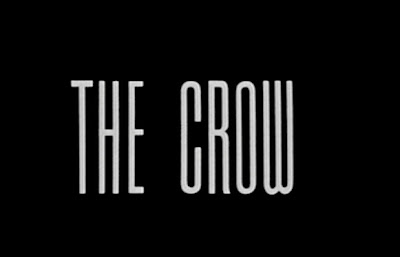 Who's ready for embarrassing story time?
The Tale of That Time I Thought Brandon Lee Was Asian.
Wait Just Kidding He is.
But He Still Looks White.
Whoops.
Once upon a time, a not so long time ago, I envisioned Brandon Lee looking really Asian. I had it in my head that since he was the son of Bruce Lee, he must look exactly like him. Well, one day, I was surfing the Internet and doing research on the tragedy behind The Crow. I saw some pictures of Brandon Lee without his crow make up and was confused. "Wait a minute", I said to myself, only out loud because sometimes I talk out loud to myself, "He doesn't look Asian". From that moment on, I devised a tricky explanation in my head that may or may not have caused me to draw the conclusion that Bruce Lee was actually Jean-Claude Van Damme. Yes, in that silly place called my head, I decided that Bruce Lee was that white guy that did Kung Fu. As it turns out tonight, I had to double check my hypothesis by Googling Bruce Lee. I mean duh he's clearly very Asian. Which of course means that Brandon Lee is also Asian. Since I'm terrible at math, I failed to realize that Brandon Lee is half Asian and half white. Still though, he looks nothing like his father. And for a minute I thought he was Buffy the Vampire Slayer's boyfriend, in the Buffy the Vampire Slayer movie.
The End
Well that was kind of racist, I admit it. But come on, you can't fault me for being confused about a few things. Also it was a Wednesday.
Alright The Crow! People get really excited about The Crow. It's like this super badass movie that everyone brings up when they want to be high fived. I figured it may include the following adjectives; awesome, cool, sweet, dark, Gothic, industrial, grimy, sad clown makeup (shit that's a noun!), ummm.... bad-assness. And you know something--it does include those things. BUT I didn't like it and I thought it was a pretty horrible movie. BUT BUT I understand it's fandom...kind of. 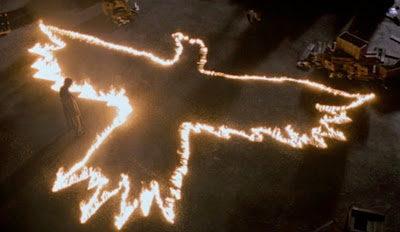 One year after some real assholes kill a rock guitarist and his fiancee, the rock guitarist, Eric rises from the grave to exact his revenge. Led by the superpowers of a mysterious crow that bridges the gap between the living and the dead, Eric must kill those assholes, and ease his pain and suffering. Or something like that.
The Crow was a comic book before being turned into a "Gothic action thriller", which is probably a big piece of why I don't like it. Look, I'm going to be upfront with you all because I like you--I don't like comic books very much. Well alright, I've never given them the chance. Comic book movies and I however--we just don't get along. Even more so---action films and I seldom get along. I know, I know I'm a terrible sort of person. It is due to both of these distastes I believe, that keeps me from fully embracing The Crow. It prevents me from grasping the concept that hey--Brandon Lee is a terrible actor, but he's suppose to be and stuff. 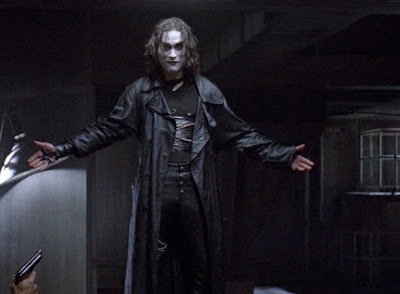 In fact, that was actually my number one complaint with the film as a whole. Loved the visual aspects, loved the darkness, and the idea of the revenge and how everything ties into love and what not. But I could not for the life of me get past Brandon Lee's performance. I know he's an action star, and I know that action stars are sort of notorious in that Chuck Norris way, of delivering lines with the highest amount of cheese possible but I'm sorry--it was horrible. It was causing me to laugh out loud and hit my head on my table. He of course isn't the only guilty one, but at least Ernie Hudson is capable of embracing the cheese and making it a part of him. I just cannot buy that such a hard, dark, strong dead crow man would say those one liners while killing all these people. On top of that--if revenging his fiance's death is so important to him and something that he takes so seriously, what is with all the joking?!
I need you to do something for me all you Crow fans. I need to just admit this is both a poorly acted and poorly written film. It can still be a fine movie, I just need to make sure we are all on the same page there. Okay? Phew. 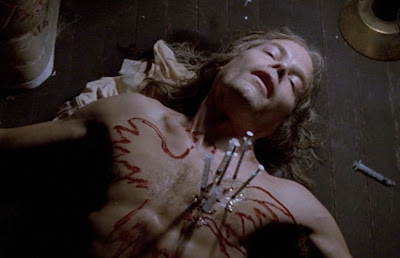 Aside from those two things, The Crow is very entertaining. It has the good fortune of keeping us alert and interested from the moment the movie begins. We are immediately presented with the story- and with the tragedy. The only thing that is hindered really gets in the way of all this is that Eric's suffering once he gets out of the grave is not very strong. He's screaming yes, but I don't feel like he's being continually tortured. I thiiiink and correct me if I'm wrong, but I think that was a similar complaint that many of the fans of the comic book had. Eric in the comic book was SO dark and SO tortured that it felt in many ways like Brandon Lee just could not pull it off well enough. 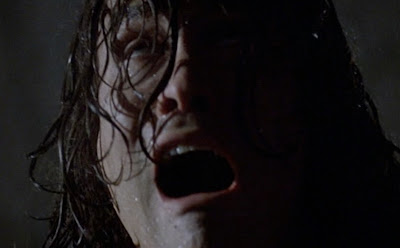 A little birdie told me that The Crow is one of the best comic book adaptions out there. I cannot disagree or agree with that of course. Whether or not it is a good adaption however is I suppose irrelevant to how I feel about it. I'm not judging the comic book, I'm judging it based on how I think it compares to every movie that I've ever seen. And that my friends is why my opinion of this film is not a very strong one.
Now from a technical standpoint this is true. But due to all the real life tragedy surrounding the film and Brandon's death I can't help but be entirely intrigued by it all. Movies like this receive an added dose of uneasiness. We feel a little funny thinking that Brandon Lee died during the filming of this. It's the same way we feel when we watch The Twilight Zone Movie, or even The Dark Knight. It's creepy. And by the way it does not help that The Joker's make up looks oddly similar to The Crow's. Just thought I'd throw that out there. Fucking. Creepy.
Overall, The Crow was a bit of a let down. I guess I didn't realize how action flicky it would be. Again, I am stupid and do not know how to correctly associate the name Brandon Lee with the kind of film it will be. It was still of course entertaining, but I probably won't be high fiving anyone over it anytime soon. I'm sorry if this means we can't hang out anymore.
The film does however receive bonus points for having Ernie Hudson, Tony Todd and Luther from The Warriors all in one film. And let's be serious, it's quite obvious that David Patrick Kelly was really burning his tongue with his cigarettes in that scene, because that's just the kind of man he is. 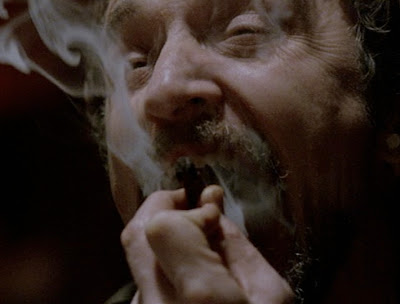 Alright now, who wants to swallow some bullets with me? Hate to see what that looks like on the way out...
Posted by Andre Dumas at 9:10 PM

This movie was rather a Very Big Deal to many of my friends and acquaintances as it came out when I was in high school. I agree Lee is quite hammy in all this (and Michael Wincott's hair unconvincing) - but I think the film was iconic in its gothic look, the violence, the revenge bit and the soundtrack. And I think some more successful films like The Matrix and Seven - not to mention Ledger's performance (which outstrips Lee's easily) in The Dark Knight - owe a little to this film.

Thanks for a great review!

Your intro to this review was fucking hilarious!
Being a comic fan, I could see how people might think it's a great adaption because it stayed true to the original source...it sucked just like the comic did!

I actually thought that the comic book of The Crow and the movie of The Crow were very different indeed - in event, in tone, in characterization, etc.

They had the same character names and the same basic idea, but the movie lacked the extreme, heartless sadism of the comic book, and it made the main characer into kind of a hero. For example, I can't imagine the Eric of the movie waiting for a pair of thugs to finish murdering an intellectually disabled kid before cutting off their feet and grinning happily while they bleed to death.

And yeah, Brandon Lee was a big cheese. I think that if he hadn't died, he would be completely forgotten now and The Crow would be barely remembered as a silly, violent rip-off of Tim Burton's Batman movies.

Getting Bruce Lee and Jean-Claude Van Damme mixed up is kind of amazing in any universe, though. It's a bit like saying, "Wasn't Dracula that guy with the hockey mask and the machete? And didn't George W. Bush discover that lightning bolts are electricity?"

Wow, that's actually a really interesting point Pearce. I think you are right. The Crow gets talked about mostly these days because of Lee's death. It's actually the sole reason I sought it out in the first place.

You didn't like The Crow? Really? Maybe because when I saw it, way back when it first came out and was a big deal b/c of Lee's death, I didn't see alot of things you pointed out. It's super-dark, which doesn't thrill me, but I'll re-watch it when it's on -- I like the mythology behind it.

I think it was a big deal too because Lee's dad died a mysterious death in the middle of a film he was making, almost like a family curse.

Let's see, your attempts at humor are tremendously outshined by your incessant need to dog AMD criticize a deceased LEGEND if you actually paid attention to the movie in full, Eric (lee's character) only really adopts the witty one-liners after he kills Tin Tin. If I could offer a little insight, it is actually VERY believable that someone who was allowed to not only come back from the dead and exact revenge on their killers, but also gifted with invincibility, I think anyone would be madly amazed AND using every oppurtinity to toy with his/her now-victims. I think you miss the whole point the movie was trying to make. Laugh now, Cry later. You just dont know good acting when you see it.