Henry: Portrait of a Serial Killer: Welcome to Sociopath Country 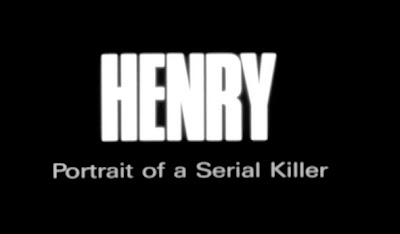 As I make my way through the last few movies I have yet to see before I can generate my very own "Most Disturbing" list, I'm starting to get the feeling that my soul has been stolen. Not in that Mortal Kombat--lost for all eternity, Emperor Shao Kahn ripping my soul out for his collection way though. Maybe more like Dementor's have slowly sucked my soul out and it hovers above me waving gleefully back kind of thing. I guess I just keep reading these accounts where people watch these disturbing films and end up feeling faint, and distraught, and I never feel that way. I can understand of course how one might feel that way, but ultimately I press the stop button and go to sleep soundly. I suppose in the grand scheme of things, I have seen so many of these films that I am in a way becoming desensitized. I'm like a garbage man who just isn't affected by the horrible stench of filth anymore because I'm so used to it. I still hold out for that one garbage bag that will be unavoidably stinky (I'm guessing that it's August Underground's Mordum or Necromantik) but until then, it's just another day of work. 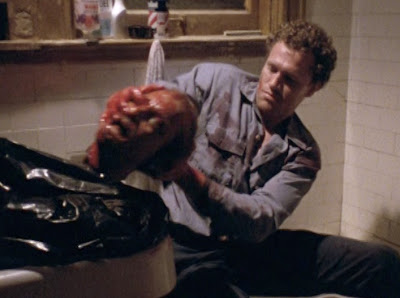 So that brings us to Henry: Portrait of a Serial Killer. A film that many before me have dubbed as being one of the most disturbing films they've seen--complete with a hand held camera murder that we get to watch more than once. While I wasn't particularly uncomfortable during this scene, and found a similar scene from A Clockwork Orange to be a tad more disturbing, I did find that there is a brutal realism to Henry that is seldom seen in film. I'm not talking Paranormal Activity real--but more like, Henry:Portrait of a Serial Killer seems less like a movie and more like I'm watching someone's actual home videos.
I don't mean just during that scene, where the presence and use of the video camera is obvious. I mean that the entirety of the film is so brutally realistic, that at no point do I become aware of anything that remotely resembles a story line, motive, character development for the sake of moving the film forward etc. Henry is not made in a conventional way that most movies are. The difference between most disturbing movies and Henry is that Henry never feels like a movie at all. Nothing happens that feels intentionally shocking and nothing happens that feels like it is being manipulated for the sake of true shock.
One of the most interesting stories I have found concerning Henry, is that after a screening, a man approached the director and exclaimed that he couldn't do that. He couldn't make such a horrible character who simply gets away in the end, and is released out into the world without the slightest hint of comeuppance. The director shrugged and simply said--we just did. That I think is one of the most telling aspects about the film. It's not a film in that sense, because it plays by no rules. It isn't a movie for the audience, it isn't a conflict of morality, it is simply as its title so aptly claims, a portrait.
Henry has no motive, Henry has no personality really--he is simply the most real, and honest depiction of a sociopath anyone has ever seen on film. When Henry kills people he just does it. He doesn't waste time pretending to be some suave, handsome man, or some oddly intelligent scholar. He isn't presented to us in a way that makes us feel like we need to glorify him. He's just a serial killer with no soul whatsoever. Everything he does is relentlessly and unapologetically without feeling. That my friends is the true definition of a sociopath, and to see it actually represented before our eyes IS what makes the film so disturbing.
Every time Henry approaches a potential victim, it's like we hold our breath. Personally I was praying that he wouldn't kill anyone, which again says something about the true nature of this film. We aren't rooting for the bad guy--or I hope no one is. We aren't praying for more depictions of gore, and violence because we are afraid of Henry. I can't think of too many other films that keep us from wanting to see the violence and gore unfold. Can you? Each shot of a dead body that we see, and every sound clip of what went down there--is just as off putting as the next. 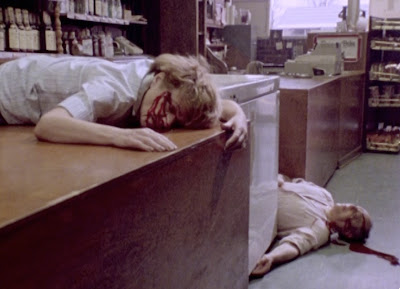 We don't exclaim about how cool something is, because the fact of the matter is that Henry is dispatching people abnormally fast and it's creepy--it really is. The man is capable of killing anyone, anytime and he never gives it much thought.
So that in fact is why I did not think this film initially "disturbed" me. It's disturbing in a much different way than we are used to, and is definitely something that didn't click with me right away. I will say that I was enormously disturbed by the incestuous rape that happens though late in the film. Again, just another depiction of cold, brutal realism that is never built up or even anticipated. It was shocking, horrific and just made you feel....yucky.
I guess what it comes down to, is just how terrifying Henry is. Even when we see him being protective of Becky, everything he does--we tend to keep our distance. That first conversation he has with Becky where he keeps changing how he killed his mom? Jesus. If that doesn't make you physically keep your distance even from your TV set as you are watching this, then you might have a problem. Poor Becky. Hopefully I'm not the only one who tried to send telepathic messages to her throughout the duration of her flirtation. 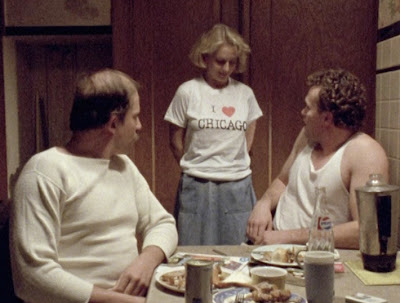 Also disturbing is reading up on the real serial killer Henry was based on, Henry Lee Lucas. Apparently "Becky" was actually the 11 year old niece of Ottis whom Henry began a relationship with with! Even though in the film Henry was often depicted as being completely angered by blatant sexual acts of any kind, the real Henry was a rapist and pedophile. Isn't that lovely?
So all in all, Henry: Portrait of a Serial Killer is quite an experience. While nothing ever makes me feel ill, or question my sanity in wanting to watch it--the film just consistently verges on too real and brutal for it to actually be a movie. It's a curious kind of film that feels completely untampered with and like something straight from some serial killer's pile of home movies. It's a grueling, realistic portrayal of what a serial killer's life would actually be like--and believe me, there's nothing glamorous about it. To be honest I get a little sick when I see people equating serial killers with something like celebrities. Something feels entirely wrong when I see someone putting up a Charles Manson poster in their bedroom. It's creepy. So you should stop doing that. Okay thanks.
Posted by Andre Dumas at 11:03 AM

I read Chas Balun's great piece on the film when I was 12 or so, and didn't see it until years later, and it made the whole thing that much more effective, instead of not delivering on such a build up like you might expect.

I remember first reading about this movie on the now defunct "Losman's Lair of Horror" website, and I saw it as soon as I could find it afterwards (this being probably in the early days of Netflix). I do like the movie, especially the fact that the serial killer isn't some smooth genius (which got tired immediately after Silence of the Lambs came out).

I'm excited to see Michael Rooker (Henry) in the upcoming episodes of the Walking Dead. He kinda makes whatever movie (or tv show) he's in.

The last movie that I saw that I'd say actually disturbed me was "Come and See," a movie about German atrocities in the USSR in WWII. It might fail to disturb on the grounds that, like Henry, you aren't supposed to "enjoy" what you are looking at.

Henry caused quite the stir when it came out back in the day, and it still certainly holds up as one of the most disturbingly intimate looks into the life of a serial killer.

It's not even very violent, well, very bloody, but when it did come out and received an X rating, it wasn't for the violence, it was for the film's tone.

Henry is and was the murderer standing next to you at the DMV, the dude picking up some groceries at Stop & Shop, the dude eating a soft serve ice cream cone at the local soft serve. Okay, maybe not that last part, but it's not like serial killers aren't able to enjoy a delicious treat just 'cause they're serial killers. Let's be fair, here.

It's interesting to read a fresh perspective, especially when the perspective still has the same conclusion about Henry that people did back in the 90s. That says a lot about its impact.

Totally agree with you about how some people tend to glorify serial killers as if they were celebrities. Its sick. Maybe films like these will help people like that realize just how stupid it is to have a poster of a serial killer in their bedroom, as if the killer was someone to admire.

As Henry Portrait of a Serial Killer shows us, serial killers are truly disturbed people. And this movie is shocking yeah, but I think its scarier to know that the real Henry was an even worse individual!

I just posted a review on My Son, My Son what have Ye Done, a couple of days ago, its a Werner Herzog film that is also about a killer, but on this occasion the killer decided to kill his own mother. With a sword. Movie is based on real life guy as well. And was produced by David Lynch. Check out my review for it if you are interested.