Other Animals That Should Run Amok

One of many horror fan's favorite genres is the classic "Animals Run Amok" variety. Here we see animals, big or small, often large in quantity and unsuspecting in damage--take over an entire town. We've seen the typical shark, spiders, alligators, giant octopus, monkeys, birds--pretty much every animal that could be potentially dangerous. We have also however seen some animals that are not very dangerous get the animals run amok treatment like frogs and slugs. It is these perhaps unsuspecting, yet ultimately surprisingly dangerous beasts that make for the greatest entertainment. And so I propose a most excellent idea. Instead of more movies about zombies and vampires--let's bring the less threatening animals run amok back into the mix.
Because I know so many screenwriters and big studio heads read blogs, and by default, my blog....here are some ideas to get you all started. 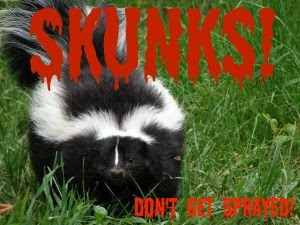 I am one of the normal people in this world that does not enjoy the sweet, tantalizing smell of a passing by skunk. To all those weirdos I ask you--have you ever really smelt a skunk's spray up close and personal? It's decidedly the worst smell in the world. There's honestly nothing like it. I can't even explain it but alright I'll try...it's like....burnt eraser mixed with rotting....butt? Yes, I think that's it.
A long time ago both of my family's dogs got sprayed by a skunk. One straight in the mouth. Thanks to them, my entire house smelled like that putrid smell of skunk butt. My clothes and everything I took to school with me reeked. So naturally this would make an excellent film. Think of the smell of a skunk being deadly--the second the stench hits you, you immediately pass out, only to be awakened moments after, mutated into a smelly, rotting, skunk butt person. NOT a zombie mind you. Just someone who smells really bad, and may or may not eat people. It's not a zombie I swear. You're still alive....and the only way to cure it is by dousing the world with tomato juice (Which by the way does not work, but for the purposes of this movie...it has to). Also the skunks are all rabid and bite people which also gives people rabies. I cannot believe no one has thought of this yet. 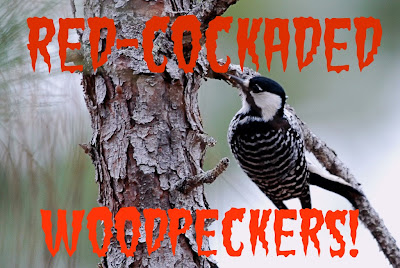 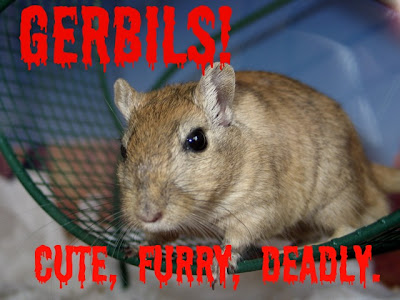 Harmless household pets huh? Think again! After a mad scientist goes back in time to insert evil fancy scientific chips into the first species of gerbils, he programs the chips to detonate in the year 2012. That's right, the world was foreseen according to the Mayan calendar as being destroyed by...gerbils! As soon as 2012 rolls around, every house with a gerbil gets a nasty surprise. The gerbils mutate into vicious creatures with only one thing on their minds, the taste of human flesh. Will our world ever be the same with man-eating gerbils on the loose? Probably not. But we may as well try to save it anyway. 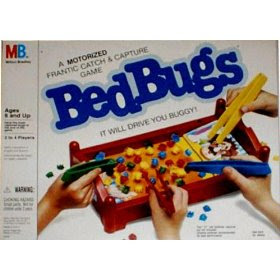 I'm sure this one is in the process of being made but I'll mention it anyways. After the outbreak in New York, bed bugs have been getting quite a lot of press. The thought of them makes my skin crawl immediately, and forces me to go check my bed just in case. So what happens when this outbreak goes global? Imagine, sleeping soundly only to awaken to your entire body being riddled with these disgusting creatures? In the bed bugs movie however, the bed bugs can tear through human flesh. So lets re imagine that........imagine you are sleeping soundly only to awaken to a funny feeling down by your foot. You go to scratch your foot and find something mushy. You try to pull yourself up but your left hand doesn't seem to be working. Confused and suddenly in pain you turn on the light, to find that your legs and hand have been chewed off and your bed is swarming with bed bugs!!!!!!!
Wow that was almost too terrifying to even type. I take it back no one make this movie, I'll never sleep again.
Posted by Andre Dumas at 4:01 PM

I believe there is a gerbil horror movie out there already. It's sort of in the vain as NIGHT OF THE LEPUS.

Oh nuts, I did a quick search for gerbil horror movies too. Oooh well.

My dog got sprayed in the mouth twice 2 summers ago! The "tomato juice solution" is utter bullshit! As for Gerbils, just ask Richard Gere

How about a blue whales run amok movie? Suddenly, after a super-quick evolutionary jump blue whales are not longer constrained to the ocean, and can now not only swim, but also walk on land, and FLY!! Bam- they decide to wipe out the human race, and suddenly they are dive-bombing towns and swallowing hundreds of people whole.

The bed bug scenario just grossed me out! No one should ever, ever make that movie. I have a hard enough time watching spiders and other creepy crawlies on screen.