A Random Willy (NOT a Penis)

The other day I was watching a movie. Surprising I know. As it so happens this movie was an MGM film, and I was met as I typically am, by the presence of Leo the roaring lion. As embarrassing as it is, I'll be honest and say that Leo's roar has always given me goosebumps. It's such a loud menacing roar, and it just crescendos without warning. It resonates in your ear and seems to course through your SOUL. After realizing this simple fact, that I was 24 years old and still a bit weary to put the volume on so loud before an MGM film--I realized that one of my unexplored willies is loud noises.

Now, I think a large part of why Leo's roar gets to me, is that it's the same roar used in Poltergeist when the Beast roars. 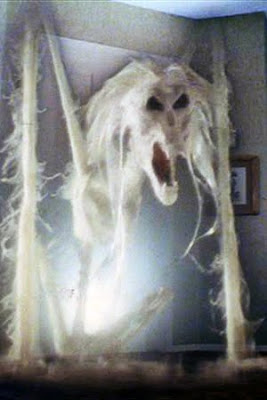 That might be it anyways, or maybe I'm just connecting it to a horror film to give myself a little more credit who knows. The fact cannot be ignored however. The sudden presence of an ear splitting noise will send me in a brief paralysis.

This is a natural reaction I think, but then again, do people usually cry after being scared by such a loud noise? NOTE: I do NOT cry every time I hear Leo's roar, but I did used to cry when I was little and when I would hear a loud noise. Growing up we had a dog named Nikki. She was a sweet black Labrador retriever, with extremely sensitive hearing. Thunder storms would cause her to panic, and back into a corner while whimpering. My other dog Sunny, would be fine. I often think I'm like Nikki in that respect. Yes, all dogs have good hearing but Nikki's was especially sensitive. Just like we are all a bit startled by an unexpected loud noise, but I may be the only one who cries.

Take this example. When I was in 2nd grade, my family and I headed to Disney World. While sitting through Honey I Shrunk the Audience, a 3-D experience complete with fantastic effects, I was doing good. I smiled gleefully at that fact that my older sister was in dismay over the fact that millions of little mice had "escaped" into the audience. I wasn't the wuss anymore, crying because the Haunted Mansion was too scary or because the Alien part of the Great Movie Ride was too horrifying to withstand (In my defense it IS). So there I was relishing in my bravery when Quark, the Szalinski's family dog's giant nose came sniffing the audience. 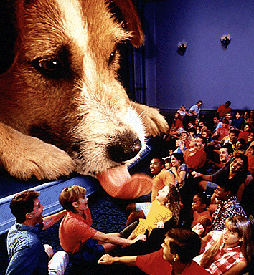 Suddenly without warning he let loose a gigantic and earth shattering sneeze, spraying us with water. Yes, my great bravery was shot down with a sneeze. I yelled out for my Mom and hid my face in her arm, crying.

Things haven't gotten entirely better. When a really loud motorcycle passes my window, my hair stands on end and I resist the urge to yell. Thunder storms still make me nervous, and I have a mini heart attack when my pipes decide to bang loudly in the middle of the night. As one may expect, this makes watching horror movies somewhat difficult. Those evil, conniving jump scares, always turning the volume up to the max. As it so happens, I rarely see jump scare centric horror films in the movie theater. I prefer the simple idea of turning the volume down on my laptop until the jump scare has passed. So laugh all you want. My name is Andre Dumas and I am afraid of loud noises.
Posted by Andre Dumas at 11:13 AM