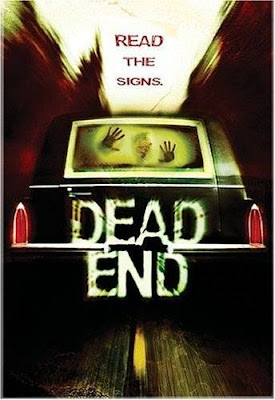 I forget where I first heard about Dead End...but I remember reading about it and saying YES that looks good. Maybe it was the cover art that sold me, or perhaps I just love how many horror movies have the title Dead End in it... regardless--I wanted to see this. And see it I did.
A family is off to celebrate the holidays, but when the father decides to take a short cut off the interstate things start to get spooky. After picking up a strange woman in white holding a baby, the family soon finds that they are trapped in a ghostly, creepy stretch of road that just doesn't seem to have an end to it. 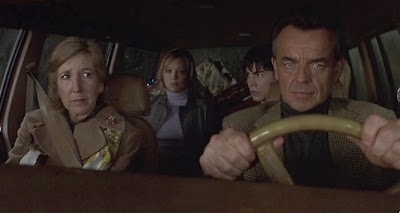 Dead End is one of those highly aggravating movies like Triangle where you too must endure the plight of being trapped in a nightmare. We never get to see what's happening "out there" outside of where are characters are, and it fills us with a very uneasy sort of vibe. Unlike Triangle though, Dead End's ultimate end--is somewhat predictable. At least I could see it coming a mile away, and so should anyone who is used to these types of movies. Dead End however accomplishes a lot on its apparently small budget. There isn't a lot shown in terms of graphic gore and the like and I must say, I found it oddly refreshing. Here is a great example of a film that uses its budget to its advantage.
The film is filled with a lot of understated creepiness that really does wonders. 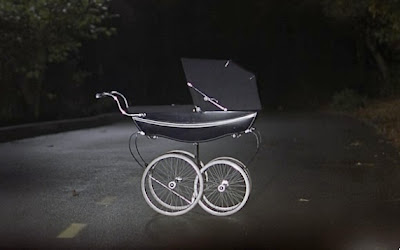 The lone baby carriage in the road for instance, the whispers caught on the air, the consistent arrival of the black hearse--the elements of scare were quite well done. And none of them I should add, required any kind of smoke and lights magic. It literally was just a baby carriage, but its random appearance makes it creepy. And also--I find that I'm oddly creeped out by those old fashioned baby carriages. Dolls, Ghostbusters II, man I hate those bastard carriages.
Dead End also has a highly comedic air to it however. It was at times a bit annoying--although only when it was the son doing the jokes, but for the most part I found the comedic aspect to be quite unusual. There was a very good timing about it that made it seem absurd, yet strangely fitting. The important thing of course though is that the movie retains its creep factor while still being quite funny. It's the sort of balance that I greatly appreciate as I find so many schlocky comedic horrors to be fully centered on the dumb humor as opposed to the scares. 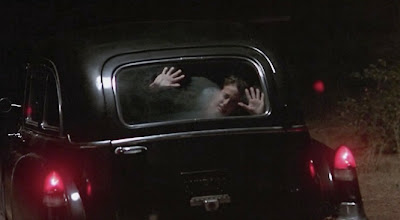 The ending seems to have a lot of people torn. I think it opens the door for a lot of questions. Clearly there isn't just one way to interpret the film and yet people think they have it all down. I've got news for you though--no matter what you think, none of the pieces will all fit together. Some find this to be a major problem with the film as a whole, but I kind of like it. I like trying to put the pieces together and not finding them all isn't necessarily a deal breaker for me. The subject matter in fact is something that is not really explored--meaning it's kind of impossible to explore as far as real life goes. In my opinion, the clouded ending fits in nicely in the overall scheme of things. Sure I may have seen most of it coming, but I didn't necessarily see everything and that to me was nice.
Give Dead End a shot. It's a nice creepy little movie that has some classic comedic moments and some truly unsettling moments. It freaked me out a few times and that's good enough for me. It's impressive for what it accomplishes without showing very much although I am still questioning the urgency for masturbating in the woods--but whatevs.
Posted by Andre Dumas at 8:35 PM

I LOVED this movie. Rented it on a whim, wanted some new xmas horror and found it both scary and absolutely hysterical. The cast has a great family chemistry that really pushes through. It's nothing new, but something about Dead End just works in such an interesting and watchable way.

never heard of this one. intersting. i'll check it out, if only for the creepy imagery. love that! thanks for posting this one.
http://bloodbathmovies.blogspot.com/

I enjoyed this one quite a bit. Yeah it was predictable, but I had a good laugh, some parts were creepy, and the cast was fun (I always like Ray Wise and Lin Shaye, they're both shameless hams).

My favourite part was the son retrieving the cellphone. No gore required, just some juicy sound effects.