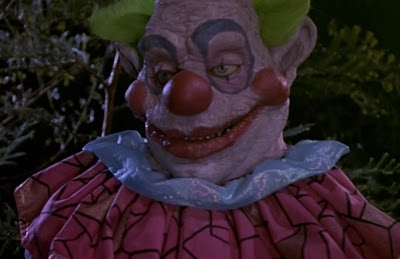 I like to think of Killer Klowns from Outer Space, as one of those films that defined my early persona. I distinctly remember watching this on TV when I was around 5 or 6 and having the Jesus juice scared out of me. It's possible that this film began an entire cycle of being terrified of practically everything. Clowns will do that. If I were to go back and write this post when I was 5 (just pretend that I knew how to write and use the internet back then) then I would highlight almost every single scene. I had no idea that Killer Klowns was meant to be anything else but a really scary horror movie. It wasn't until I was considerably older and finally found a copy of it on DVD, that I realized it was largely a comedy.
Due to this, the majority of the film is laughable. From Mike's horribly delivered lines that seem to oddly scream a Jerry Seinfeld, Billy Crystal hybrid, to the wonderfully delivered swears by John Vernon, Killer Klowns from Outer Space is best enjoyed with friends for a lot of laughs. Since Killer Klowns is one of the only horror movies that I actually own, I like to break it out now and again to relive some of the earliest memories I have. Through all of these viewings, I can't help but notice that while the film is quite hilarious in its so bad it's good glory, two moments stand very far apart from the rest of the film.
These two moments seem to have a completely different tone about them, and on their own could exist as a snippet from a superbly creepy and nightmarish type of film. In these scenes there is no kooky soundtrack letting us know that it's okay to laugh, and there is virtually nothing that even hints at being funny. These moments always surprise me and yet I feel like they are often forgot about and lost amongst the comedic white noise.
The first is that scene at Big Top Burger, where kids and parents are dining on their late night fast food meals. We are shown a little girl who turns her head to the side and smiles. 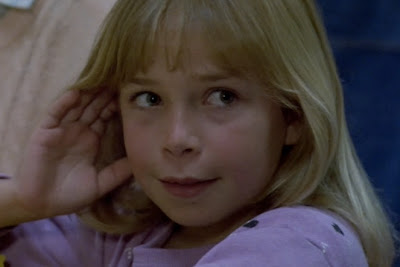 We see that one of the Klowns is standing outside and waving right back at her. 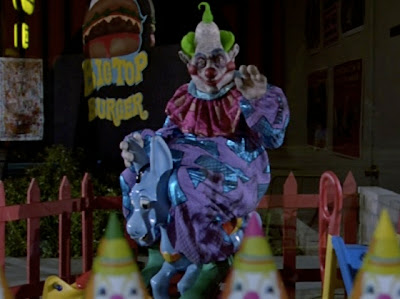 Things then go from creepy to creeptastic, as the Klown plays a hide and seek game and then beckons the little girl outside with a smile on his face. 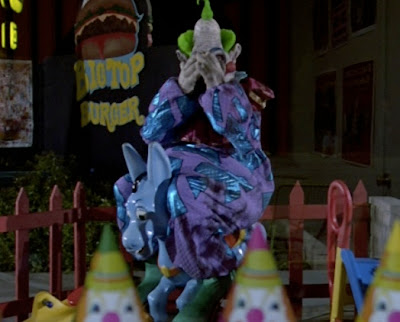 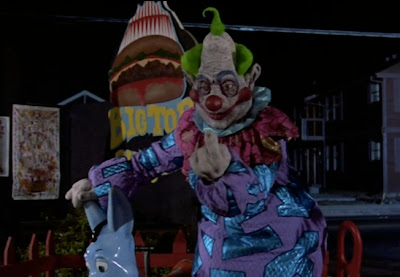 The camera then pans to what the Klown is hiding behind his back and we see a giant carnival mallet. 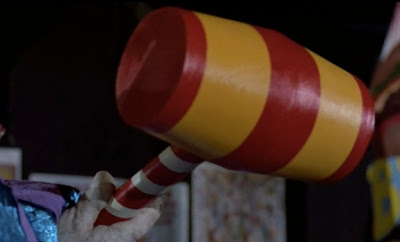 The little girl continues to come, getting closer and closer and even going so far as to open the door and ending up inches away from the Klown. Just when we think are about to cross a few taboos, she is pulled back inside by her mother and scolded for not finishing her dinner. 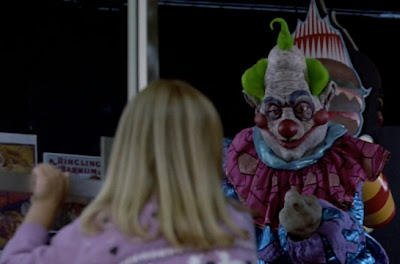 What always got me about this scene was how quiet it is. The background noise of the inside of the restaurant is removed while a simple Candyman like score replaces it. The silent interaction between the little girl and the Klown is eerie and even verges on uncomfortable. There is one shot of the little girl's empty chair which at once causes us both distress and dread. 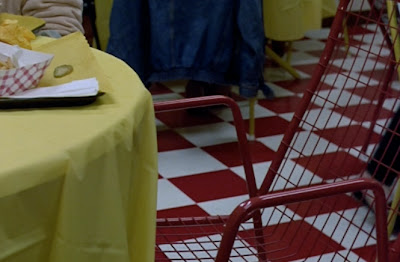 It's almost like we're watching some terrible Lifetime movie about child abduction. We don't expect to see any kids killed by the hands of the Klowns and yet we are presented with this situation that has such a potential to be genuinely terrifying. It's almost like the scene is whispered because it's so startling and unexpected. Another reason this scene sticks out to me, is the method that the Klown was going to use to kill her. When that camera pans around to his back we expect to see a cotton candy gun, or even the popcorn blaster---we do not expect to see a weapon that suggests such brutality. Granted we don't know what that hammer/mallet could have done, it could have just done something silly and Klownish but then again...it's a hammer. Thinking about the direction that this scene could have gone still at times gives me chills.
The second scene is the Mooney ventriloquist act. As Dave is exiting the police station he finds a Klown sitting at Mooney's desk. 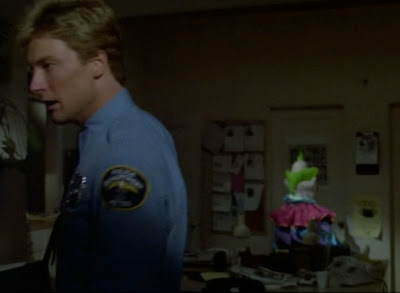 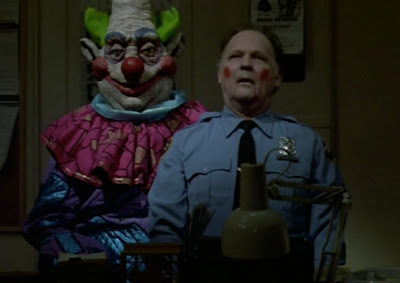 The Mooney puppet says a strange line about some girl and we catch the slightest hint of a Klown voice being disguised. Then the camera zooms in on Mooney as he says, "Don't worry Dave, all we want to do is kill you." 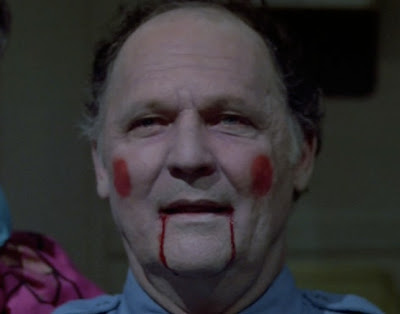 The Klown then yanks his hand out from the inside of Mooney's head, and seems to shake the blood off of his soaked hand. 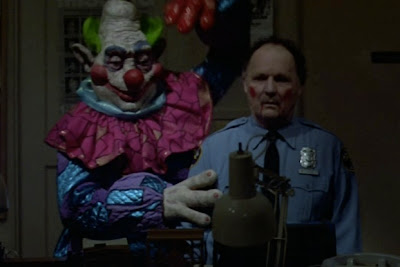 What gets me about this is how eerie the whole thing really is. I never used to notice that you can just barely hear the Klown language underneath Mooney's voice and for some reason that really scares me. I think it has to do with the fact that we aren't used to knowing what is going on inside the Klown's heads. We may have a notion that they do want to kill us, but so far we have just laughed at their desire to turn people into cotton candy and put them inside balloons. Their threat seems somehow very comical.
Looking back at this scene however, the Klown is really in charge of what Mooney is saying so he is in a sense speaking through Mooney. The real threat of the Klowns for this reason never seems to set in till this very moment. I also continue to get extremely creeped out by those first few words Mooney says. They sound like incoherent babble or what someone suffering a strong case of Schizophrenia would utter during a conversation. You try to replay the words in your head but something is not adding up. This creates such a strong feeling of unease and is a giant sign that something is very wrong with Mooney.
This scene is also uncharacteristically gory when putting it up against the rest of the film. While the Klown's hand is never actually shown inside his head there is still the implication that somehow his Klown hand is shoved up Mooney's brain and hitting all the right nerves that make moving his mouth possible. The completely blood soaked hand is also very unusual for this film. This scene in particular will always scare me for these reasons, and I don't think it gets enough credit when talking about the film as a whole.
While there may be other scenes that some would classify as following this same unusual trend and having what appears to be a tonal shift, these two are the ones that I think stand out the most and the ones that legitimately freak me out still to this day. They feel to me like little traces of brilliance in a film that gets commonly grouped with rubbish.
Posted by Andre Dumas at 7:58 PM

Good stuff, Andre. I too love this one, and agree it's better than it's given cred for being. And that Big Top Burger scene nearly made my willy list back in the day.

Also, your "scared the Jesus juice out of me" had me chuckling loudly. Good work.

The Big Top scene is genuinely creepy, especially if you consider there being any sort of weird sexual undertones there (I don't, but I've heard others comment on it as a John Wayne Gacey sort of thing). I heart everything about this movie and somehow was never really scared--even though I"m an admitted coulrophobe--though I do continue to have random nightmares occasionally visited by some Klowns.

I absolutely love this film. Just a fun B-movie that does everything right. I was always creeped out by that clown in the toilet. Don't need to see that if I really have to do my business. I own this one on DVD and I actually watched this in 1988 inside of a movie theater with DIE HARD. How cool is that double feature?

Great post. I'm so glad more people are talking about this film now. Maybe the Chiodo Brothers will finally make that sequel.

Haven't seen this for a while but I agree there's definitely a creepiness about it. I just love the costumes. I miss films that had proper creature effects like this one.

I'm embarrassed (?) to say I've never seen this the whole way through, always thinking it just seemed to stupid to be taken seriously. Well, hmpf! After reading this, I think I shall have to have a sit down with the klowns. (And it will be a brave undertaking, as I'm still shaking off the fear from both Poltergeist's clown and that big, life-sized one from Amusement!)

When I read "two scenes that really scared me," I knew immediately which scenes you meant, b/c these scenes creeped me the fuck out too! You're dead on here, the quiet eeriness of these scenes is different in tone from the rest of the movie, and kind of pulls the rug out from under you. Even rewatching it a year or so back I found myself genuinely worried for the little girl, and dreading what might happen. In a genre where you're usually tapping your foot waiting for the killing to start, I think this shows a movie that's doing something right--you *don't* want to see the killing here, you're genuinely dreading it: in a word, it's SCARY.

So few comedy/horrors manage to get EITHER the comedy or the horror bits right, let alone both. I put KKfOS on that short list.

Also kind of weird--the pulling away of a swath of cotton candy to find a bloody corpse-face underneath. When you're 8 years old, that's no joke, man! :)

Great stuff as usual, Andre! While I first saw this film back in 6th grade and it didn't really effect me as much as seeing it as a 5 or 6 year old would, those are some definitely creepy moments. The one that sticks out for me though is the shadow puppet T-Rex sequence. While hilarious, it just hit all the right places, with the people being lulled into a fate that's pretty bizarre (shrunken down and placed into a bag of popcorn? Too weird!) by an innocent act.

But then, I've always been effected by movie scenes where people's bodies are either transformed, or have something so creepy (like that) happen to 'em. It's like, you're dead, but your body will never be found because there's no body to be discovered! I mean, how many folks picture that they'll die in such a weird way? That's why that scene will always freak me out.