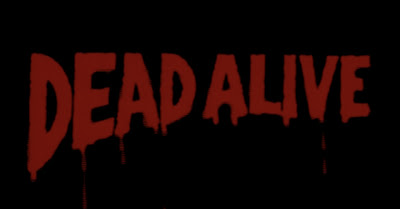 Dead Alive is another film that I had been purposely avoiding for many of the same reasons as Evil Dead II. In fact, my seeing it was due to a mistake on my part for not checking my Netflix queue. Since my top 7 movies or so were all "Long waits" the next on the list was in fact Dead Alive. Now, it's not that I don't appreciate entertaining, goofy gory films-- but Dead Alive just always seemed like a movie I never wanted to see, at the risk of being grossed out for the duration of the day. Granted I have sat through a few of the most disturbing films known to man, but even those films aren't disgusting the entire time. Dead Alive in my opinion goes above and beyond any film that claims it is "extremely violent and gory" and even films like Saw cannot compete with the sheer level of disgust and oozing splendor of guts and that sticky goo stuff as found in Dead Alive. I would actually LOVE to see some of the younger Saw fans watch Dead Alive and see what happens...hmmm that would be an amazing experiment. Quick somebody do it.
Initially my knowledge of Dead Alive was misinformed due to its box cover. 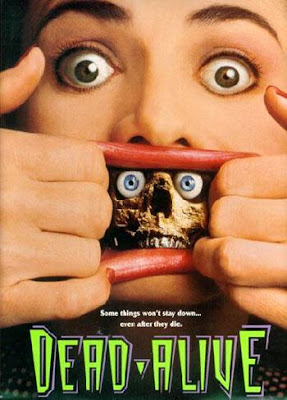 Much like Monkey Shines, I had lived a great portion of my life creating in my head what I thought the movie was about due to this cover. What I thought was of course very wrong. All these years I thought Dead Alive was about a weird skeleton monster that lived inside of people's mouths! The 90s had a few kinks in the marketing ploys I think.
In any case, Dead Alive is not about a skeleton monster that lives inside people's mouths, it's about zombies. When an extremely disgusting rat monkey makes its way to the zoo, 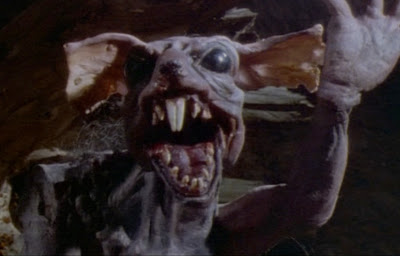 it bites the arm of Lionel Cosgrove's overly protective and strict mother. She soon starts literally falling apart and before long becomes a flesh eating, rotting zombie. In his attempt to prevent himself from becoming a murderer, Lionel does everything he can to keep his mother from doing harm to others. Unfortunately his best efforts do little to prevent a full fledged zombie attack from hitting their tiny town.
I can very much appreciate a film like Dead Alive or Evil Dead II, because they are largely entertaining, staples of the horror genre. For many they are snippets of people's childhoods, and survive as foundations for their future love of horror. Probably owing to the fact that I am not seeing these films until now--I find that I have a hard time taking anything away from them. Yes, they are entertaining, and they are wildly hilarious at certain points but overall I just kind of feel like I'm watching something much too senseless. While the party scene and lawn mower massacre are vital parts of the movie, I just feel like it drags on. 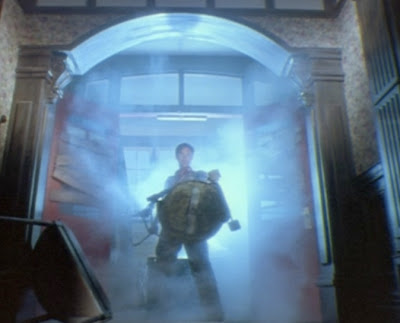 This is what is unappealing to me. I've seen the bits of hilariously gory gore, and I just don't want to see it for a full 25 minutes or however long that scene runs on.
Am I any less of a horror fan because I don't love senseless gore shoved in my face for the duration of the film? Some will I'm sure say yes--and to them I say stuff it. I don't like movies that only have over the top gore and I'm not sure I ever will. I do however love atmosphere, and ghosts, and...beautiful blood and OTHER things. So I am still very much a horror fan alright?!!
Aside from the fact that I didn't love it, I will say that it's going to be very difficult to wash the visions of all that gore out of my eyes. I know it holds records for the most blood used and all that, but when you see it all coming at you like hurricane--it really puts things into perspective. Every single shot of gore, was different from the previous one. Everything is insanely creative, and so amazingly disgusting it's almost impossible to believe. The whole entire time is spent just going, "ewww". What is it about the gore that gets to people's gag reflexes in this? I think it has something to do with how thick the guts are. It's not just a vat of fake blood...it's like a horrible mixture of cottage cheese and mucus. Yup. that's it. 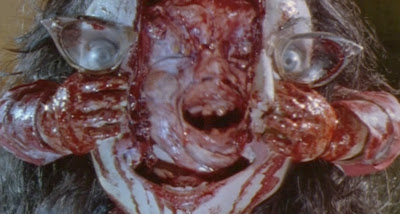 A lot of people talk about the dinner scene and I must say I have never seen anything quite as repulsive as a giant pus wound being squirted into a man's custard. Good lord, that mother was a giant blob of vomit. The best part perhaps is that she was even disgusting when she wasn't a rotting zombie. And then there is of course the end scene which most unfortunately puts the rotting old lady boobs from The Shining in 2nd place in the most disgusting old lady boobs contest. Yes, the winner is Lionel's giant skeleton rat mother's enormous, saggy, purple nipple boobs. Quite frankly---the most horrifying thing I have seen in my lifetime.
I will also say that a zombie baby is amazing, and that the zombie woman who got stuck on the light bulb was hands down my favorite part. 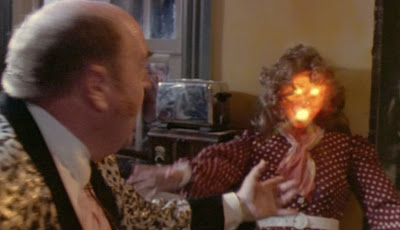 She was like some kind of glorious Christmas decoration illuminating the scene with true wonder. I'll be needing one of those in my bedroom. Oh and also, thank GOD I can sleep soundly knowing exactly what zombie sex is like. 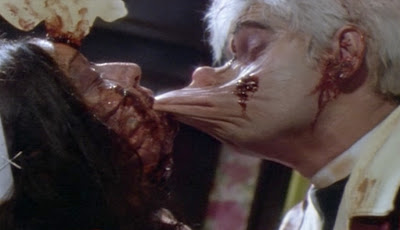 Overall, Dead Alive is an astounding feat of gore and guts as well as a full on comedic romp. For me however that's all it really has going for it, and it's just not enough to win my heart over. It's too silly for me. I'll take my comedy horror hybrids with an extra dose of legitimate scare--see The Return of the Living Dead or even Tremors for more info. Maybe that is my biggest problem with Dead Alive. The aspect of the zombies was never anything scary--just gross. Perhaps the infatuation with zombies as being un-scary can be related to the infatuation with vampires being romanticized. Zombies and Vampires should always be scary. Sure they can still be funny and romantic, but something about them must retain their horror--otherwise I get bored.
Well, this sums up my thoughts.
Posted by Andre Dumas at 5:02 PM

OOH, I forgot to mention whilst we were tweeting that I too was misled by the cover! Not to think that there were innermonsters, but because I was pretty sure that was the face of Geena Davis. And once I learned it was NOT Geena Davis - and that it was supposedly all gore - I avoided it for YEARS.

Good call! I think I thought that same exact thing. Tsk Tsk Dead Alive cover for making a mockery of our expectations!

You break my heart, Andre Dumas.

Aww sorry matango. Different strokes for different folks! I wasn't that surprised about it since it's pretty much how I reacted to Evil Dead II. I think maybe the biggest reason though still, is that I'm only seeing them now. I missed out on that whole building up memories of horror movies thing when I was younger. I did build up some great memories of the Care Bear Movie though.

Well, you don't break my heart. I'm on the same page with you about Dead Alive. Sure, it's definitely entertaining and funny as hell sometimes, but to me it becomes boring because it's just gore for gore's sake.

I have no problem looking at any of the gore as it seems no amount of pus custard can make me feel queasy but I've always wanted more out of this movie. Like you said, I like horror/comedy if there's actually something scary involved. And, like you, I didn't grow up with this film (didn't see it until I was at least 19), so maybe I'm missing that nostalgia factor...

Phew, I don't think I could handle breaking anyone else's heart. I'm glad we can agree Matt. It's all just a personal taste preference really, so no one can fault us for that. And yeah seeing it at an older age definitely has something to do with it. If I was a boy, and oh I don't know say..10 and watching this, I would think it was the greatest movie in the world.

I'm just reading your review of "Dead Alive" for the first time now, Andre (I'm a little behind!)... a few thoughts I'd like to share:

* The film (for me) takes on an added layer when you consider that New Zealand was a British colony for decades... the domineering mother is a metaphor for Britain while the son represents New Zealand ultimately stepping up to find its own way.

* When Peter Jackson was first announced as the director of the Lord of the Rings films, I'd point friends to "Dead Alive" and they couldn't believe such a director would be chosen to helm the Middle Earth saga. But I'd point out that it made perfect sense - there is so much imagination and creativity on display in "Dead Alive" with very little budget - one "gag" tops another - that I think the consensus was "imagine what Jackson could do with a budget!"

* A decade ago I invited a friend over to watch this film while eating Mexican food for dinner. He's never let me live that down since... :)

It's pretty hard to believe this is the person entrusted to do the Lord of the Rings movies. Talk about rolling the dice.