Cube: Math Is a Terrible Thing

I'd been oddly attracted to seeing Cube ever since I looked up Vincenzo Natali on Netflix to check him out. Back when Splice came out I was supposed to go to a pre-screening of the film with a Q&A afterwards with Natali. Seeing Cube's staggeringly high rating on both Netflix and IMDB was exciting enough but for some reason I never made it to the screening. I have since then of course always been excited to finally see Cube and last night I got my chance.

Cube is a low budget film straight from Canada that centers on the premise of 6 strangers waking up to find themselves trapped in a maze of cube shaped rooms. With no food or water the importance of escaping becomes top priority. However upon further exploration of the cube, the strangers find several of the rooms to be rigged with deadly traps, making their escape that much more difficult. Can they solve the puzzle of the cube and escape with their lives? 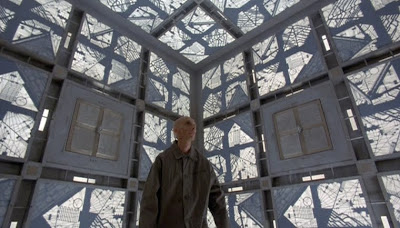 I would be remiss if I didn't say that Cube reminded me somewhat of the dreaded Saw series particularly Saw II. However, it is a much smarter, more intriguing take on the idea of waking up in an unknown structure and trying to escape. The film is insanely claustrophobic and does some pretty miraculous things. I wouldn't say that I love films that trap you within one place for the duration movie. They make me insanely antsy and I feel like I need to take a Valium. Cube however manages to keep you invested throughout every new development, and finds a way to make the story interesting without dragging it on and on. The film also does a spectacular job of filling the viewer with an enormous sense of dread. Cube is one of those films that makes you feel sick for no good reason at all. It is a true test of how effective the film is at maintaining both the characters and the viewer inside of the cube structure.

Something else quite miraculous happens that I couldn't even believe for myself. Over the course of the film, each of characters undergoes a sort of transformation. Just as there are 6 sides to a cube, so does there seem to be many sides to each of these characters. We start off in one position just as the cube does, and then slowly we start to notice that both the cube and the characters start to change. We start off greatly liking Quentin for instance then slowly we start falling out of that until we begin to really despise him. The opposite can be said for Leaven and Worth, who we hate in the beginning but then end up liking. 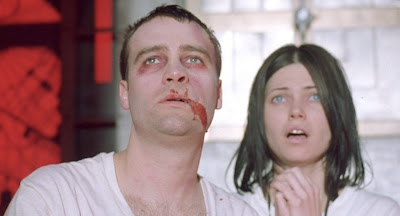 It's all very exciting once you finally understand just how involved the cube theme really is.

The film is also of course wildly intelligent. So much so that it hurts my head because I hate math. In fact, I really hate math. To think that someone logically thought of what the dimensions and patterns of numbers and coordinates and permutations and blah blah I failed geometry in 9th grade---yeah see...things get crazy. All these numbers, and patterns and the idea of rotation is just so incredibly detailed and involved.

Also baffling is that the film was done on a such a low budget. While most of the money must have went to the opening scene 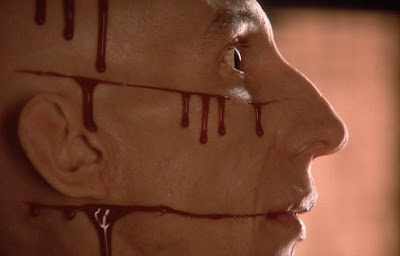 ---which is an amazing opening scene I should add, the low budget barely impacts the film at all. The one place it maybe hurts it is in the acting department, but aside from that, Cube is a truly inspiring bit of film work. It is proof that you don't need extravagant set pieces, and big budget special effects. Although the special effects that were used, and the two main instances of gore were pretty stunning, 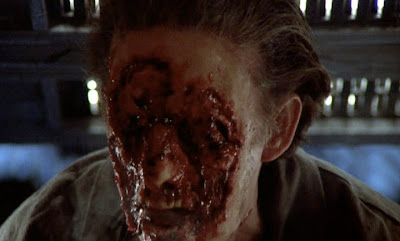 Cube instead depends solely on the character development and the impending doom of a structure we know very little about.


In fact that is another very important thing to mention. Our knowledge of the cube, who built it and why, never changes. For some this is a major downfall but for others it is a big plus. Sometimes you don't need explanation. Especially in a film like this where everything is confined to one structure. Introducing anything to the viewers that is outside of the cube would almost be detrimental. I guess this is a SPOILER...but yes it is in a way aggravating to know that we will never see what lies outside of the cube. Well, who am I kidding, it's insanely aggravating, but it's necessary. All you need to know about the outside of the cube---is that it is NOT the inside of the cube. And that's all that really matters. 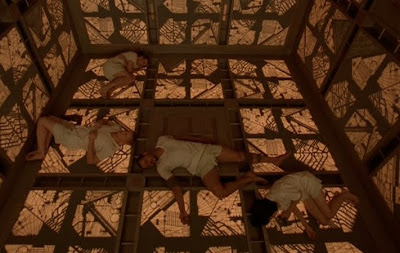 Cube was a truly thrilling experience, and one that I hope continues to impact the way I watch other movies. Check out Cube if you are in the mood for something terrifying in a very unconventional way. While many people were divided on Splice, I think Cube is a film that wins much more appreciation. Give it a shot, but maybe take some Valium along just in case. Oh and chapstick.
Posted by Andre Dumas at 9:53 PM

As a math major I LOVED this movie!! Yeahh it made my brain hurt a lil but when it started out with the guy being sliced into itty bitty pieces I was like OMG OMG I have to find out WTF?? I wish you knew more about the cube but it was such a mind flip that it didn't matter. I enjoyed it very very much!!

This is a great film. Saw it many years ago and recently re-watched and reviewed it for my blog. It really does show that a great concept and smart writing can overcome budgetary limitations.

I absolutely agree that NOT knowing what is outside the cube is instrumental. The lack of that knowledge allows the film to explore its philosophical questions.

I love the Cube movies! I think I saw the second one first, and then I just had to pick this one up. Small movie, but it has an intelligent story and though only a few effects sequences, they are so memorable and effective.

I adore this movie. As you pointed out, the whole thing is simply about wanting to be outside the Cube. I love how the characters are painted as inmates, Natali even went as far as naming them after famous prisons. (Leavenworth, San Quentin, etc.)

In the realm of prisoners dealing with their own fate flicks, this one's one of my favorites.

That probably means I was missing something... dang.

Where you all seemed to have seen character development, I just saw personality inconsistencies. Plus, Wayne Robson as Rennes just made me laugh. I have no idea how much TV exposure the Red Green Show has outside of Canada.. but if you've ever seen his character on that, you'll understand my dilemma.

I couldn't get over the little things in it that were just... wrong. The brainchild is carving in what appears to be a copper plate with... a plastic button? And they have a total of 5 shirts and 5 pants, and they make a rope that's like 50 feet long?

But when (if is a better word, cause I totally didn't)I got past the stuff like that, and the terrible acting, I'm sure I would have liked it a lot more.

Having said that, I held my breath all through the silent room scene. Maaaan.

There are inconsistencies in their personalities because it suggests their different "sides" just like a cube. And while I do agree with you on the bad acting and the plot holes--those were mostly the results of a low budget.

I think on the surface Cube doesn't seem like a huge deal, but I don't know, I guess after I got thinking about it I became more and more impressed...!

Seen all 3 cube movies, all are great in my opinion. And I hate math too.

This movie has a special place in my heart. I was hanging out with my girlfriend at the time, her friend was over and she started playing The Cube on her laptop, almost in the background. I got sucked. in. The two girls did their own thing while I sat there, transfixed.

1) It's intelligent. This is also one of the reasons Tremors is so great. The characters are clever, they come up with solutions, they work things out and deal with it. They aren't just mincemeat for the thing-that-kills-you de jour. There's a discussion happening, an intercourse if you will, between the threat and the threatened, and this adds a dimension of life to a horror movie. Instead of thinking "How is this person going to die?" you're thinking "What's going to happen?" So that sort of intelligence also seems to add a layer of mystery and intrigue.

2) "It is when working within limits that mastery reveals itself." --Goethe

Low-budget, essentially one room filmed over and over in different colors, no information outside of the cube... this movie lives within the pressure-cooker of limits. It speaks to a sort of modesty, the fact that one need not use all the tools available to modern man in order to be interesting and unique. This is the sort of art that we need in this age of capability, instant gratification, and limitlessness. Part of the irony is that this is precisely the kind of art that will not force itself upon you; the value of limitations must be noticed and freely chosen by an artist, whose natural inclination may be to do away with limitations. "Art is the expression of the infinite within the finite."