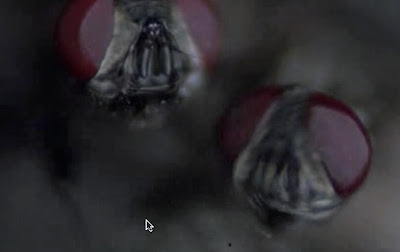 My apartment has a fruit fly problem and it makes me angry. Where do these evil beasties come from? I'm sure they have created a wonderful home down deep in my sink drain or perhaps at the bottom of the trash can where that mealy apple I threw away went to die. In my high school the AP Biology class had a project where they bred fruit flies. Vials and vials full of fruit flies with disgusting little red eyes starring back at me while I tried to concentrate on the less disturbing aspects of Chemistry....ugh. I'm surprised there hasn't been a horror movie about fruit flies. I'm guessing it's because they are so small and pretty much impossible to catch on film--not that I want someone to make a film like that because then I would just puke in my mouth during the previews.

Since I'm used to not getting what I want (we're coming up on my 24th Christmas without a pony), I'll just have to make a list about the next awful thing---real flies. Flies are a terrible, terrible creation. I know in my previous post about the worst spider scenes I was a little harsh on those eight legged disgusting creatures but hey, at least they eat flies. Flies do nothing except mooch off of our leftovers. They're the bums of the insect world with their nasty little tongues sneaking a taste of our delicious sandwiches while our heads are turned away. If you took a midnight stroll through the park you would find them sleeping in their own filth with their hands roasting on a trash can fire (just go with it). If you still remain unconvinced of how gross they are let us take a look at these particular moments from horror.

Having only seen bits and pieces of The Amityville Horror I find it strange how no matter when I turn this movie on, the part I always see is the priest getting swarmed with flies. I've seen a lot of things in this world; gruesome rape scenes, hellish depictions of butt sex, people being fed poop, and Mady Gosselin getting her ears pierced--but I have never seen a mass of flies do something so terrifying to another human being. When Father Delaney goes into a room of the evil house where unspeakable murders took place, he sees a grotesque blob of flies on the window. 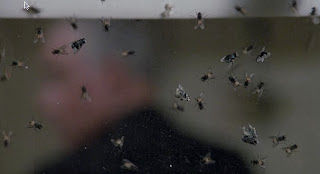 The harder he prays the more the flies seem to multiply and soon they start attaching themselves all over his face. They go in his eyes, his ears and all over his hair...blagh! 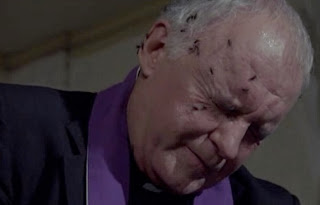 In real time, Rob Steiger had honey put on his face to attract the flies. DO YOU KNOW WHAT THAT MEANS? That means that Rob Steiger really had that many flies all over his face! I don't get queasy from watching horror films very often but this scene makes me feel very ill. The combined buzzing of the flies paired with witnessing them rape Father Delaney's face gives me nightmares and a little bit of heartburn. 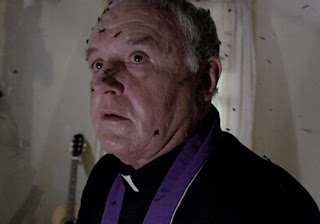 As if realizing that your sweet baby was still dead wasn't damaging enough, finding flies swarming around your still dead baby probably is enough to make you really, really, upset. This scene skeeves me out for a few reasons. To begin with I really hate when she sniffs the baby and then lurches away in repulsion. I've smelt a poopy diaper before and while it may have made me grimace it did not make me lurch away in such repulsion. Only one conclusion can be drawn; this baby must have had diarrhea. Just kidding. The conclusion is; the baby is dead and that smell is her rotting flesh. Secondly the scene where the flies are glued to all the fly paper and on top of the little fly net? Sick. Seriously sick. 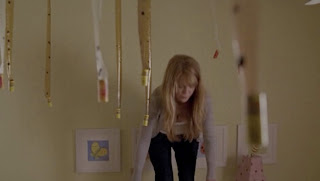 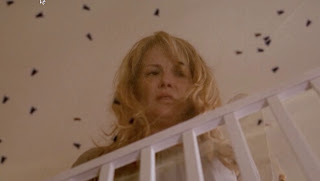 Everything about this scene just really freaks me out. When the fly flies up her nose and then back out? Ugh. One of my least favorite parts about CSI is when they find are looking for a dead body and then see a bunch of flies. It's a sign of very very bad things. As Gil Grissom once said, there is no smell on earth like a decaying body and the large presence of flies always makes me unwillingly wonder what it smells like (garbage on a hot day combined with curdled milk and maybe some Indian food..that's my guess).

Drag Me To Hell
Have you ever tried to sleep with a fly buzzing around your room? It's possibly the 2nd most annoying sound in the world. The first most annoying sound in the world is when my cat decides 3 AM is the perfect time to crinkle up a plastic bag. When a fly is stuck in a room, it's insanely aggravating. I know because I spent an hour trying to kill the fattest fly in the world last week in my sister's bedroom. Imagine then what it's like if you were sleeping and a fly flew into one nostril and came out the other. How about if the fly flew into your mouth?

What about if a gross old gypsy lady barfed up a bunch of insects into your mouth? Yeah it would probably be awful. Also I'm not even sure she's barfing up flies but there are bugs of some sort in there so it's good enough.

The Fly
Clearly the ultimate way to gross out people with flies is by taking one and making it life size. There is truly nothing more disgusting than watching Seth Brundle slowly and painfully turn into Brundlefly. Since I already hate flies, you can imagine my repulsion when watching Brundlefly exhibit such traits as instantly throwing up the minute he touches food. 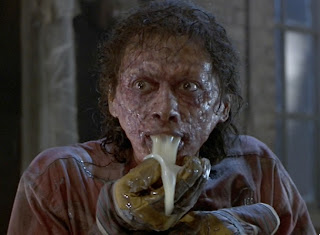 Then there's the fingernails falling off, the teeth falling out 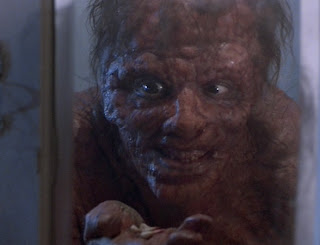 and the gnarly bloody, wrinkly skin and possibly the worst---the coarse, black fly hair sticking out from his back...! Plus I trust I don't need to show this screen shot to convince you that you should never have sex with a fly. 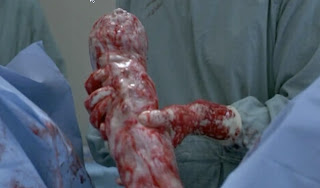 So much of The Fly is difficult to stomach but I often find myself conflicted as I battle with my extreme love for it. If there was ever a movie to end all arguments for why flies are really gross, Cronenberg's The Fly would be it. Heck it IS it because this IS an argument for why flies are gross. And that is my concluding statement. 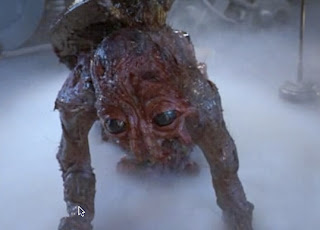 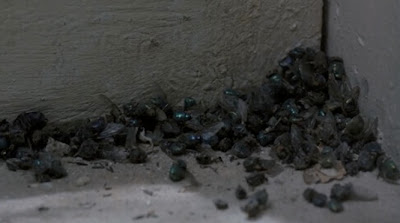 I'm simultaneously happy and repulsed.
Posted by Andre Dumas at 8:43 AM

I don't know if flies gross me out all that much in general, but Cronenberg's movie...UGH!!! Grossest movie ever. Everything about it makes me gag. Even what he calls himself...Brundlefly...how gross is that?!

EEWW I think I just threw up in my mouth. :D

I'm sure I have love for it, I just haven't seen it! There are a lot of fly scenes out there, especially when dealing with dead bodies. These are just my examples of why I think they are gross. And they are very gross...

Grossest part of The Fly was the part we didn't get to see. When Brundlefly asks Geena Davis to film him eating, remember? If I had had to watch him puking the acid on his food and then sucking it back up again, I would have seriously wigged out.

I had an extreme fly invasion last summer and was literally walking into my bathroom, closing the door, and annihilating families with my swatter. I actually did a similar post around then on RIP Pop Syndicate (proving yet again that you and I share a hive mind) and then got really angry because two days later, I watched Grace. Sigh. Anyhoo, nice work.

Haha! I was actually wondering if the subject of flies or bugs made it onto your pop syndicate column! Ew. My fruit fly problem is just not going away, I tried all the house hold remedies, it may be time for the big guns. Pouring bleach down the sink. Ooooh yeah.