Happy Birthday To Me: Wait Whaaat? 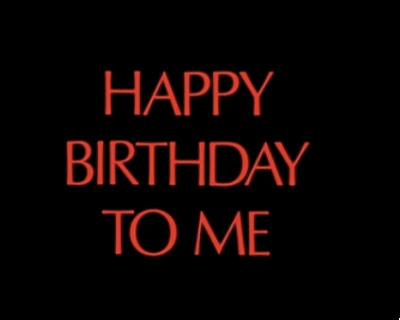 I find it funny that one of the major complaints of Giallo is that no one ever knows what the fuck is going on. This is funny to me because after watching Happy Birthday To Me and previous to this, The Prowler--I also had to wonder...dude, what the fuck was going on? It's not just an Italian thing as I found out today, slasher flicks are sometimes really confusing. I would assume this has to do with slasher's trying to make their plots more interesting--which I am not opposed to. The only problem is when the plot gets really confusing, it starts to feel like it's a little too contrived which therefore upsets most of the film. That being said, while Happy Birthday to Me is quite confusing (I almost had to draw a diagram to help myself) it still retains a lot of its entertainment value and ends up being one of the better slashers I have seen.
Virginia and her friends are part of the Top Ten. This means they are super cool, and super rich. As Ginny's memory from a horrific accident four years ago slowly begins returning to her, and Ginny's friends start disappearing one by one, she starts to wonder if she had something to do with it. The closer we get to Ginny's 18th birthday the closer we get to finding out just what the fuck is going on. Unfortunately we may never know what the fuck is going on. The least of which makes us question--why can't cheerleaders still wear uniforms as detailed and intricate as this? 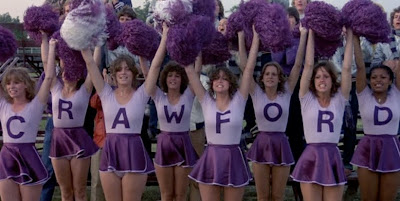 If you know me at all then you know that my number one complaint of this movie is its running time. Horror films, especially slasher movies should really stick to that hour and a half thing or they run the risk of making me sleepy and irritated. I'm trying to figure out why this film runs an hour and 50 minutes, but I can't even remember why it took so long. Ah yes I remember now. There were about 100 red herrings introduced right up close and personal. We're talking at least 10 minutes of a character confessing to a crime that soon turns out to be a joke. I don't particularly mind this so much as it keeps every character a suspect and keeps the mystery alive, but a few of those scenes could have easily been deleted without harming the story in the slightest.
Now, aside from that whole dilemma, there were as many before me have pointed out, some pretty decent kills in this film. All creatively and at times artistically engineered. It would have been nice to get a better look than the .5 second shot we get of the aftermath but hey--we can't have it all. I will say that the blood to method ratio seemed a little off. Especially when a character died by being hit in the head with a fire poker, which resulted in this blood shed. 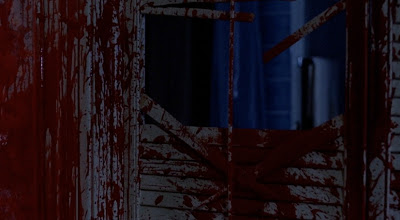 I mean, it's a little much right? Not that I'm complaining, blood is GREAT, but that was some serious blood shed for a little fire poker to make.
I also found that I was wonderfully creeped out by the hospital scene flashbacks. 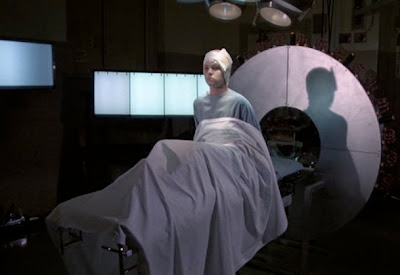 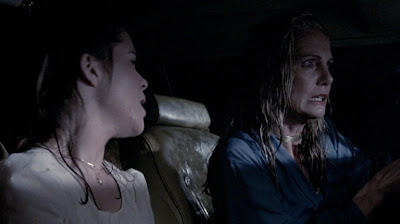 Okay so we've got an interesting story happening here, few can disagree with that. There just seems to be something entirely too complicated about it to me. It's definitely a movie that has you guessing until the very end what is going to happen. There are twists and turns and right when you start exclaiming how predictable it all is, some other crazy thing happens and you eat your words. And yet--it still just feels like too much for me. I wonder if anyone else can agree with me on this or not. It's not that I didn't enjoy what was happening--it's just that when the big reveal happens, it's almost too crazy to think about. I mean, did that really happen the whole time and we didn't notice?
I'm about to go all SPOILER on ya'll right now. Okay. You know me and my confusion that revolves around what character's look like and blah blah I'm an idiot etc. For at least 5 minutes after Ginny's "half sister" was introduced I kept being like, "Who the hell is that?!" I really had no idea that that was Ann. She looked different okay and if she hadn't been wearing that blue sweater, I doubt I would have ever made they connection. It would have helped maybe if Ginny said her name or SOMETHING. It also didn't help that those too looked kind of similar from the get go. The really confusing thing that happened though was that I could not for the life of me figure out how they were half sisters. This is where I needed to draw a diagram. I'm assuming it was some Ann's Dad knocked up Ginny's mom thing or something. But all this time Ginny's real Dad wasn't even her Dad?! I'm still going nuts to try to figure this out.
Aside from that family problem, I can't really see how Ann's mask was THAT good of a mask. Obviously it wasn't a mask, it was the actual actress but come on--this isn't Mission Impossible III. Masks that look that real just don't happen! The whole reveal was almost a little too twisted. To the point where it almost feels like they were searching for the trickiest plot they could muster just so that nobody and I mean nobody could see it coming. I tend to get angry when reveals are so out of left field like this because we get virtually no clues that would ever leave us to guess what happens. It tends to make me feel a little bit cheated okay?
Now apart from that, the ending was amazing. That shot of all the party guests dead around the table--pure delight. 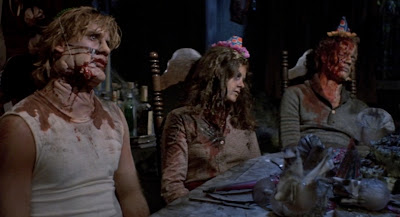 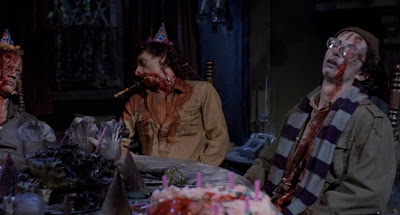 The happy birthday singing, the corpsey mother...oooh it was all so wonderful.
Small annoyances aside, Happy Birthday to Me was a pretty surprising hit for me. Although I came to resent the Top Ten's "games" and what they consider to be a good time--OH and why was that blonde girl just standing out in the rain all weird. Huh? Oh right I liked this movie. Well, all movies have problems (Except for Pee Wee's Big Adventure) and Happy Birthday To Me is clearly not immune to imperfections. I still appreciate it for being a highly interesting and entertaining slasher movie. One that does not leave us with a boring final girl or side plots that bear no significance to the final outcome. Hooray!
By the way. I think there's a new Wizard Master in town... 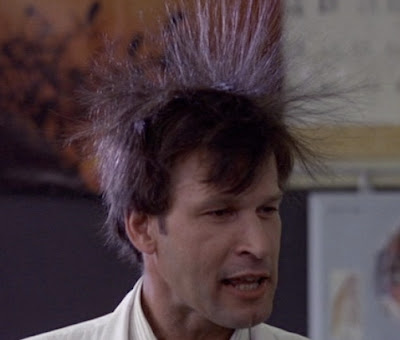 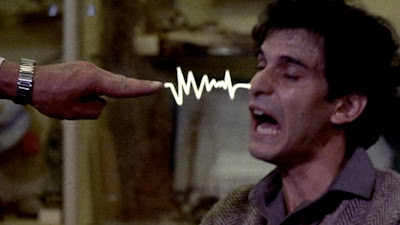 I love Happy Birthday to Me. It's one of my favorites from the slasher genre, but I tend a love/hate thing with the ending. I love it 'cause it's just so out of the blue, but I hate 'cause it just doesn't make any sense. Oh well, the a lot of things don't make any sense. Haha. Great post!

I too enjoyed the ending, but found the movie too long for what it is. And that scooby doo ending made the whole film feel so freaking silly to me.

Also, the ending with everyone dead on the birthday table felt very Friday the 13th-ish.

Still, a fun slasher, nothing astounding, but fun in deed.