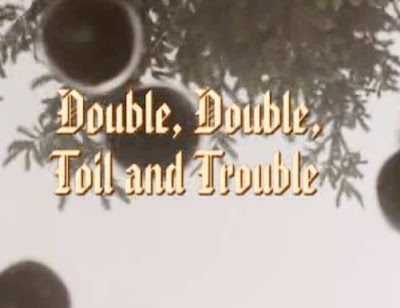 I really hope that when I was little, I did NOT find Mary-Kate and Ashley's little "jokes" funny. They annoyed me in Full House and they annoy me again here. It's weird...it's almost like they were always the least favorite character in every single thing they've done. Strange. Why were they so popular again? Anyways. I hadn't seen this since I was a wee one, and could remember nothing about it. It's a pretty putrid movie (obviously) but I did find it so delightfully awful that I was laughing through most of it--which is always a plus. There are few things that can bring me more joy than a pumpkin carving contest where this happens. 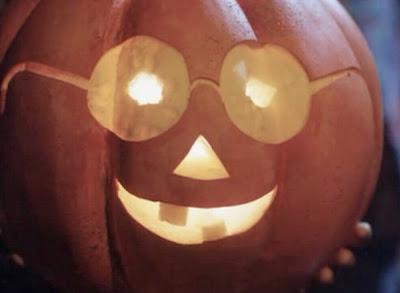 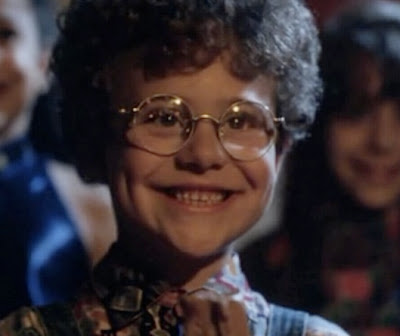 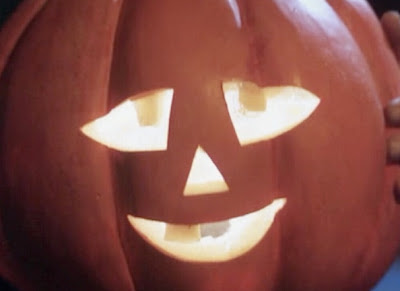 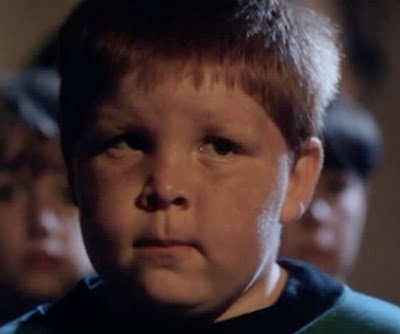 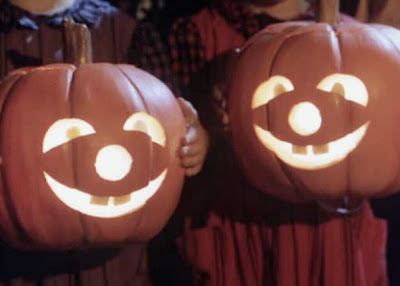 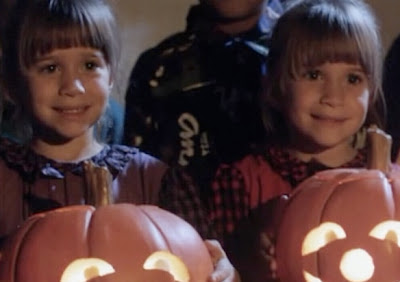 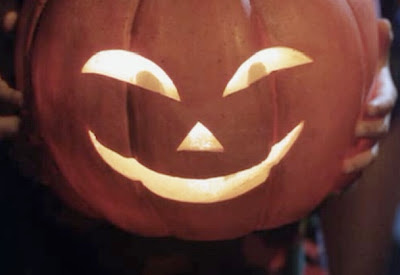 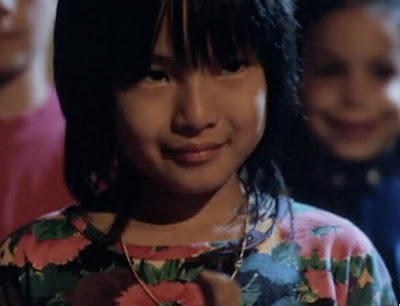 Hahahah. I couldn't believe it either.
Anyways, while the Halloween atmosphere kind of veered off after this Halloween themed birthday party, these beginning moments were pretty impressive in their ability to make me recall well....birthday parties in October. Thank you for asking yes, my birthday is in October so I'm mostly recalling my birthday which was always a sensational event.
In case you wanted to know what Double, Double, Toil and Trouble is about, I'll tell you. Kelly and Lynn are twins and they hate it! After their parent's unsuccessfully ask their Great Aunt Agatha for a loan, the parent's are forced to tell the girls that they might lose the house. While at Aunt Agatha's however, the girls listen to a story told by a gravedigger. He tells them that Agatha once had a twin sister named Sophia, whom she trapped in the mirror and sealed with the magical moonstone. The only way to get out Sophia is to get the moonstone and break the spell at midnight on Halloween. The girl's decide the only way to get the money is to free Sophia and let her give it to them. They then embark on a wild journey to find the moonstone and bring Sophia back.
So what did I find gleefully entertaining? Let's see....
First off the gravedigger was obviously my favorite character. This is because I only had to take one look at his face and listen to him utter one word to figure out who he was. 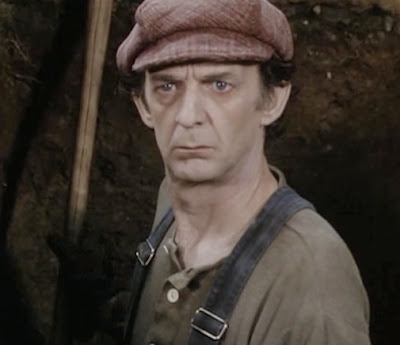 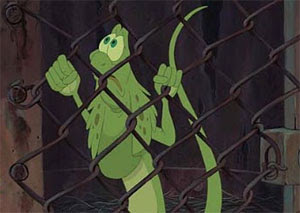 Yup he's Frank from The Rescuer's Down Under, and it's pretty obvious now that he was just playing himself in that movie--which means he's just a funny little green lizard in real life too.
This movie, like Full House, embraces the idea that if you put wigs on Mary-Kate and Ashley---no one will know who they are. 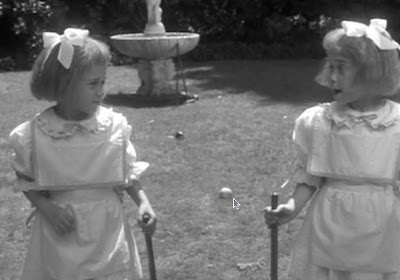 It's in black and white because it's a flashback.
....do YOU know the way to win children's hearts? Why, just give them a midget clown of course!! 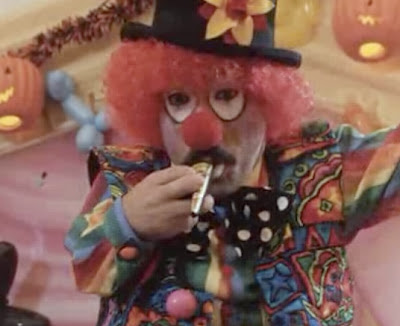 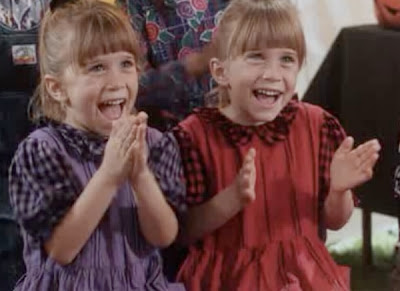 Seriously. Why would kids ever be that excited to see a midget clown? I would be peeing my pants immediately. Heck, I peed my pants just watching this. Things got a little better though when the twins stumbled upon this house. 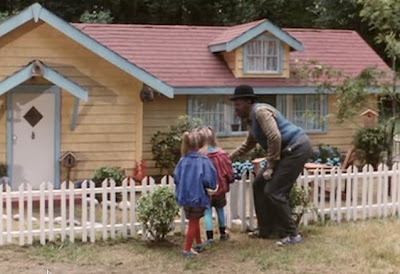 Hmmmm I wonder who lives there? 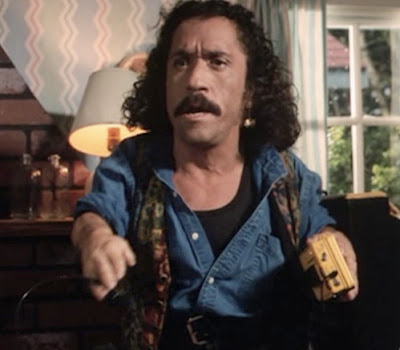 Ahhhh midget clown without clown make up!! Just kidding, I love little people. And Oscar kind of grew on me as time went on. But then I looked him up on IMDB and found out that he was a scary midget in Something Wicked This Way Comes!!!! And why wouldn't he be, since every midget in the world was in that movie.
Did you know that when witches get together to cast spells on Halloween, they have their very own glee club? BELIEVE IT. 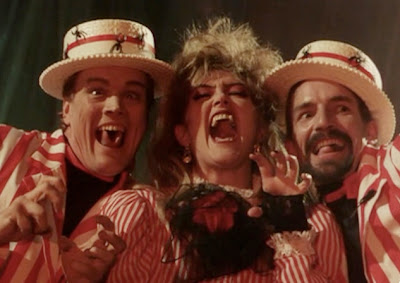 Evidently, an easy cost effective way to simulate a bubbling cauldron is by using...dish soap. 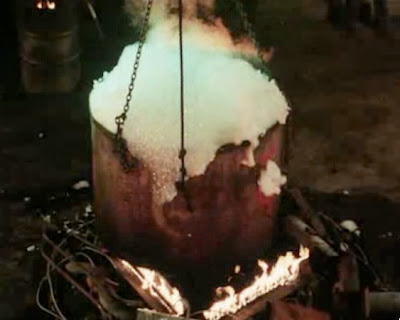 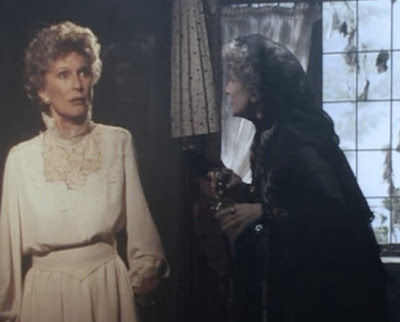 She got to play both the good sister AND the bad one. Don't you love it when that happens?
........What in the shit is this? 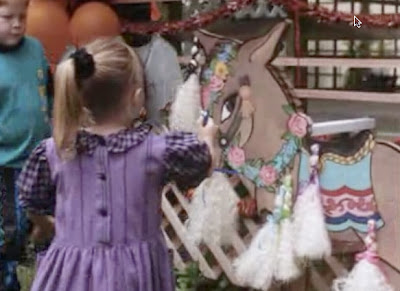 Who has a pin the tail on the donkey game that looks like that? Real tails? Life size? Jealous.
Well yeah, that's pretty much it. Although it was a terrible movie, I suppose it did bring back the slightest inkling of Halloween spirit. I'm not crazy about the portrayal of the bad witches, or little people and I'm still confused about why that homeless black guy had an English accent. I feel a little silly giving a criticism to a Mary-Kate and Ashley movie, but oh well, here goes: I wish they would have shown MK and A doing a little more magic. I thought that was the whole idea behind this movie. They only used magic like twice. And instead of doing something cool like using magic to fly they used practical solutions like floating the midget up to the window with balloons! 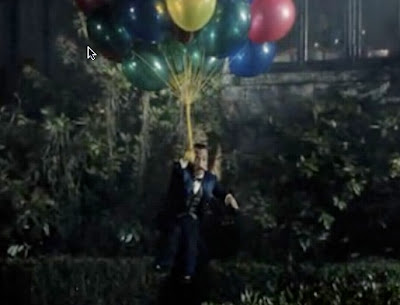 ...I've changed my mind. That's the most magical thing I've ever seen!
This has nothing to do with the movie but it is officially the best YouTube video I've ever found. Apparently these people failed to notice that this song choice makes little sense when there is no brother to be had. But oh well it combines my love for Full House and my hate for older Michelle Tanner. Sigh.
Posted by Andre Dumas at 9:00 AM

Hahahahaha! I'm still laughing from reading that post! I seriously LOL'd at the Chinese pumpkin!

And that midget clown looks like a cross between Danny Trejo and Chico from Chico and the Man.

See? This is why I wish I had been born later, I missed all this good stuff.

I remember this movie! My mom became obsessed with buying me Mary Kate and Ashley Olson videos when I was a kid, because she thought they were cute...Terrible, simply, terrible.

Hey, great article! I really like your use of research and humor, adding all those pictures and links really make for a good and fun romp through an old classic, er, film. Odd how these little movies interconnect the different films and filmmakers and you find actors appearing in projects from other projects and you're left wondering, what was that?

Anyway, making my rounds from the LAMb Halloween round-up, thought I'd drop over and say hey.

I haven't had a chance to write a Halloween review yet, not sure I will, but of course I'd invite you to drop over to my blog just the same - let me know what you think.
cheers->

NO. This movie was amazing.