What I'll Be Watching This Halloween 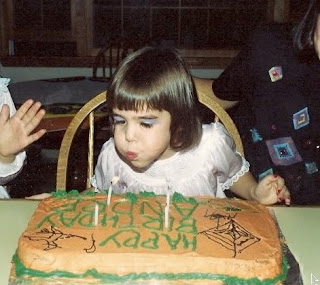 For many horror fans, October means packing in as many horror films as one can handle. For me, October is about going back to my roots. In Africa. Just kidding. I mean my roots as in when I was little in scared of everything. Many of my horror buddies find it funny that I am such a big scared-y cat. To many of these people I lie and say that I used to be a scaredy cat....but as we all know I am still one. While I used to love getting dressed up, I kind of used to dread going out Trick or Treating because I was scared. There would always be that house with the gag set up where someone was pretending to be a statue and then BOOM! Princess costume peed in. Or there would always be some haunted house that I would refuse to go in. These houses always had something really awesome at the end like a treasure chest full of candy or perhaps a new puppy--but I always missed out and stayed behind with my friend's mom in the mini van.
Due to this, it's pretty clear that I would usually stay far away from straight horror movies. I did however love a few movies that will always make me think of my childhood and yes even being scared of kids movies. So this Halloween, in between my regularly scheduled programming I will be watching these gems in an attempt to get my childhood back. And because I don't want you to feel too jealous, I'll be doing a special little post dedicated to each of them. Woohoo!
The Worst Witch 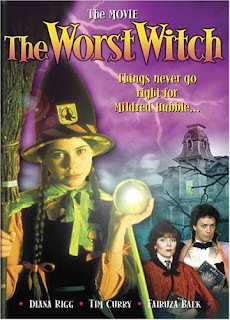 I'm not sure if I was obsessed with this film because of how neat it was OR because Tim Curry's presence was as delightful as a bucket full of sandwiches. 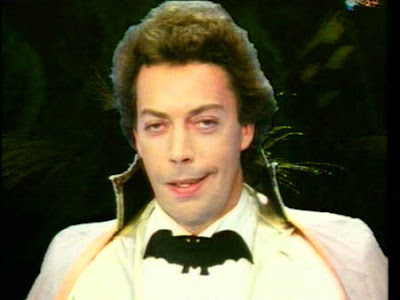 The latter I'm sure. Nowadays I can't even watch his scene with turning away in full on embarrassment. Oooh the singing, the terrible special effects--why is it so darn magical? This movie is filled with Halloween excitement, right down from the evil witchy goodness, to the scare game the girls play and the learning to ride broomsticks. You'll find the slightest bit of inspiration here that JK Rowling surely used to create her famous wizarding world. This movie just screams nostalgia...and I'm getting it on Netflix very soon. YEAH!
Halloweentown 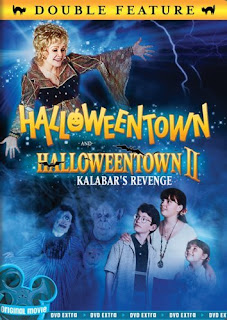 I used to have an unhealthy obsession with Disney Original Movies. Motocrossed, Rip Girls, Smart House, Brink, Zenon ahhhh the memories just keep on coming back. Halloweentown in particular is a movie that I probably shouldn't have loved as much as I did being the age I was. It's a little cheesy but hey--I love it. It's full of the kind of Halloween-like atmosphere I wish more horror films had as well. And even though my opinion of what is scary is slightly...below average I still say there are quite a few of oddly creepy moments in this. Besides, who wouldn't love a town that celebrates Halloween all the time?
Hocus Pocus 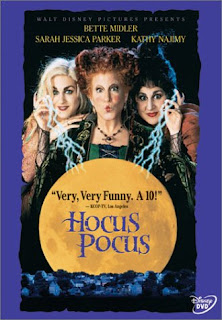 As far as Disney movies go, Hocus Pocus is pretty bad ass. With all this talk about virgins and black flamed candles, spell books bound in human skin, and giant boobs--it's a wonder they play this movie as often as they do on the Disney Channel. Naturally I love this movie because it takes place in my stomping grounds of New England--but it also invokes what I think is the most Halloween spirit of them all. Also as part of my birthday celebration this year, Emmy Doomas and I are heading to Salem and I just can't wait.
The Adventures of Ichabod 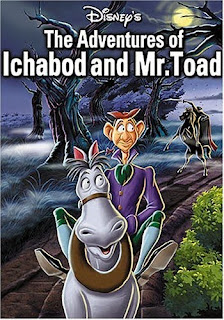 I'll admit I have not actually seen this since I was a wee one, but I've been meaning to ever since. I like to think that much of what I know about the Headless Horseman is because of this film. I also like to think that my deep fondness for Tim Burton's Sleepy Hollow also is because of this movie. It only makes sense that the right time to revisit my old friend would be during the Halloween season.
Double, Double Toil and Trouble 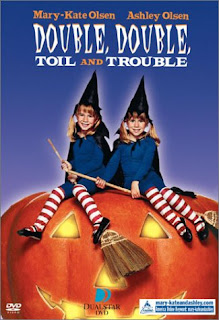 Again, I have not seen this in a really, really long time--heck I don't even remember what it's about. I do remember however that I used to watch Mary Kate and Ashley Olsen's detective series, and whatever their Christmas movie was called--just about everyday. I'm assuming I used to watch this as well but there's only one way to find out.
The Monster Squad 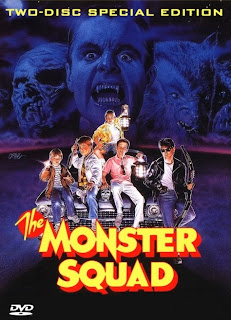 While not quite having to do with Halloween, The Monster Squad is one of those rare semi-horror movies that I used to love as a kid. Every time I went to the video store with my Dad I would have him ask the people if they had that "monster club" movie. They always did and I always watched it. It was just the right kind of scary movie that didn't make me cry and plus it always made me want to be one of Dracula's brides. It lives on today as one of my very favorite films and one that I make sure to watch at least once a month.
The Witches 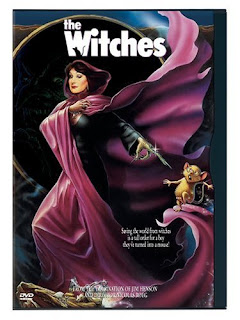 Again, this has less to do with Halloween and more to do with the kind of being scared that I enjoyed. I still find today that The Witches is one of the ultimate scary movies for kids to watch. I will never forget those eerie little girls trapped in paintings, or the Grandmother's stories about witches when she was growing up. The TV gods were kind enough to play this on Halloween last year and you bet your bottom dollar I was watching it.
Bedknobs and Broomsticks 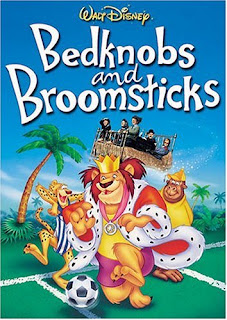 This was always a favorite of Emmy Doomas' and I's. We used to have a bed-knob that would come off when we were little so we would always pretend our bed could fly. Naturally I don't remember anything else from this movie aside from that aspect, so I look forward to revisiting this on a cold autumn night with Emmy Doomas by my side.
It's the Great Pumpkin, Charlie Brown 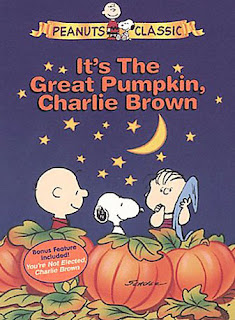 Would you believe it if I told you that I have never seen this? Well maybe I did one time but I don't remember it. I guess I haven't really seen any of the Charlie Brown holiday films now that I think about it--but I always did find that Charlie Brown so charming--so this must be fixed!
Posted by Andre Dumas at 4:52 PM

Witches still give me the jebbies!

I was scared to death of the Legend of Sleepy Hollow cartoon when I was a kid.

I think I was too Dod, but I can't remember why. I'm so excited to find out!

Ooooooh, I love Hocus Pocus and I always watch it on Halloween (this year will be no exception). I love Thora Birch's character, and I has such a crush on Max when I was younger.... and I love cats, so Thackery Binx is the bomb! ....which reminds me that the next cat I get I should name Thackery Binx, or I could change one of my cats names...hmmmm, one of them is black so it would fit.

I haven't seen Double Double, Toil and Trouble in such a long time, but I remember enjoying it, because I did watch everything that the Olsen Twins did, like Billboard Dad and the Christmas one was To Grandmother's House We Go, and those TV series that they did after Full House ended, and also Full House of course.

I love the idea of going back to your childhood for the holiday!!!!

Ah yes that's what it was called, To Grandmother's House We Go. Sigh. You know, it's weird. I hated Michelle when she (they) got old enough to be annoying and bad at acting. But I did LOVE their TV show and movies like nothing else. Very odd. Little Michelle though--was a genius.

I hated it so much when Michelle would say "Don't worry, be happy" all the time on Full House. Luckily Jesse was there to put me back at ease.

I think a little Tim Curry is practically a requirement during Halloween. I may be watching RHPS this year.

I also snagged a couple of VHS tapes last week--Frailty and Near Dark. It's been ages since I saw either, so I think I'll make those my Halloween treat. :)

I'm pretty sure that's one of the best pictures of Tim Curry ever...that man always looks like he's tripping.

John Stamos makes everything better Matt. But WAIT I like Michelle when I think she is in that stage...I like her up until she's like in...first grade? Right when she starts saying smart kid things to Gia the whore. Yup right about there.

Forgive me Rabid Fox but I can't even figure out what RHPS is?! Oh Rocky Horror Picture Show DUH. I was having such a senior moment there. Tim Curry of course!!!


Oooh M. Hufstader...when I get the Worst Witch tomorrow on DVD, I will take screen grabs that will drive you wild. His musical number in that...basically the best thing that has ever happened to me.

We'll be watching Hocus Pocus as well. It's a cornerstone of Halloween fun for us 90s kids. We'll also be watching Halloweentown I and II.

I still watch Hocus Pocus all the time. And I used to love The Worst Witch when I was a kid but haven't seen it since. I got the DVD recently and plan on watching it soon. I'm pretty excited about it. It's gonna be totally embarassing.

Last Halloween I watched It's The Great Pumpkin, Charlie Brown and The Legend of Sleepy Hollow for the first time since I was a kid. It was really great to see them again, but the Sleepy Hollow one was kinda disappointing. It didn't even have dialogue. It was all singing. Definitely didn't remember that.

Ha! I vaguely recall the singing aspect Mikey...I think I can even remember the tune of one of them. Oh boy oh boy!

My October isn't right until I watch "The Worst Witch". My absolute favorite movie, been watching it since the 80's. I've even got my daughter hooked on it and we watch Tim Curry's musical number over and over. :)