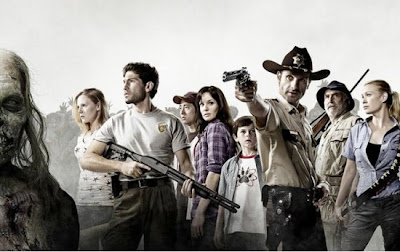 The best zombie films start quietly, and evidently so do the best zombie shows. In what can sometimes be a genre that gets consistently overpowered by intense action scenes, and chaos surrounding the inevitable zombie apocalypse, the quiet and calm start to AMC's The Walking Dead is nothing short of unnerving.
I admit to having a less than warm reception when talk started happening about The Walking Dead. I blame this of course on the recent idolization of the zombie genre. Back when zombies were still considered to be terrifying---they were pretty cool but then people started getting major boners whenever the word zombie was mentioned, and they soon began to lose their appeal. Maybe it's because I want to hate everything that's popular, maybe it's because I feel like I have to. Whatever the reason, zombies and I seldom got along with each passing day.
The Walking Dead especially made me weary, as I found the sneak peeks to be a confusing notion of, "Wait a minute, haven't I seen this before? Is this the Americanized version of 28 Days Later?" I began to make assumptions in my head and began touting the show as just another car attaching itself onto the zombie train. Having not been familiar with the graphic novel the show is based on, I guess I couldn't really make those assumptions and sleep well at night. Once the pilot started to get rave reviews, and I realized that hey, I would like to have a critically acclaimed horror TV show back on the air--I started to relax a bit. Add that to the very comforting notion that AMC has been spitting out amazing show after amazing show and I was getting more excited by the day.
Now that the premiere has come and gone, I think most of us are doing the celebration dance of the century. The Walking Dead quietly made its mark---flooding our eyes with some of the subtlest images of horror imaginable. We are given a character that we can feel close to immediately, as we are kept in the darkness just as he has been. We like him have no real clue was is happening, or why. We feel connected and are practically able to share the smell of the rotting flesh with him. 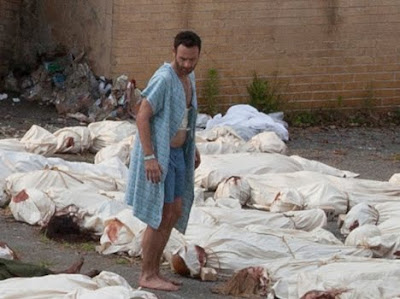 Suffice to say it is a good sign when a movie or TV show is capable of giving me a mini panic attack. Filling my head with what if scenarios. What if I woke up alone, and frightened in a hospital and found a similar massacre? I often rave on and on about how a shark attack would be the scariest thing in the world, but now I'm not so sure. Complete isolation, unbearable loneliness and no possible idea of how it happened might just be a little worse.
I could not believe the nightmares that kept piling up. Practically every single shot was just as terrifying as the next. Finally, zombies had returned in their most terrifying form. Slow and ambling, menacing simply because of what they are--zombies so scary, I could kiss them. Even more wonderful was the reemergence of characters that we cared about. Characters that we rooted for, that we feel for and that practically made us cry. Finally we are given characters that show actual emotional upheaval at the very thought of killing their loved ones. Surprisingly for a show about the zombie apocalypse, The Walking Dead may just be the most realistic show out there.
So welcome to the best new show on cable. AMC has done it again, but who was really surprised? Needless to say, The Walking Dead has made me insanely eager about Sunday nights. And thank god, because church was getting really fucking boring. 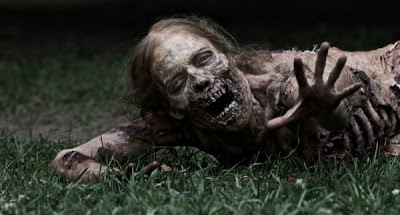 This six-episode season will pummel ALL.

Wow, your review sure went up fast!

Course, being down in Oz, you'll probably be blogging the premiere of the second season when I finally get to see this, so no more talk of what is surely to be my new favourite tv show!!!

At first, I was cautious of the show, too. I've been reading the comic since it came out, and Robert Kirkman has created a tale that features one emotional blow after another. When I heard Frank Darabont was attached and Kirkman was a producer, I was more relieved.

Last night, my hopes were realized. The emotion and the detail -- wow, right down to the flies.

What a great debut. I can't wait to see what unfolds in Season 1.

Watched it this morning and I thought they did a good job on a several fronts. 1. They did not go for the jump scare which although effective and have a place in horror are a cheap way to scare. 2. They built dread well in the series, by reducing the use of music and allowing that alone feeling particularly when Rick is wandering around, quiet equals scary. 3. They stuck pretty much to what will define the character, just enough but not too much, I like leaving in Rick going back to finish off the torso zombie. It so defines where he is at the beginning of the series. He does not want to leave it crawling through the world but instead makes a special trip to put it out of it's misery.
Overall really liked the first episode, I really hope they don't spend too much time on the Rick / Shane conflict, I really just hated that part of the story. I do see that they can't help but moving through it, but it is just so ugly.

I only skimmed the post because I haven't watched the show yet, and you might have come to realize this yourself at some point in it, but I'm pretty sure the graphic novel's hospital-wakeup beginning was written first. I think the story is that both were independently conceived though.

John--This review is generally spoiler free, more of just a sigh of relief that it doesn't suck is all. My point about the 28 days later thing is that that was my first impression--which has after finding out more about the graphic novel been lifted of course! Thanks for the heads up though. Watch it soon!

I'd love to see this, but whatever channel in Canada it's on I don't got. I guess I'll have to hold out for the DVD release next year.

While I am a total gorewhore, the thing that separates good zombie films from the bad ones is characters. The appeal is watching how a specific group of different types of people react to the situation. How they deal with each other. The Walking Dead Books are just that! Completely character-driven. And from the looks of it, this series is gonna be just as incredible! Next time you're in church falling asleep, remember...Jesus was a zombie too!

I was a little cautious at first too but to was when Andrew Lincoln was attached that my fears were calmed. Lincoln has made some excellent TV shows here in Britain and is an excellent actor in his own right.