Well if no one has told you yet, it's time I let you know... Thursday marks the 24th year of my existence. Since my birthdays have never really been great (I blame 14 being an unlucky number for me) I've decided to step things up a notch and turn my birthday into a birthday week. That way, if something crappy happens one day, I'll still have 4 other days to make it work. So on Monday, Emmy Doomas and I ventured off to the mystical land of Salem!
Sure we had taken numerous school trips here, family trips, trips in my dreams etc, but it was time to return. A while ago I did a little post on cool things that freaked me out and one of those things was the Salem Witch Museum. Thanks to Emmy and I's bad planning skills however, we really only saw...The Salem Witch Museum. I mean, we walked around and stuff but we didn't really do that much. We saw some cool things, including a very scary man dressed up as either Count Orlok or Mr. Barlow (Hard to tell these days, all though he was a bit blue tinged so I'll guess the latter) and we also saw an albino child and a man wearing a skirt. Well okay the albino child and the kid wearing the skirt was actually at the train station in Boston, so that doesn't count.
Anyways enjoy this lovely photo journal of me and Emmy's trip. 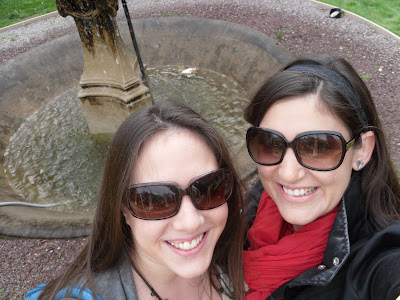 Starting off the trip with a classy pic in front of the glorious fountain at our apartment. 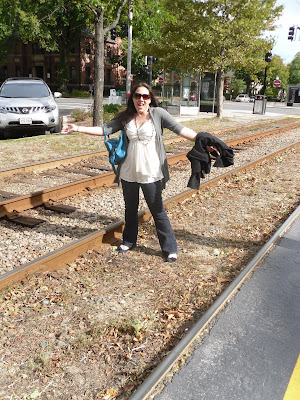 Just proving that I'm not a scared-y cat anymore is all. 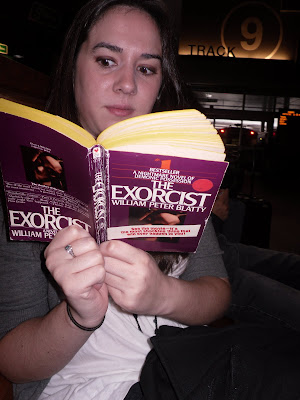 I can think of few better books to read while waiting to board the train. 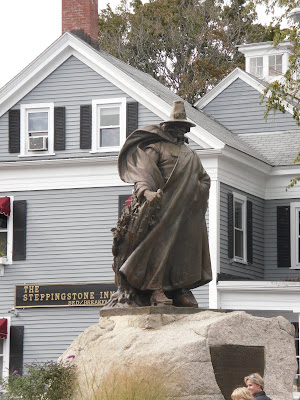 The majestic statue of Roger Conant--the founder of Salem! 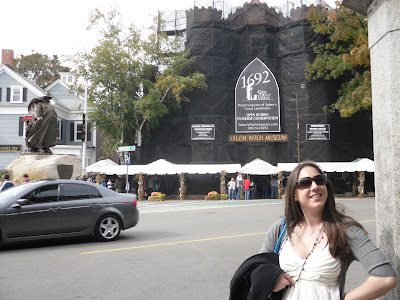 Columbus Day was probably not the greatest choice for spending our dayaway in Salem. Place was packed! We got tickets for the 3:30 show of the Salem Witch Museum, which left us with 2 hours or so to kill... 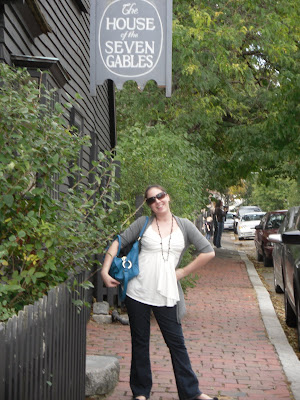 Next we headed off to The House of the Seven Gables. Which we should have gone into but the price was daunting. Of course Emmy Doomas let me know AFTER that she would have just paid it. Well jeesh! 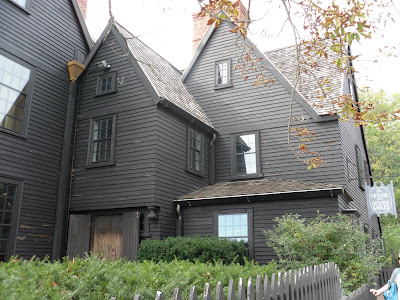 We snuck around the back instead and this was all we could see. 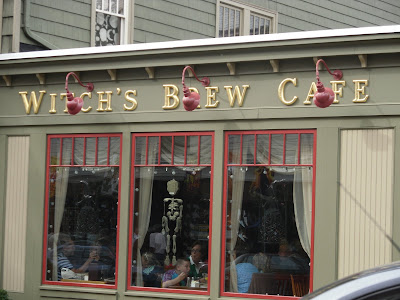 We did not go here, but I do love how everything gets a special witch shout out in Salem. Even though there were no witches...just crazy girls. 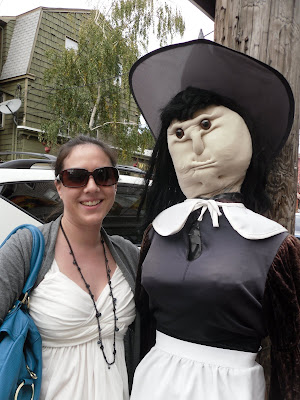 I saw this lass tied up to a telephone pole and decided she was amazing. 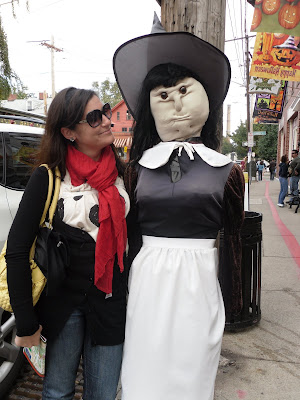 I tried to make Emmy grab her teat but she got embarrassed. 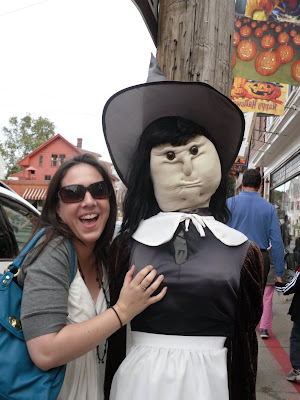 Naturally I couldn't let an idea like that go to waste. Notice the family behind me. I waited till they passed before embarking on my naughtiness. 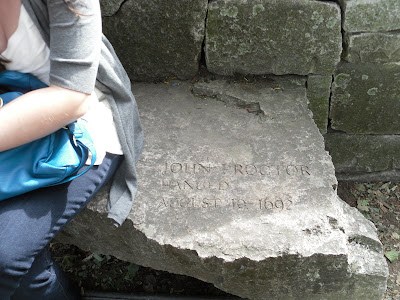 At the Salem Witch Trials Memorial, where the peeps hung got special benches to commemorate their lives. Here I sit on the bench of my late friend John Proctor. 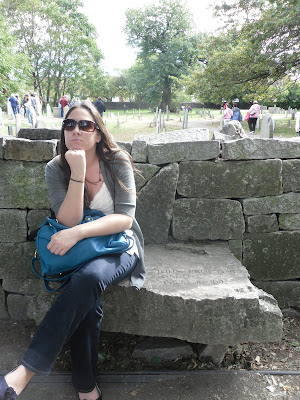 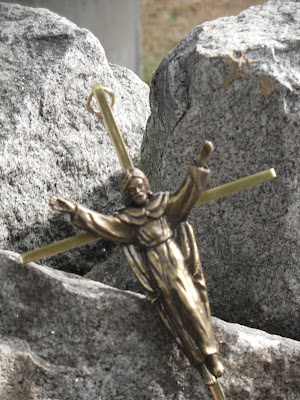 Then we found a creepy crucifix stuck in the stones behind me. LEAVE JESUS OUT OF THIS! 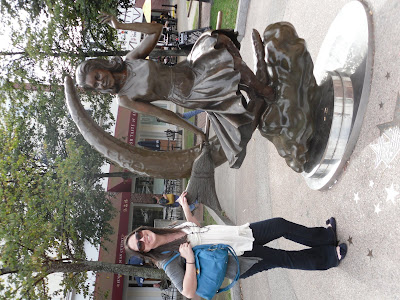 Why is this sideways? I already rotated it. Grr well you will have to turn your head to the side to see the wonderful statue of Samantha from Bewitched. Which was not set in Salem...what are you doing here Samantha??! 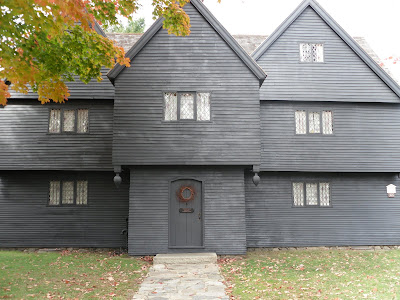 And here is the "Witch's House" titled such because it is apparently the only building with direct ties to the Salem Witch Trials, tis the home of Judge Jonathan Corwin.
At this point our 2 hours had passed, and Emily and I finally got to go inside the Witch Museum, which was just as creepy as I had imagined. The wax figures especially do so much to really, really make me feel yucky. Some of them are in prime condition and others look like their faces melted on a very hot day. Odd really. The scariest part about the Museum though was that the guy in front of me that smelled like stinky cheese--oh and the DEVIL in the museum presentation. His eyes glow red and the man that narrates says scary things about evil and him coming to get us---or something.
After the museum we headed off to the Tavern at the Hawthorne Hotel and grabbed some dinner, then said goodbye to the cute little seaside town. While we didn't see a whole lot, it still made me feel all warm and cozy. So many cool little shops, and weird people that think they are witches running around. We did get to see where they filmed the one scene from Hocus Pocus though and that was exciting for me. I also saw some cute dogs. And a baby. All in all a fun little day-cation that seemed like the perfect way to ring in the start of the birthday celebrations! Oh and I'm raising my future family here whenever THAT happens.
Posted by Andre Dumas at 10:00 AM

Looks like a fun. And how bad-ass is it that they have a statue of Solomon Kane in their town? ;-)

Firstly, happy birthday week. I'm so jealous of people born in October, but since I like you, I wish you well.

Secondly, I went to Salemn with my mom when I was about 14 and had a blast. Wax musuems rock, plain and simple. Not sure if I went to that museum in particular, I definitely went to one there that had its charms. Neat place to be in October!

I think I went there as a kid! When the Devil's statue thing gets lit up do they talk about how 17th century folks thought that he was really about in the world? I remember being disappointed when they moved on in the presentation, as I wanted to hear more about Satan. Satan's like, hiding behind a tree or something right?

This made me all nostalgic to when I went to Salem oh so many years ago. It's such a great town, I'd love to live there as well!

The House of Seven Gables is cool - I'm guessing it was a lot cheaper to tour when I went, cause my hubby's pretty cheap! Both it and the Witch House have such low ceilings, I felt like the 50 foot woman or something.

And I'm guessing no matter when one would visit, there would always be a kid's school field trip or something! And what the heck, witches are an ADULT theme, get them there kids outta there!

Remind me to tell you of my weird experience at the Witch House sometime. Freaky.

I dearly love Salem. Have you been there for the Halloween parade? Probably one of the most chaotic places I've been, but man, so much fun!

I used to go to Salem quite a bit on Halloween, which was only partially awesome because all we did was get hammered and hang out at bars and lame clubs dressed up like assholes. I prefer to do the sight seeing and shit like that when I go there. I also love toughing stuffed witch tits too...they're so soft, it must be magic!

Hi again,
Big D here.
.... What can I say? Am I to believe you are a 24 year old female??
Ee Gad! I thought you were a wizened, gnarled, horror veteran of the 30 something stable, who wears plaid shirts and sports a beard you could lose a badger in.
I stand corrected.
It would also explain why you think they say 'Nards' in Monster Squad instead of 'Nads' :P
Regards,
Big D

Gosh damn Big D as I told you in my response to your Monster Squad comment-- they DO say nards. It's the point of the whole joke, see this T-shirt for more details http://www.fright-rags.com/wolfmans-got-nards-p-24.html