I sometimes think about how I used to be put off from buying certain products based on the creepiness of the man on the front. If you think about it there does seem to be a staggering amount of commercial mascots that are creepy and that are MEN. The only women I could think of, I liked...Mrs. Butterworth--she's a peach, Aunt Jemima-- racist but still nice looking. The only questionable one was Wendy because I don't love gingers, although she does have a certain Pippy Longstocking's thing about her so I guess that's okay.

Yes, I think that companies should pay better attention to making all mascots non-creepy. Stick to animals or cute little elves and you'll be fine. The following list is a compilation of all the commercial mascots that I've been creeped out by the most. As luck would have it most of these would be awesome Halloween costumes...who knew? 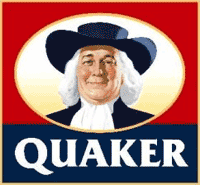 Chuckie from Rugrats was famous for being scared of "the guy on the oatmeal" box and I must say that I've always agreed with him. Quakers happen to be a little scary. I blame their hats, it reminds me of some creepy Children of the Corn thing. I've also kind of always felt that The Quaker Oats guy looks exactly like the kind of man that would turn into a demonic sorcerer, just like Vigo the Carpathian. What, nobody else gets that feeling? Luckily for Quaker Oats they do make good oatmeal so their poor decision to make this man the mascot didn't hurt anyone. Although it isn't very hard to make good oatmeal, all you have to do is NOT be Cream of Wheat. 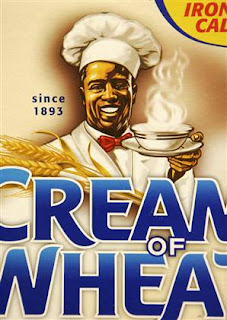 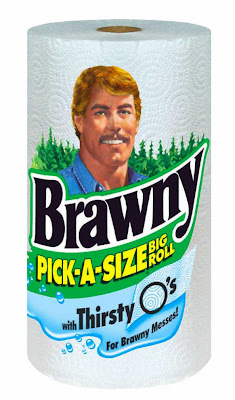 Have I ever mentioned how I've always had a fear of men with mustaches? Well I do. I also hate the Brawny man's hair and its strange color...yeah he just creeps me out for unexplained reasons. I should also point out that the guy who used to run the Stop & Shop in my hometown looked just like him. That made things difficult. Also, as of today they have updated the Brawny man to make him more "modern" but I know they really did it because people were complaining about his creep factor. How do you think he looks now? 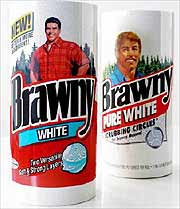 Hmmm maybe the mustache is important. He does look less Brawny without it. Damn it. 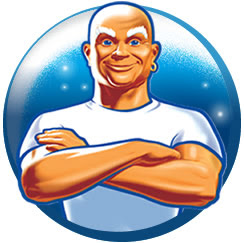 I don't have a problem with bald men in the slightest. John Locke for instance is the epitome of an awesome bald man so don't worry. The problem I do have with Mr. Clean however is that his eyebrows are white and bushy. Why can't they make him look normal? Are they white because he's so clean? And what's with the earring? I don't know about this Mr. Clean character...he seems like he has a shady past. Maybe he was in prison at one point. Probably for cleaning people's houses without asking first or maybe you know...drugs. Clearly he's not as clean as we thought. 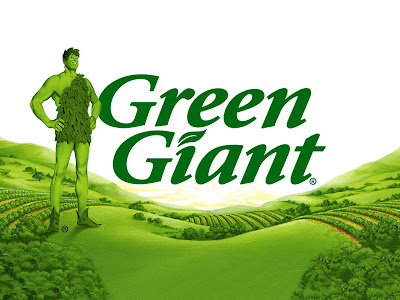 Why would I want to buy green beans from someone like him? Believe me I've been struggling with this question for most of my life. I guess I just don't like the idea of a "giant" especially one that pretends to be a tree. Also, is he naturally green, or did he paint himself one day? Did he descend from a bean? What IS his story exactly? Whatever it is, I don't trust him. Not one bit. He should also look into getting a longer dress. We don't need vulgarities on our frozen vegetables. 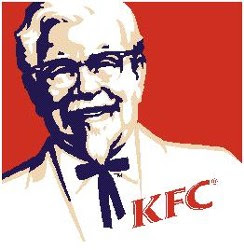 This kind of goes back to the Quaker Oats thing. Why does he have to wear that long tie thing? And the glasses, the white hair AND mustache? It's almost too much. The worst of it is, that Colonel Sanders was a real person! No one is safe in this world if people like him are making fried chicken and delicious biscuits. Note: I'll be the first to admit that I love KFC--I do and I don't care what you say. How do they get it so moist? I bet it has nothing to do with Colonel Sanders and his skinny long black tie. 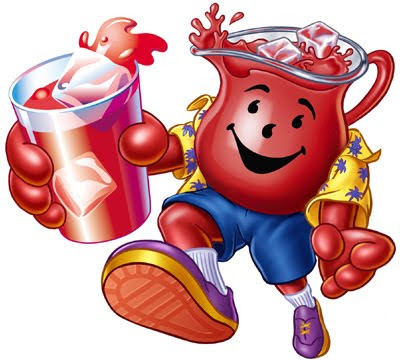 As much as I hate Dane Cook, he has a point. Just who does the Kool-Aid man think he is? Also, why are kids so excited to see him? The "man" is terrifying. A talking pitcher of punch is nothing to get excited about. Plain and simple, the Kool-Aid man is a bully. What if I don't get excited and I don't drink his Kool-Aid? He would obviously punch a hole through me. Also, Kool-Aid is gross. 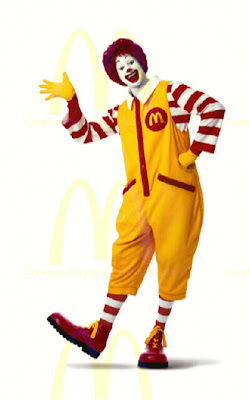 These next two should come as no surprise. I've said this before but whose bright idea was it to make a clown the mascot for delicious fast food? Ronald McDonald is an asshole, plain and simple. Worst. Mascot. Ever. 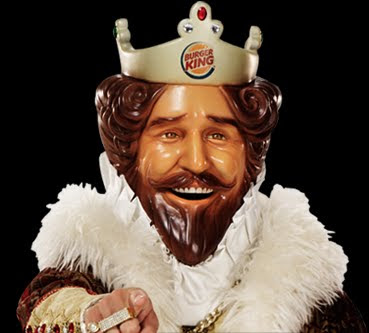 Apparently, Burger King borrowed a few tricks from McDonalds. Creepy sells I guess. Naturally, the Burger King was made creepy on purpose so he kind of loses points for being obvious. Still though, nothing is scarier than seeing someone dressed like the Burger King. It makes me want to jump into the nearest dumpster full of pencil shavings and hide until he's gone. 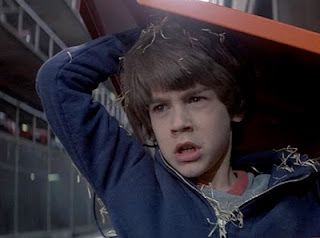 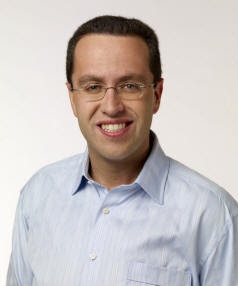 Jared sucks. Let me tell you a story about Jared. Once upon a time Jared was fat. Then Jared lost weight by eating Subway sandwiches. Does this make sense? Not really. Who eats a sandwich everyday and loses weight? Biggest crock of lies I've ever heard. Unfortunately for Jared losing weight will never rid him of that creepy looking face. By the way, I'm starting my KFC diet tomorrow. Can't wait to see the results!
Posted by Andre Dumas at 9:58 AM

I remember thinking that the Poltergeist 2 bad guy looked like the Quaker Oats Quaker when I first saw that movie.

I agree about Jared. He probably had some fatty surgery and got paid by Subway to lie to everyone.

If you really hate Col. Sanders, you should check out the movie DARKTOWN STRUTTERS. The main villain is a parody of Sanders (who has the same look but a different name). He owns a bunch of BBQ rib restaurants, and he comes up with a evil plan to run for political office. He develops a negro machine to make black people (!), and then offers free watermelon if you buy a bucket of ribs. With all of these new black people eating at his restaurants, they'll all vote for the fake Col. Sanders on account of receiving free watermelon (!) While a black chick motorcycle gang is trying to foil his plan, fake Sanders is defended by his cronies, a KKK motorcycle gang. So, I guess he's also a KKK member (the details might be slightly off). I swear to Christ I'm not making this up. It's probably the best "F You" to a fast food mascot ever, at least until they make the Ronald McDonald child molester movie (made for Lifetime, of course).

I work at a grocery store and there's a guy that comes in every once in a while who looks and dresses just like Colonel Sanders. Hair, tie, suit, glasses, everything. Funny and quite weird at the same time.

Mr. Clean has an odd, ape-like quality to his face, like someone doused Dr. Zaeus with a bottle of cheap hair remover.

When I was a kid I convinced myself I saw Ronald walking around a closed McDonald's one night. Doing what, I don't knwow. Also, I used to have nightmares about him snatching kids.

I'm late on responding to these but wow you have all made me substantially more creeped out. SO let me get this straight. There are tons of REAL people who look like these scary people, plus movies and a REAL RONALD MCDONALD WAS SEEN LURKING OUTSIDE OF A MCDONALDS?!! I can't even comprehend the kind of horror I would feel if I saw that. I also can't comprehend that they once had an actual guy dress up at selected McDonald's. My hometown establishment was never unlucky enough.

Also a friend of mine told me that Mr. Clean has an earring because he's a genie. I sort of remember something along those lines, but the idea of him being an ex convict drug dealer is way better.

I don't know if they still do this, but they did used to have guys dress up as Ronald and entertain kids at McDonald's "restaurants" (they would advertise it and tell you to "bring the kids"). I remember going to one of these and hanging out with a fake Ronald (this was in the 80's sometime), and he would make animal balloons and do whatever else clown child molesters do to gain the trust of children. I did get some shitty animal balloon and escaped with my life. Other children weren't so lucky I'm sure, and probably ended up in the back of some mystery van that was "filled with candy", as the saying goes.

I don't think I've laughed this hard in a while...good work!

Matango...exactly what I've always thought. When I was a kid the Poltergeist guy and Quaker Oats guy were one in the same and equally as evil.