Cabin Fever: It's Official, Going to a Cabin in the Woods is Never a Good Idea. 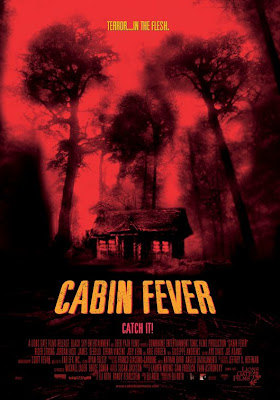 As I said before the Evil Dead was really the first case of "cabin fever" and now Eli Roth has served up another dose with a movie actually called Cabin Fever...tricky little devil. Some rebellious kids take a little vacation in the woods only to each succumb to a deadly flesh eating virus. No one really has a chance because the disease is spreading through contaminated water and everyone loves water, except the douche bag who vowed only to drink beer- turns out that was a good plan.

The disease sneaks up on the main characters by first making it's appearance on the face of a wandering man who the douche bag encounters in the wood. The guy coughs up blood all over the place and they accidentally set fire to him. The man falls into the water source dying, spreading his filth and the disease too into the water. Rider Strong's little girlfriend gets it first when he tries to seduce her the next morning. Blue balls occur in the worst possible manner, as he finds the flesh on her inner leg have begun to deteriorate or maybe she just got her period who knows.

Everyone's favorite scene seems to be the leg shaving scene which is sort of funny because seriously who cares that your legs are hairy when there is a flesh eating disease going around? AND what is also funny is that she keeps on shaving through the scabs and flesh eating and the razor makes the most terrible noise.....yikes it is pretty rough to watch.

I also enjoyed when Rider Strong killed his girlfriend with the shovel. It evokes the same pain that Ash felt when he had to dismember his woman with a chainsaw...of course Ash wasn't man enough but whatever. It's all the same kind of helplessness and hopelessness that makes the fear in these kinds of movies believable. Especially now with Swine Flu going around- we can really see that disease makes people go nuts. The movie isn't terrible and there are some great scenes but for the most part is sort of falls flat. I'm not entirely sure why but I think it takes too long for some of the characters to die- and maybe because there are some poor usages of racial slurs. It's entertaining but can sometimes cause me to shout, "get to the point!". Perhaps Eli Roth was testing the waters with this one before setting off into the worldwide web of Hostel and serious gross outs. Perhaps perhaps.

This movie is really amazing! The people in this film are really don't have ideas about their enemy.

I actually found this really disappointing. It isn't all that gross and what there was has been done before and much, bloodier, graphically, and grossly!
The disapointing aspect for me is that they went to Peter Jackson who screamed he loved it. This is just so much endorsing it isn't funny.
If it was a truely gross and original film then word of mouth would have got bums on seats and not Jackson's so called opinions.