The Fly: I Want Fly Mittens For Christmas. 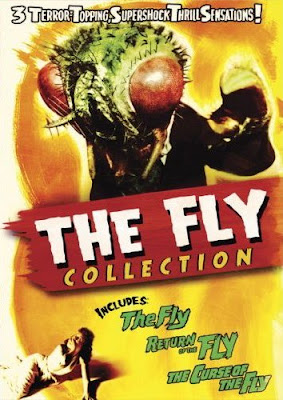 So bravo actually has the remake of the fly at number 33 and not the original which wasn't exactly the best news to find out after having watched the original...but it's OK because original and classic movies are fabulous. I remember seeing this when I was little except it was in black and white so the spider part wasn't scary. Isn't it weird that when things are in color it's somehow scarier? That spider was massive in color and I don't agree with massive spiders. Plus Vincent Price is in it and the blood looks like Suspiria blood so I was excited. Oh and the fly-man has the same name as me so that was exciting too.

Andre the scientist develops a new and incredible invention. A teleportation device! In the beginning he starts small... ash trays, newspapers boring things. And then one lovely night when he starts getting cocky the family cat strolls in for a nice saucer of milk. If you are thinking "don't do it you a-hole" so was I. Seriously?! The beloved family cat is your test subject???! How about you go outside and catch a fucking mouse or something that doesn't have sentimental value. Heck, I'd even volunteer Phillippe before I volunteered the cat. Bah.

So anyways the saucer makes it to the other teleport pad but the cat's atoms get lost somewhere in the air and we never see it again. This could be sadder than the puppy incident in Single White Female.....OK so Andre finally gets it right then breaks out a guinea pig to test it (now he finds a guinea pig!) and all goes well. One day he decides to transport himself. The first time all goes well. The second eh things could have gone better. A fly joins him in the box without Andre realizing it. In the switch their atoms got mixed up and Andre came out with a giant fly head and a fly hand (mitten). He enlists his wife to find the fly with the white head and if she is unsuccessful she must kill her husband.

This movie is pretty classic. First off the wife's scream is awesome because she actually puts her hands over her cheeks while screaming...you know what I'm talking about, the classic scream face? It's pretty refreshing to see it again. Also there are some quirky moments and Phillippe wears this awesome hat at the end. Oh Phillippe is Andre's son.

Then there is the ending. How depressing. Andre ended up dying in two equally terrible ways. Although I will say it wouldn't have done much good to save him from the spider web because his human self was already killed so ehhh in the long run it was probably better the dectective finished him off with a rock. That fly-man's scream at the end though...powerful stuff. Piercing and really really chilling. The whole story is so tragic but I'm glad the wife gets off free and is able to play croquet at the end. Thank god life can go back to being normal again...now if they only had that damn cat back.

Here is what a fly mitten looks like if you want to start your christmas shopping early. 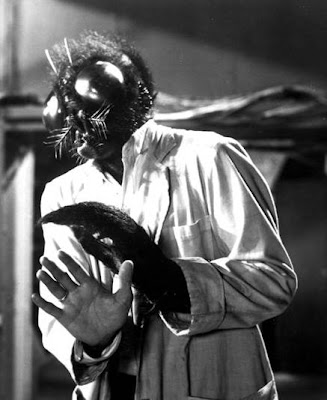 They need to sell the fly head and hands("mittens") at a halloween store. I would so buy them and wear them. :)

Saving little fly-Andre from the spider would have been no good also because the spiderweb poisons the escaped victim.

It was painful seeing how slowly the two guys reacted to put the fly out of its misery.