When a Stranger Calls: She Didn't Even Get To Finish Her Homework! 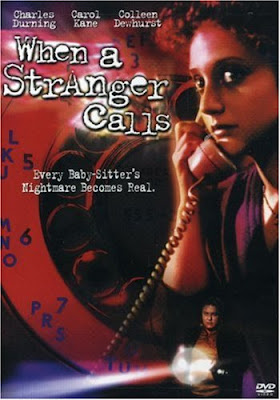 When a Stranger Calls was not what I expected it to be at all. The first half hour or so is a perfect example of a great horror movie scene that keeps you on your feet. What happens after is just one long snooze till you hear the trademark music of Jill's paranoia and bad memories spark up again. Even Carol Kane- the best part of the movie, mostly because of her ability to be naturally creepy looking and sounding- is entirely absent from the whole middle of the film. Perhaps there is much too much concentration on the killer- but I much rather enjoyed when he was just a floating cloud of mystery and just a voice attached to a phone.

Maybe I'm depending too much on my Black Christmas morals but I like to keep my knowledge of crazy killers to a minimum. The one exception being of course Norman Bates who is entirely fascinating. Billy in Black Christmas was also immensely disturbed and psychotic but we didn't gain any knowledge about him- and that's what makes him scary.Crazy people are just scary because they are crazy period. I don't want to know why they are crazy, being crazy is scary enough. In When a Stranger Calls, the scares come when you are dealt the unknown whereabouts of a strange man calling you on the phone. Jill believes he is outside watching her- when he is in fact inside the house. I was so surprised to learn that that whole scene happens immediately in the film that I was completely flabbergasted when it suddenly said 7 years later and some other strange woman appeared on the screen.

So I will talk about that amazing scene then- that is so amazingly perfect I wonder if the movie could have just consisted of that and that would be that. Of course now that I think about it, that is exactly what the remake attempted to do and it just made the movie boring- so I guess it's a lose lose.

The beginning scene is so terrifying because there is so much tension built up almost immediately. As someone who once babysat- the time alone when the children were sleeping was always a bit scary. Something about being alone in a house at night with windows has never been my strong point. Case in point when my friend and I called 911 because it sounded like someone was moving boxes in the attic. Turns out it was the 4th of July fireworks- which I still think DO sound like someone moving boxes around but whatever cops whatever.

The killers voice on the phone is so calm and so creepy it has this unpleasantness that is so scary I can't even properly describe it. His relentlessness is what makes him scary. And the mere fact that he actually kills the children- What a shock! I really did not see that coming at all. The creepiest part hands down was when the cops carried the children down in body bags., clutching them like dead koala bears. And when the killer has a quick flashback of the scene and him covered in blood looking down at the bloody beds!

The ending sequence that does return us to the fabulously creepy Carol Kane- doesn't really redeem the terrible boredom of the middle part of the movie. When she hears his voice and thinks he's in the closet and then BAM he's actually in the bed next to her? Really? Come on people what ever happened to locked doors- and not noticing someone killed someone else stuffed them in a closet and then slid into bed with you? Kind of like how it seems weird that with the house being so quiet in the beginning that Jill wouldn't have heard anybody completely slaughtering two children upstairs.

So all in all, a pretty big disappointment here and I'm really sad about it because the beginning was so wonderful. Ah well I suppose Bravo is right in pointing out scariest movie moments and not movies, because this is certainly an example.