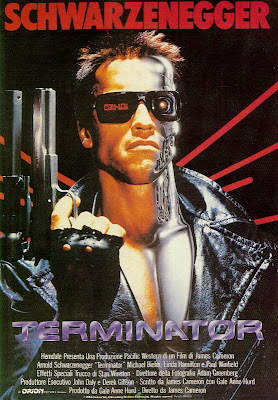 So forgive me but I have never actually seen the original Terminator. And since Bravo is fond of putting movies that aren't horror movies on their list of scariest movie moments I have to write a little spiel about it. A half hour into the movie and I can agree that yes perhaps the flashbacks of what the world will look like in 2000-whatever the date is are upsetting, the human skulls being crushed by machines is very sad. I myself have always disliked what the supposed future is suppose to look like- the only one I really felt comfortable with was Back to the Future part dos. Hover boards?! 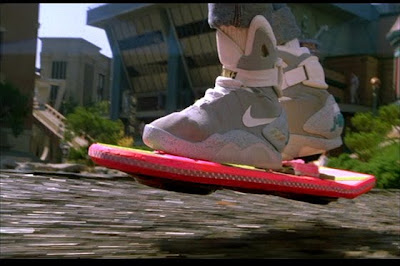 Count me in. Sadly we are approaching that date and I don't see any hover boards or flying cars so whomp whomp.

While this is a horror blog, I can't help but talk about things that stick out to me the most in The Terminator so far.

1. Bill Paxton is the lead punk. 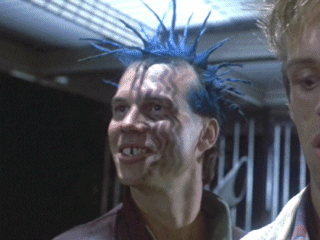 That is amazing. Way to go Bill. I also enjoy films portrayal of punks. I guess that's punkish....I don't know about that gap in the tooth or that...what is that a tire skid mark tattoo on his face? Hardcore man.

2. Does anyone notice how well the punks clothing fits Arnold? He must have done some quick tailoring on that jacket because that guy was pretty tiny. I mean I guess I wouldn't be surprised if a killing machine had a little pocket sewing kit but I mean come on- let's get serious here.

3. Why are bums in movies always so fricking gross. They make me more nauseous than seeing Arnold's junk flapping around at a distance. Why is it always so trashy and dirty everywhere? 1984 couldn't have been that bad, I have proof. But seriously bums clean it up.

4. Why can't the garbage man in the beginning cut his nails? He's not a bum- so he isn't excused. Also I don't blame him for abdanoning his garbage truck after seeing a naked Arnold rise from the blue lightning streaks. Yikes. 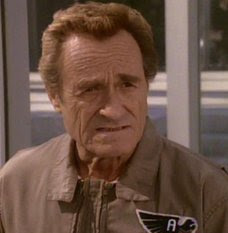 Ok that's all I got for now. Sorry Terminator fans- I know it's a legend but I'm just not in a Terminator mood.

haha this Wayne's World spoof is in spanish!

Funding a war against the robotic horde isn't cheap. You could always consider taking out payday loans to help the human resistance.
Posted by Andre Dumas at 1:34 PM