I Know What You Did Last Summer: And I Don't Really Care. 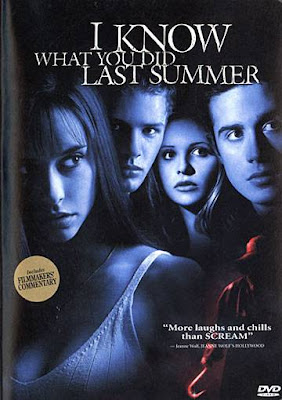 For some reason I've never really enjoyed this film that many relate so easily to Scream. Personally I think it's worlds different and Jennifer Love Hewitt is about 30 times more annoying than Neve Campbell. Her boobs may be the most distracting thing I've ever seen and her bangs only make me hate her more. I don't think it's anywhere near as iconic as Scream in terms of 90's slasher movies but it does have some OK scares.

4 friends accidentally hit a man after some fun partying on a beach. A year goes by, the kids set off to college and they start getting strange letters that say "I know what you did last summer". The friends return to their hometown where they come face to face with the person who knows their dark and obnoxious past.

I think what always puts me off from this movie is that I can never remember or understand who the killer is or why he decides to do it, and who Billy Blue or whatever is. I know it's probably easy to figure it out but it always takes me another watching or reading of the summary to remember. The killer just doesn't appeal to me in this. He's just a tall fisherman with a hook ripped off from the Candyman. I appreciate that he likes to wear a nice hat- but for the most part he's kind of a snooze. The only part where his stature scared me was in the boutique and he suddenly comes out from one of the plastic mannequin thingys.

As for scariness there are only a few that made me semi- scared. The first being when the killer enters Sarah Michelle Gellar's house and spends the night in her closet only to cut her hair. And then when Ryan Phillipe goes down to retrieve Sarah's crown and the "dead" guy opens his eyes. Other than that it was kind of a snooze for me. Especially the last scene. I mean jump off the boat already. And that they would even suggest Freddy Prinze Junior could be the killer is just insulting. Boyfriends being the killer? Never heard that one before.

The movie is just so drab and blah. It's a boring fishing town with no token weirdos and I really can't see why any of the characters would even want to return after college. The killer is a lame ass who annoys me and sometimes I just wish he would shut up about knowing what they did and just fucking tell someone already. If you really want to punish some obnoxious teenagers send them to prison so they can be some burly man's boyfriend. Nothing says punishment like butt sex.
Buy I Know What You Did Last Summer at Horror Movie Empire!