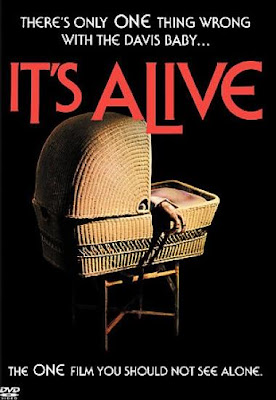 It seems as though I'm really on a killer baby/baby movie kick. I only moved this up on my queue because a website linked my blog to a post about It's Alive! And I hadn't even written a post about it yet! Instead the link brought their readers to my post about the Candyman....oh well special surprise I guess. I'm kind of sad I did move it up because in all honesty it was a bit of a snoozer, with only a few things I liked.

The plot is simple. A couple has a baby that turns out to be a mutant massive head baby with big fangs and claws. He had barely just made it out of the vagina when he starts biting every doctor in the room. The husband runs into the delivery room to find all the doctors and nurses dead and his wife screaming WHAT DOES MY BABY LOOK LIKE. I guess that scene is pretty decent although I expected more of a look into the event actually happening. So anyways the baby runs lose and just starts eating random people at will. Police decide they need to kill the baby and they go on a baby hunt.

So the scenes I did enjoy was the milkman scene. Mostly because I loved how he went in for like 3 or 4 bottles before the mutant baby actually grabbed him, so it was a bit suspenseful in that sense, but I really LOVED how the blood mixed with the milk. Bloody milk? Sick. Bloody milk because of a mutant baby attack...pretty awesome. Although side note: there was a rumor in high school that the chocolate milk was only chocolate because the milk was bloody and they had to cover up the color...ah memories.

I also liked how we only saw what the baby looked like little by little. It was like it started with just seeing a tooth, then we got more and more it was a pretty effective little trick kind of like Jaws but not nearly as terrifying. I also appreciated the emotion from the father at the end. Faced with the option of shooting his mutant baby or not and he just couldn't handle it. I do feel that this movie is mostly pro-life.....or is it pro choice... not sure I guess there is evidence for both but in this instance- what it reminded me of was how people back out of abortions because they suddenly get attached or people that put their children up for adoption can't go through with it if they hold it or form some sort of bond. Despite the connotations I really felt for the guy and his well timed tears.

I didn't like how the pace was so freaking slow...it reminded me of When a Stranger Calls in that I was like come onnn get to the good stuff already. I also wasn't a big fan of the baby's point of view. It was too blurry and made me nauseous. Perhaps they could have kept that POV in but not have made it blurry? I mean it's like presumptuous of them...just because he's a mutant baby he can't see properly? Jerks. Also why when the woman realized she was in labor did the husband take his sweet time? Speed it up Daddy there is no time to be waking your son up with the cat and having heart to heart chats!

Overall much too slow- not exciting enough or creative enough deaths. No real suspense was created and I never felt scared. While the beginning scene is unsettling it's not unsettling enough to really wow me. But I suppose it did open the door to the possibility of the killer being a poor harmless child.

Poor mutant baby he only wanted to be with his family : (
Also was the ending scene filmed in the same place as the big car race in Grease?! Neato guys! 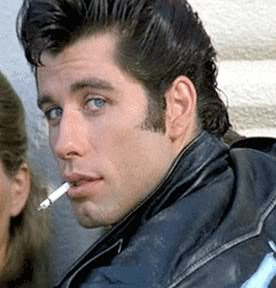