Quarantine: Zombies With Rabies...? Still Not As Devastating as Zombie Sharks. 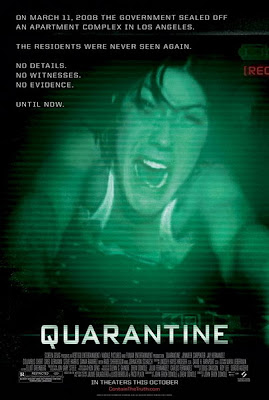 Quarantine is a remake of the foreign film REC although from what I gather, it's just the same exact movie except in english. Jennifer Carpenter will forever be ingrained in my mind as the psycho and possessed Emily Rose- so I have a hard time seeing her in a movie and not be afraid of her demon possessed face... All demon faces aside she isn't very good in this movie. She's a terrible news reporter and kind of awkward whilst interacting with handsome firefighters. Her extreme terror is kind of over the top and too annoyingly hysterical-although I suppose I would also be hysterical if people with rabies were attacking me too, but it would be nice to sometimes have her be relaxed.

So the story is-Jennifer Carpenter and her camera man are shadowing firefighters for a whole night. When they get a call they head to an apartment complex where an elderly woman was reported to be screaming or something. When they get inside the old woman is foaming at the mouth and has blood down her dress. Obviously a bad sign- but they continue to be like "are you okay ma'am?" No she's obviously not okay. So she attacks people and blah blah people start dropping like flies. Then they soon find out they are being quarantined in the apartment building and they don't know why. Hmmm wild guess...maybe it's the weird foaming mouth disease where old people bite off people's faces? No? Just a guess.

So little by little they find the disease spread because one apartment had a dog and the dog got infected and the guy brought it to the vet- but I guess the old woman got bit by the dog or maybe an escaped diseased rat from the attic bit the old lady who knows.

The movie for me was mostly a snooze fest. I spent more time looking at facebook then actually watching the movie. It has the whole documentary style going like Cloverfield but there's zombie people and the camera man just won't put the camera down no matter what...it's a little silly. The only parts I really liked were when the camera man beat a woman to death with the camera- so we were kind of like being used as the murder weapon very cool very cool. And the skinny underwear zombie in the attic who I assume was the scientist was very scary looking. And I guess the very last shot which was horribly spoiled by the trailer.

I think maybe the best indicator of a good horror movie is whether or not all the big scares are shown to you in the trailer, and as it so happens that is the case with this one. I was so bored and tired of zombies with rabies jumping out at the camera. That scare is good one time but it happens consistently. And the part where the little girl bites her mom while holding her? Who didn't see that coming? I'll have to catch REC and see if they changed anything with this version but I'm guessing no- but also foreign movies are almost always better so I'm not completely giving up hope. All in all not the greatest, even with Jimmy from That Thing You Do being in it.
Buy Quarantine at Horror Movie Empire!

Unbelievably the creature in [REC] is skinnier than the Quarantine version. Taller, too, if memory serves me correctly. Kind of like Aage Krger/Mary's little brother in season 2 of The Kingdom.

While these films are similar, [REC] is, for me, a better film for several subtle reasons most involving the end sequence where the creature is unveiled.

REC is teh awesomes. I wasn't bored at all even with Quarantine spoilers. I think REC handles the mood better. Quarantine must be like a bad photocopy.

I had a lot of problems with this movie all steaming from over analyzing everything. My biggest problem was the fact that everything was chalked up to an accelerated strain of rabies. Now if it was an accelerated rabies virus, wouldn't death also be accelerated? So how on earth was the man in the attic still alive? I guess I should have turned my brain off, silly me.