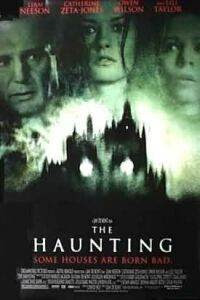 I think I may be the only person in the world who likes this movie. I've kept it a secret for so long ah well THE CAT'S OUTTA THE BAG! Perhaps I have a soft spot for bad acting or maybe its my eternal love for a former Jedi knight.... who knows. Whatever it is, certain unforgettable images from this movie kept popping into my head today and I just couldn't ignore them.

I've never seen the original but I will eventually because it's on my list and I'm sure it's worlds better but this particular movie has always stuck with me. Qui-Gon Jin is falsely holding an experiment to test the affects of a big and scary house on insomniacs. What the tricky bastard is really doing however is studying some kind of paranormal activity and psychosis or whatever but who knows really. So it's not long before strange things keep happening- especially things that revolve around the lead character Nell.

The part that has always always stuck out to me is when Nell is running through the house away from numerous terrible CGI effects and finds herself looking into a mirror. Here her face tenses up suddenly and she smiles to reveal a set of teeth that are not hers. I can't really tell you what makes this so scary- I think it's something about how the teeth look so strange in her mouth and they do this creepy smile I don't know it just really freaks me out. And then she runs over to another mirror where her eyes are different! Equally scary but I think the teeth may still have an edge.

The other part that scared me- (although I think this is in part due to my innate fear of seeing a hanging person) is when they are in the garden and Nell looks up and sees a woman hanging from the ceiling....

Then there's also the little things like Liam Neeson being dragged into the fountain by a bad CGI hand and the fountain starts to spew blood. The bloody footprints of the children leading to the secret room. The log book of all the children and their ages when they died. How that one locked door smells like something foul, and the knocking that reminds Nell of her dying mother's cane banging on the wall.

There are terrible aspects too of course. Owen Wilson getting his head slashed off by a giant stone lion. The CGI ghost children, Nell's bad acting, Catherine Zeta Jones talking about how she's bi-sexual, Owen Wilson flirting with Catherine Zeta- I'm- A- Ho- Jones's character hmmm I guess it is a bad movie...but I still have a soft spot for it!

Perhaps it's all the details of the house- that one strange hallway with the stone books floating in water, the tall ceilings, monstrous fire place, and the decor of all the rooms. It almost makes the mansion the villain or the main character kind of like the hotel in The Shining.

Sure there may not be a whole lot of good but that teeth scene will always get me! If you fast forward to around 8:00 on the clip below I think you can see what I'm talking about.
Buy The Haunting at Horror Movie Empire!

I hope you get to see the original soon. I've heard many people say it isn't scary, but I don't think they have really watched it because I still don't like viewing it at night when the house is empty. There is just something about the camera work, the sounds and the reactions of the characters that really gets to me.

Oooh I know I can't wait to see it. I think I will move it up on my Netflix now that you mention it. I think I will have a similiar reaction to yours as I found The Innocents to be one of the most terrifying and creepy movies I've ever seen...based on it's camera work and overall atmosphere!