Jaws: Great White Sharks Were Spotted Two Towns Over From Mine...Eff That. 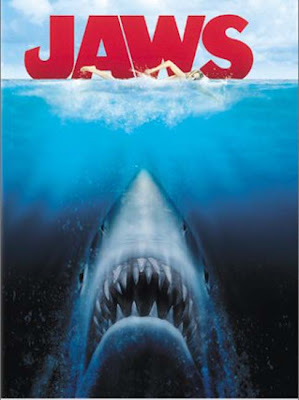 Ok so let me start off by saying I can't watch this movie unless I have a pillow and some valium. Sharks have been my #1 fear since the first time I saw this movie. Most people don't think of Jaws as a scary movie and to them I say are you fucking nuts?! So what if the shark looks fake. It's fucking scary. Bravo agrees even though I don't usually agree with their countdown but personally I would rate this as the number one scary moment. And that moment is of course the beginning scene. Jaws has taught me many things throughout my life, for instance; don't let play fetch with your dog in the ocean. Also don't throw chum overboard without looking in front of you first and never under any circumstances should you go skinny dippy alone at night after your hook up has passed out on the beach.

The beginning scene is like watching someone get buried alive. Who would ever want to get eaten by a shark? No one. The way that the girl reacts after her leg is first bitten is so real and so stunning. She gasps like the water is too cold and when she realizes that her leg has been bitten off it's all downhill from there. Drowning and being bitten by a shark is not cool man, not cool. You can't help but put yourself in that situation. It could very well be the most terrifying thing that could ever happen to.

The rest of the movie is equally terrifying because of the music and because you go so long without seeing the shark and then when you do see it it's like oops I crapped my pants that was a fucking shark. The chum scene in particular... so not cool. Then the scene where the kid on the yellow raft gets eaten and that geyser of blood shoots up. I mean it really was a blessing in disguise that the shark broke down in the salt water and they couldn't use it because the suspense of not seeing the shark until critical moments is really key to making this movie work. The shark eye view and the haunting score also are vital points that make this movie timeless and a truly fantastic scare. For as long as I live I will never not have a heart attack when I see a great white shark appear on TV out of nowhere which actually happens a lot more than you would think. Sharks are my number one scare. Number two is usually spiders but after seeing Deliverance I'll have to think that one over again.
Buy Jaws at Horror Movie Empire

Jaws is one of my all time favorite films. I just think it is so perfect. What I call the "Quint speech" where he tells the story of the Indianapolis is literally one of my, if not all time, favorite scenes. Everything about it is so perfect. Even the way the music creeps in during it. Shaw's telling of it is so right on the nose. Also it's a prime example of how you can create what on the surface seems like a cliched character but with one scene that character takes on such depth and you learn why he is the way he is. Absolutely stunning.