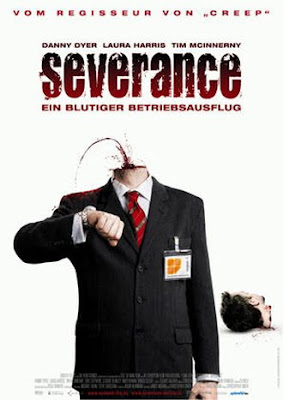 Like most girls I enjoy a well seasoned British movie. Unlike most girls, I also enjoy a well seasoned and bloody british horror comedy. Severance does not disappoint. It follows a team of weapon sales people on a team building trip in Eastern Europe. As I've said before in my Hostel post- Eastern Europe is a very scary place and if I were told to go there for a "team building" exercise I would say no thank you goodbye. The team starts dropping like flies as they try to understand who is killing them and why.

First things first the comedy in this movie is really refreshing. There aren't funny moments that are funny because they weren't intended for humor like a lot of horror movies. The comedy is intelligent and really really frickin funny. Some of my favorites were when Maggie and Steve are smoking and the bear trap guy gets dragged away behind them. The part where Steve is sitting by the tree and sees the prostitutes log contraption flying out of the hole, and of course the prostitute shooting the hell out of that guy at the end. There are endless funny moments and lines and it really makes the film awesome.

Now to the horror side- there aren't a whole lot of scares- but there is quite a bit of gore and surprising modes of killing. The very first death for instance was almost my definition of a perfect killing. Where you know what is happening but you aren't given a close up view. The blood from the wound dripping over that guys head is enough to get the idea across, and the way that the blood kind of drowned him was really nice. I also though the carving of the logo into that guys skin was great and of course the bear trap scene. Yikes I've never been so entertained and grossed out at the same time- oh! and the shoving the leg in the fridge bit- genius! There are a lot of homages to other classic movies in this- and one thing I kept noticing that I particularly loved was that the music sounded a lot like the spooky music from The Shining.

The story and motives of the killers isn't entirely necessary here and it's more about the survival of our main characters. You get the general idea of who the killers but it isn't crucial to making the movie good. I love seeing a female lead who kicks some butt- and at the same time I love seeing our old friend the queen alien from The Faculty!

So all in all a great, awesome, amazing movie. Full of comedy and a lot of fun gore. Thumbs up in my book all the way.

Yes! I don't see very many people blog about Severence, which is a shame because it is so good. And, unlike a lot of horror movies made today, it keeps getting better every time you watch it because you hear something you didn't hear or see the time before (from either wincing or laughing).

My favorite funny moment is toward the end when Maggie is on hold--whew! I almost laughed myself silly. She played that scene perfectly! I will say this film definitely entertained me more than scared me but I think it'll be the odd man who doesn't enjoy it.