The Kiss: Now That Is One Cat I WOULD Kill. 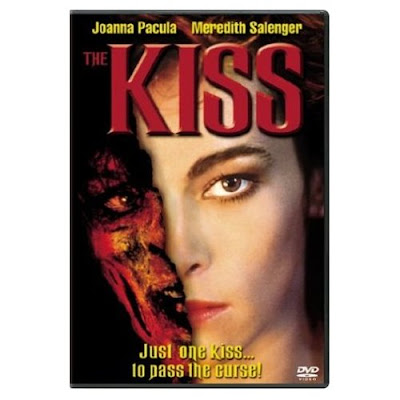 The reason I have watched this movie tonight is very simple. I had a sudden terrifying memory as a child of watching a scene from this movie. Finding the movie was easy- google in exactly what you are looking for-which in this case was "girl's necklace gets caught in escalator and slices her up" and out came The Kiss.

The Kiss's plot is a bit confusing- at least it was to me who is used to order and plots that don't involve the sudden introduction of a possessed demon cat. We begin with two little girls saying their goodbyes to each other on a train leaving for the Congo. While in the train the darker haired sister talks with her Aunt- who has brought along a strange family heirloom. It looked kind of like a hairless ostrich with no eyeballs. We soon notice the Aunt has a strange skin problem easily confused with your basic psoriasis- and then soon turns into a weird demon zombie corpse thing and "kisses" the little girl. When the train comes into the station the conductor finds their cabin bloodied and a rotted corpse in the Aunt's seat. The little girl is seen getting off the train with a devilish sort of look in her eye.

So what can we surmise from this? The demon whatever it is thingy must "kiss" a youth every some odd years or it will die for good. It reincarnates itself in the younger body and proceeds on with it's life. Think The Skeleton Key if you will. So next we find that the other sister not boarding the train in the beginning has lived a happy life and given birth to a lovely daughter. The mother receives a strange phone call from her sister who mutters something about it "being time" - one guess as to what that means- and she hurries off to the local gun store to see about a nice gun. Before she can pick out her weapon a car hits her and she dies. The woman's daughter Amy soon finds out she has an Aunt she never knew about- who turns out to be more than she can handle.

So when I say the plot is a bit dodgy I mean this... the aforementioned scene that drew me to this movie is very confusing. It's still was as traumatizing as I remember and I wouldn't be surprised if this scene created that whole fear of getting ripped up in the escaltor thing. The problem is- the friend who this happens to does not die or get completely slashed up. Well maybe she does- but we don't see it! We see some serious flesh and the remains of the necklace and maybe a tooth or two. But the next thing we learn is she got hurt at the mall and is in the hospital. No after shot- no explanation for how she could ever survive that ordeal... and she's never seen or heard from agagin! ! I was very shocked. It's almost like they fired that actress unexpectedly and just completely forgot that they had to explain her absence.

The other strange thing is the no warning introduction of the demon cat. This cat pops out of nowhere and apparently is the Aunt's animagus/pet/alter ego. It has gross teeth and spits curdled milk vomit at people. It also does a really shitty job of actually killing anyone. It's last hurrah comes in the form of being electrocuted by a bug zapper and then set on fire and exploded. Pretty frickin lame.

I guess my main gripe is that nothing is really explain. A little back story about this "family" tradition or curse- like how it started for example or why would be extremely helpful in clearing up some obvious plot holes. The writing was pretty hilarious- my favorite being "I NEED SOME FRITOS I WANT TO DRINK A FUCKING DIET COKE" hahah classic stuff. Unfortunately I don't think the lines were meant to have much comedy alas the mark of a sub par horror movie.

All in all a real throwback to my days of being frightened of the TV and the horrors it would spit back at me. That escalator scene still makes me cringe a bit but other than that nothing great to report. At most it felt like a made for TV horror movie or maybe an Are You Afraid of the Dark episode.

Meredith Salenger is hot (don't get me started on Dream a Little Dream), but this movie didn't quite gel for me. It felt like there were scenes missing or something. Reading this review reminded me of an odd coincidence where I watched this movie and The Dreamers (2003) as a double feature. Incredibly, both feature the same clip from Blonde Venus, where Marlene Dietrich is doing the strip tease wearing a monkey suit. I watched The Kiss second, and when that scene played on a TV in a kitchen, I believe, I thought I was going insane. Talk about random.