Mother's Day: That's Funny...My Grandma Has a Gigantic Pair of Inflatable Boobs Hanging Around the House Too... 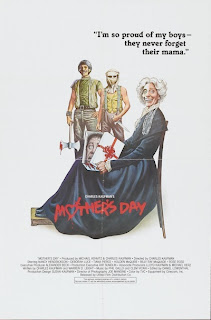 Ah yes the joys of a cult horror film. No one really expects them to be brilliant yet they do exude a certain entertainment that is hard to find anywhere else...so perhaps they may be brilliant after all. Mother's Day like any other cult horror film is filled to the brim with absurdity and blood those who enjoy such matters I think would rather enjoy this film.

Mother's Day tells the tale of 3 college friends 10 years after graduation. They have made a pact to get together and spend one weekend out of the year together. Abbey is a bookish sort with the biggest and thickest glasses I've ever seen *insert "that's what she said joke here* Jackie has low self esteem and often gets walked on by men, and Trina is tall, blonde and annoying.

The girls set off on their surprise weekend getaway, this year Jackie gets to pick the spot and of course chooses the only place where there is a psychotic old lady who likes to watch her sons rape women- but I'm getting ahead of myself. The girls camp out leave a trail of empty beer cans so they can find their way back and get to skinny dipping almost immediately.

On their last night they are abducted by 2 crazies. One big guy with a bad set of fake hill billy teeth, and one shrimpier guy who likes to wear tight blue pants. They tie the girls up in sleeping bags and drag them to their house where Mother awaits. They tie up the girls to weight lifting equipment and take Jackie outside. Here they act out scenes to mother's liking then rape her and beat her up etc etc. Trina and Abbey end up escaping with Jackie on their back, but when Jackie dies from injuries sustained from raping, they decide to seek their revenge.

The movie does provide some high quality entertainment in the form of gore and just plain craziness. There's the prank the girls play on one of Jackie's old boyfriends at the beginning, the training session the Mother puts her sons through ala Rocky style, the way Abbey stabs one of the son's penis with a hammer, the old TV on the head with an already made hole at the bottom. The fake knife in the back trick, and of course, asphyxiating the old lady with a really nice set of inflatable boobs. The list goes on.

Although one of my favorite parts about these films are the questions. Why do they have to wait so damn long to escape? Why do they take their time escaping? What is the layout of this house, it's practically as confusing as the Full House layout... Why was a head that was decapitated still hanging in the closet and still fresh after 10 years? It's all rather strange. Anyways the movie provides laughs, and may be a little offensive with all the raping going on but it's nothing compared to Last House on the Left of course. If you feel like having a good laugh at the expense of others this is the movie for you.

i loved the "punk sucks", "disco's stupid" debate the bothers had.

i guess the punk brother should have listened to more naked aggression and bikini kill. might have stopped all the raping.