Cannibal Holocaust: Not a Good One to Watch While Eating Rat Kabobs. 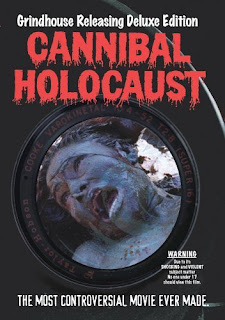 In the horror movie world there is one film that is mentioned time and time again as the most disturbing film out there. After seeing it I can whole heartedly agree. Cannibal Holocaust was the first generation Blair Witch Project, in that it tricked a lot of people into thinking it was actually a real documentary where people were actually killed. In fact, the director, Ruggero Deodato actually had to go on trial to prove that the killings were in fact not real. He actually had to bring in the actors and actresses, and prove it in front of a judge. If that doesn't get you interested I don't know what will.
I wouldn't recommend this film for the faint of heart. Even I, who have no problem with blood and guts had to look away at times. There is a rape scene in this movie that is the most horrible thing I have ever seen, and yes I'm counting Last House on the Left. People that were offended by that movie should never ever EVER see this.
The movie follows the travels and documentary footage of filmmakers who set out into South America to film a cannibalistic tribe. They of course do not return and a famous anthropoligist ventures out to find out what happened. Obviously they are dead, but he does recover the lost footage and we get to watch it with him. What he finds is a horrible display of human nature. What we find is that the americans are just as savage if not more savage then the cannibals they are filming.
The film is also banned in 6 countries, because of its gross depictions, AND the actual slaughtering of real animals on film. There is one scene with a turtle that is very upsetting and I had to fast forward. I usually draw the line at the killing of animals. So anyways most peoples main problem is that yes they did actually kill the animals which is awful.
This is another movie that I never want to see again but yet still return to it for unknown reasons... perhaps because it's banned, or maybe just because Deodato does something extremely groundbreaking and terrifying. The trailer doesn't come close to doing it justice so here is the famous picture of the scene that makes people think this woman's death was real.
The director actually made this woman show the judge how they accomplished this. The illusion is made by having the actress sit on a bicycle seat and then hold the top part of the stake in her mouth. Illusion or not it's still terrifying. 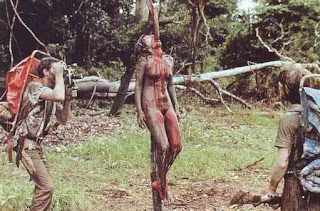 funny how peaple freak out about the animal stuff but tend to over look the real human deaths in this film i.e the black and white film of the executions......k.....

I think the main issue people have is that the animals were killed for the movie, while the footage was just used in the movie., but you are right in that a lot of people may over look this particular part, possibly because they don't realize it may be real or that everything else simply overshadows it. It's not an indicator of anyone's character--just the sheer brutality of the film in general.

but you are right in that a lot of people may over look this particular part, possibly because they don't realize it may be real or that everything else simply overshadows it

Maybe it's just the fact that blood and gore is so commonplace, but I didn't find this one SO bad. I mean yeah, my jaw dropped at the animals, but that's almost definitely due to the fact that I had read this post, and knew that they were real.

The basic story is that modern civilization meets savage, and the modern one is the actual monster. It's the same basic plot as fern gully, pochahontas, dances with wolves, avatar (sigh...) and they all did it better. Even Avatar.

I guess you could argue that CH came first, but... meh.

I would suggest watching The Gods Must be Crazy, and skip CH.

On the plus side, though, I DID find the scene with the impaled chick to be quite powerful. Not the chick, but when the cameraman says "Hey, watch it, we're filming!" and the dude has to force himself to stop grinning.

Well I think that people mainly watch this to get disturbed. I don't think anyone is going into it with a hope of it being a great commentary on anything. Sure they might come to that conclusion after the fact but the main driving force is always going to be the shock value.

For me it's the brutal realness of it all. It just feels real to me, and not just like the same old blood and gore. Something has always felt very wrong when I watch this, and that has always freaked me out.

@weazeal: Funny how people are suspiciously saying the same thing you did....ALL the freakin time! It's really annoying and I'm not going to apologize for....gasp!...caring about animals. On another note, I've never seen CH but I love horror movies and will watch just about anything. Except for maybe CH. :)