Black Christmas: Here's a Question. Was It Ever Possible To Call The House You are In's Phone? I Doubt It. 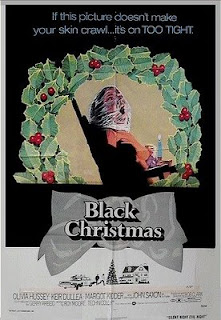 I first heard about this one because of the remake that was done in 2006. I've always heard great things about it, so I was extremely pleased to find the whole movie on p3nnyfearful's page on YouTube. And so I settled on the futon with my laptop and began the experience.

For the most part the movie does not disappoint. It takes place in a sorority house around Christmas time. The girls are fond of wine and presents and we are alerted to the fact that a mysterious man often calls the house. The callers voice is garbled and he spews vulgarities through the other line. The girls take it as a joke referring to him as the "moaner" but soon his calls start to make them upset. One by one the girls start disappearing. Boyfriends are accused, a young girl is found murdered in the park, parents are upset because their daughters aren't home for Christmas. Things are just nuts.

The killings in this movie are great. Not extravagently bloody but suspensful all the same. The best part about the film however, is that the killer is never found. We really only learn that his name is Billy, and that he obviously has had a troubled past. I haven't seen the remake but I've heard they delve too far into the mind of Billy and give him some disturbing history. Personally I think it adds more terror that he is never apprehended and that we know very little about him other than the fact that he is a murdering psycho.

I also enjoyed the sorority house setting. It reminded me of Scream 2 and the scary feeling of being in a big house all alone. I also love that it takes place around Christmas time because it's such a happy la la la time, it's unexpected and original. There is also quite a bit of comedy which I always appreciate in my horror films. It's definietly a classic and if you can stand certain vulgar words relating to a vagina then watch the clip below to get an idea of Billy and his psychosis. I would highly recommend the movie.
Buy Black Christmas at Horror Movie Empire

Black Christmas is great. Looking forward to watching it again as it approaches Christmas. Luckily this year I get to see it on the big screen. It's ok to be envious.

Recorded this movie on my DVR on Christmas Eve 2009, then watched it early this year. Fantastic example of what was truly great about the horror of that era. Atmosphere, not blood and guts, is the key to a suspenseful fright flick. Although less iconic than Carpenter's "Halloween", I actually found this to be a scarier film.