The Shining: Is It Weird That Delbert Grady Was My Favorite Character? 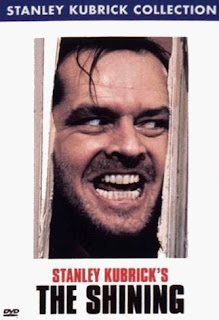 Stanley Kubrick is a man who knows how to make a person shake in their boots. This movie for many is the epitome of a scary movie and I know a few people who still refuse to watch it. While not really that gory, the film does something more terrifying here which is a psychological horror.

Jack Torrance has recently become the Overlook Hotel's new caretaker. Which means he and his family must live secluded in the hotel throughout the off season, which has the unfortunate problem of always getting monstrously snowed in. Danny the Torrance's son, has a special friend named Tony who lives in his mouth and whom he talks to through his finger. While being given a tour of the hotel, Mr. Hallorann the hotel chef, takes a liking to Danny and tells him that he has something that his grandmother used to refer to as the "Shining" some people have it, some people don't. What it really is, is a form of ESP that allows Danny and Mr. Hallorann to see some terrifying things. He lets Danny know that a lot of bad things have happened in this hotel, but that what he sees is just a picture, it's not real and it can't hurt him. Or can it?

Months and months go by and things are sort of OK. Despite Shelley Duvall being creepy and ugly and Jack Nicholson slowly losing his mind. Although I would go crazy too if I was married to Shelley Duvall. So poor little Danny gets exposed to some pretty messed up stuff. There is an ominous horror in room 237 and even though Mr. Hallorann tells him never to go in there, Danny's curiosity just can't be resisted. He shows up downstairs with horrible bruises and can only be described as "out of it". Jack Nicholson goes to investigate and we find a hot naked lady in a bathtub. This is what attacked poor Danny? The woman slinks over to Jack and starts macking it with him. Then Jack looks in the mirror. The sexy woman has become a disgusting and molding, rotten old granny who laughs and laughs. The site of her wrinkly and decaying body can only be described as the most disgusting thing you will ever see.

Now Jack starts seeing ghosts and having drinks with them, and Shelley Duvall walks in on a bizarre and disturbing scene between two men, one who is wearing a weird animal mask...
Things just start getting crazy. The twins in the hallway, frickin' Danny riding that big wheel around turning corners and not knowing what to expect. It is done well in so many many ways.

When I saw this for the first time I went to bed pretty scared. Our houses heating pipes would always make the sound of rushing water and whenever I closed my eyes I could only envision the blood pouring out of the elevator and flooding the lobby. It's little scenes like that, that make this movie truly memorable and scary.

I could go on and on about the meanings and symbols embedded in the movie but what it comes down to, is that this is truly a work of art. We start feeling the madness of it all just as Jack Nicholson does and in all fairness I too would love to just take an axe to a door every now and then. The ending is pretty powerful and makes you think about the entire movie all over again. The real horrors are inside of us, and they are alive forever...

The movie varies a lot from Stephen Kings novel of the same name, and book purists would want to watch the TV version starring Rebecca De Mornay, if they are in a tizzy about it. King's main beef with Kubricks version is that he makes Jack Nicholson the main character, when in the book the real villain or main character is the hotel itself. A valid point, although the hotel is what I think makes this movie scary. A lot of people think Jack Nicholson is responsible but I really understood that this hotel is one fucked up place.

Here is the big wheel scene with the twins and we get to hear a little bit from Tony, Tony Tone as well.

Delbert Grady is everyone's favorite. For years I've hung a postcard of the above shot of Jack Nicholson somewhere unexpected in my abode--the back of a closet door, the cellar stairwell, etc.

I found I liked this movie more than I did when it came out. I was originally disappointed, expecting more from Kubrick. Now I appreciate it more; and, yes, Delbert Grady is the scariest character in the film.