Is It Possible Chucky Was Better Looking as a Doll? 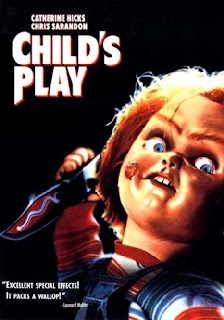 Now why a child would ever want a doll that looked like this is beyond me, but bless Andy's heart the kid is cute. Chucky is a hilarious movie and a pretty OK horror movie.

Charles Lee Ray knows voodoo and he's not afraid to use it. He gets cornered in a toy story and transfers his soul into a "good guys" doll, the latest rage in toys. Karen Barclay and her son Andy have it a little rough. She is a single widowed mom and has to works crappy hours at a department store. It's Andy's birthday and more than anything Andy wants a good guys doll which he is already a little too obsessed with despite not having the man piece of the allure. The doll however, is much too expensive for Karen to afford. Sad day sad day... But wait Karen is in luck! Her trashy friend Maggie tells her there is a homeless peddler in the alley selling a good guys doll! Hallelujah Karen's prayers are answered. The hobo is pretty gross and I sure as hell wouldn't buy a toy from his nasty shopping cart if you paid me but hey it's for Andy and he is pretty cute.

Andy finally gets the doll of his dreams and soon odd things start happening. Someone or something pushes Maggie out the window while she is babysitting. Has Andy turned into a psycho serial killer? Of course not, it's the escaped killer Charles Lee Ray trapped inside the body of a creepy doll!

So Andy gets continuously blamed and I feel so bad for him because he tries to tell everyone that it's Chucky his doll doing all the bad things but no one seems to listen. Even though he's really cute and it breaks my heart in the beginning when he tries to make his mom breakfast in bed....gah I'm tearing up just thinking about it.

Karen catches on though due to her unfortunate encounter with Chucky after she tried to burn him in the fire and the fight to bring Chucky to his death begins.

Now what I love most about this and I'm sure why everyone else likes it as well is how rude and vulgar Chucky is. He says the greatest things. It turns the movie into an instant classic. Making a doll have the soul and mind of a serial killer is ingenious, and although you may think Chucky may be limited in his movements and how he can kill people, think again. Chucky is one serious doll. He has of coursed spawned many sequels, one of my favorites being The Seed of Chucky, and the movies only continue to be a hilarious laugh fest.

While Chucky does have a hard time dying and it can be a but exhausting to have a half burned and mutilated doll trying to kill you AGAIN it still is a pretty decent flick, although I think the humor comes first. Here is the clip that Bravo played, and Karens first encounter with the real Chucky.
Buy Child's Play at Horror Movie Empire