The Emperor's Wing Man Makes an Appearance in Nosferatu.

There is an "Are You Afraid of the Dark" episode called Midnight Madness in which a Nosferatu-like character comes out of the film and reeks havoc on a movie theater. There is a certain image of the vampires spidery white long nailed fingers wrapping around the side of the door that is particularly frightening. It wasn't until I began hearing things about this movie that I made the connection and perhaps that is why I find Count Orlok so scary. But then again Bravo has it on their countdown so everyone must be a little creeped out by him.

The film is a loose adaption of Bram Stoker's Dracula. A loose adaption because the studio could not buy the rights to the novel, so they had to tweak a few things like the characters' names and some of the story line. However, the basic gist is still there.

A man named Hutter travels to Transylvania to make a deal with a mysterious Count regarding real estate. Once arrived, the locals plead with him not to go to the castle but his ignorance leads him there anyways. Count OrLok strolls though the courtyard like he is expecting an old friend. At dinner, Hutter cuts his finger and Count Orlok tries to suck his blood. Hutter starts becoming suspicious and thanks to his handy book "The Book of Vampires" he realizes Count Orlok is "The bird of death".

Count Orlok is perhaps the scariest horror villain I have ever seen. The way he rises from the coffin in the ship scene, and when he walks into Hutter's room at night is just constant panic in my head. The way he moves is so creepy that it makes my skin crawl.

The movie can drag especially if you aren't used to silent movies, but I find that the creepiness of Orlok makes up for it. Other creepy parts are the villagers carrying the coffins down the street in a long line almost like a parade, Orlok staring out the window at Hutter's wife sleeping, and of course just Count Orlok's fingers in general. So watch this, if only for the unbelievable amount of creepiness...

Also why does Count Orlok look like that creepy guy who is friends with the Emperor from Return of the Jedi? 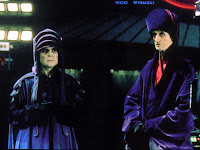 Well anyways, here is what I think, the creepiest scene of all...

Still my favorite vampire movie of all time. Will always be.
And I'm almost ashamed to admit that I actually had the action figure for that guy from Star Wars...

George Lucas steals from everything. Look at Darth Vader. He's a samurai. The shape of the helmet is a dead give away. However, many great things are achieved by tweaking existing material. I believe Pricess Leia is a name ripped right out of Flash Gordon for crying out loud.

But enough of sci-fi/fantasy. Nosferatu rocks. My favorite scene has to be when Count Orlok reaches out his hand. The shadow falls upon the breast of our heroine. He clutches his fist as if squeezing her heart and she reacts. Brilliant use of light, shadow, and the supernatural element.

Murnau was one of the first directors to recognize the transcendent abilities of the camera and understand that film was not theater and did not owe a debt to literature. For instance in Nosferatu Murnau's Count is a construction of the natural world with rodent teeth and dog ears - a vampire in the same way that spiders are, drinking the blood of what happens to fall into their web. A great difference from Stoker's work and far creepier, I think, than the monster that arose at Universal (whose hypnotic stare comes straight from Europe's The Vampires and reminds me of the Care Bears).

Two important films you can watch with Nosferatu are Herzog's Nosferatu with Klaus Kinski and Shadow of the Vampire (by the director of Begotten) which is a mockumentary of the filming of Nosferatu which posits that Max Schreck was really a vampire.

A friend of mine once asked what I thought was the best vampire movie; with little hesitation I answered "Nosferatu." Schreck's Orlock remains a truly terrifying character. This is one of the gems in my collection.

Another great European vampire movie is Vampyr from 1932. Lots of creepy scenes and great camera work.