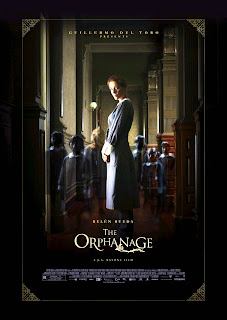 Wow. This may be the scariest recent movie I've seen in a long time. A Spanish supernatural thriller produced by Guillermo del Toro, The Orphanage may keep me awake tonight. I definitely had to watch through my hands at parts especially one part in particular but we'll get to that later.

The orphanage is about Laura who once was an orphan there herself 30 years ago but was adopted. Now 37, Laura and her husband Carlos live there with their adopted son Simon. They have plans to renovate the orphanage and turn it into a home for physically disabled children. Simon talks often about his invisible friends and one day while at a visit to the beach, Simon eerily talks to a new friend in a dark and creepy cave. He begins drawing pictures of his friends, one being Tomas who wears a strange sack over his head.

Laura gets a visit from an old woman Benigna who has a file on Simon and wants to talk about his illness. We soon discover Simon is HIV positive but he will be fine as long as he takes his medication. Soon Simon starts acting strange and introduces a new scavenger hunt type game to Laura that his new friends showed him.

On the day of the welcome party for the new children, Simon wants to show Laura Tomas' little house but she says they cannot see it now. Simon gets angry and she slaps him then tells him he doesn't have to come down if he doesn't want to. Later on Laura goes to find Simon but soon discovers him missing. As she turns around in the hallway a boy wearing the strange mask and with the name tag Tomas confronts her and pushes her into the bathroom, locking the door.

Simon has soon been missing for 6 months, and Laura starts seeing and hearing strange things. No one believes her of course so she must take matters into her own hands to get Simon back.

I don't want to reveal too much about this plot because it is truly an experience. The movie is so beautiful and moving and terrifying in so many different ways that I'm still in awe in about it. This film like Pan's Labyrinth isn't afraid to show certain things that other movies, even slasher films refrain from showing. There is one scene in particular where it is surprising what is shown, especially because they seem to cover it up right before.

The most terrifying scene in the entire movie however is towards the end. There is a scene in the beginning that mirrors this perfectly, where Laura as a child is playing a sort of red light green light game. She says one two three knock on the wall and then turns around. The children get closer and closer each time and whoever touches her means she is kind if "it". Laura recreates this game in desperation in a dark room. Every time she said one two three knock on the wall the camera would slowly pan to look behind her just as she was doing. It was probably the most intense 5 minutes of my life. I'm not joking.

While there isn't a ludicrous twist ending like so many recent films are so fond of, the end was still surprising. It was incredibly moving and I was 2 seconds away from crying. There is a real sense of closure with this film which I find to be a bit absent in other horror movies. Especially those movies where there is "one last scare" or where you see the killers hand or something letting you know he's not really dead.

Other great scenes are; Laura meeting Tomas for the first time (watch the clip at the end), the medium being put into a trance and walking through the house, hearing the screaming of the children in the same scene, Tomas in general, and finding the "clues" with Laura. It's all so wonderful.

This movie had me on my toes the entire time. There is no murdering, no boobs, no excessive blood but it still had me unbelievably terrified. I would recommend this movie to anyone looking for a good scare. It's incredibly intelligent, beautiful, and even profound in some ways. See it, you won't regret it.

Nice review! This sounds like a pretty scary movie, I'll have to check it out - thanks for sharing! :)

I'd have to agree with everything you have wriiten here. A bloody creepy and scary film, and very intelligently made. That scene of laura knocking one the wall and the ghosts appearing behind her creeped me out like NO other scene I have ever seen.