The Sixth Sense: I Always Knew That Mischa Had Problems. 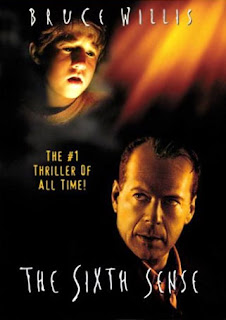 Ooh M. Night Shyamalan your first blockbuster may very well be your last. This movie is another where the first time I watched it I was scared out of my mind. I remember a particularly mean incident where I got up to go to the bathroom and all the cabinets were opened. My sister having ran into it before and done so. The nerve.

If you don't know the story it's as simple as saying that Cole sees ghosts, scary ones. Usually ones with bad wounds but also not limited to Mischa Barton throwing up oatmeal and mean ladies in pink bathrobes. Dr. Malcolm Crowe arrives one day to examine Cole and his inward personality. Together they uncover a way to help Cole and to help the ghosts.

One of the most genius parts about this movie, is that we don't entirely know what is going on until Cole's famous line in the hospital, "I see dead people". Before that the only real instance we had was the scary man in the tiny closet who ripped Cole's sweater and beat him up. BUT we never saw him. Not until Cole reveals his secrets do the ghosts reveal themselves which is an interesting and very telling detail.

I can't imagine having to see dead people all the time. Poor Cole...those ghosts can be real assholes sometimes. Only when Malcolm tells Cole that he should try to talking to them and see what they want, do we start to understand Cole's ability.
Mischa Barton of course being the trial run. This is one of my favorite parts but also interesting is that after this, the ghosts stop being scary all of a sudden. Very convenient.

Shyamalan also loves playing with color in this film, where red is the key. Things that are red are places where the living world crosses with the dead world. There is Cole's red fortress that he runs into when there is a ghost, the door knob to Malcom's office where he goes to do his work, Mischa's stepmother is the only guest at the funeral wearing red, and Cole's mothers nail polish is red when looking at the photos with the strange white spots.

The best and creepiest scenes are when Malcolm is listening to his old tapes where Vincent was left alone for a minute. That voice that comes out of that tape is pretty damn scary. The people hanging in the school always freaked me out, but that's probably because hanging people scare the Jesus out of me. Then when Cole is taking a whiz and the lady in the pink bathrobe walks by... ahhhh. Although sometimes I wonder if that scene would be as scary if there wasn't that jolt of music....my guess is probably not. But no matter the ghosts are still scary enough to get a reaction.

My other favorite scene is the one I have posted down below. This scene usually makes me cry and Toni Collette is so amazing in it. It's not particularly scary but I find that it really sort of defines the movie as a whole. Cole's ability while incredibly scary is really a connection to another world that many feel they have lost. So all in all, M. Shyamalan's best work, and one of the scarier and more interesting horror films. I won't spoil the twist even though I'm sure everyone knows it even if they've never seen it...but you never do know...