Suspiria: It's Raining Maggots and Blooood 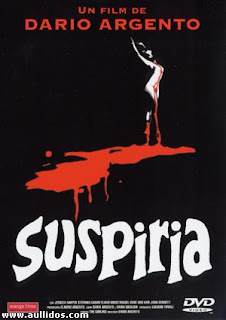 This has got to be my number one favorite horror movie... Number 24 on Bravo's Scariest TV Moments and  probably Dario Argento's most famous and talked about movie to date. The movie follows Suzy Banyon, an American girl studying ballet in a prestigious German dance school. Slowly but surely she uncovers that the school was founded by a famous witch named Helena Markos, and that the school may never have left her control.
What I love most about it is it's nightmarish quality. The first time I saw this movie I felt really strange after it. Like I never wanted to watch it again but couldn't stop myself from doing so. The colors are simply amazing. Obviously and wonderfully fake red blood is one of the greatest parts about it. Argento creates more than a horror movie here- it's a work of art. People usually think I'm weird for saying that I think blood is beautiful but whatever it's true. Blood is used in this movie especially in the beginning in such a way that I really wouldn't mind a poster of it.
Perhaps the most talked aspect is the opening death scene. I have to tell you, I have never rewound and re-watched something on youtube more than this opening scene. I have no words for it other than AMAZING. I'm a horror movie fan who appreciates much more than a gory slasher flick with boobs everywhere. I usually go for the unusual, the well made, the artistic horror movie and this is the dictionary definition of such a film.
It has it's violent moments; a knife slashing into a heart, maggots falling from the ceiling, a dog ripping a man's throat but all of these aren't vomit inducing, look away aspects. They only add to the films impact of not being able to look away from the nightmare.
The music is also a signature move of Argento's and really adds to the nightmare. For some reason I downloaded a few of songs and everytime they come up on my Itunes in shuffle mode I shudder and switch to the next song.
The final thing I love about it is the storyline of the three mothers. Suspiria is the first part of the trilogy of the three mothers, in which there are three mothers, or three "sorrows". Here is wikipedia's little spiel about it;
"The title Suspiria and the general concept of the "The Three Mothers" came from Suspiria de Profundis, Thomas De Quincey's sequel to his Confessions of an English Opium Eater. There is a section in Suspiria De Profundis entitled "Levana and Our Ladies of Sorrow". The piece asserts that just as there are three Fatesand three Graces, there are three Sorrows: "Mater Lachrymarum, Our Lady of Tears," "Mater Suspiriorum, Our Lady of Sighs," and "Mater Tenebrarum, Our Lady of Darkness"
I have seen Inferno and will talk about that as well eventually, but I have yet to see the newly released La Terza Madre and I could not be more excited to do so. Once I get a job and can get netflix my dreams will come true...
Here is part one of the film which if it doesn't show you exactly what I mean by nightmarish, you have no soul. Pay attention to the tension of the music, the colors, and the way the rain pours down like blood.
Posted by Andre Dumas at 1:17 PM

I love Suspiria!! It's my favorite Argento movie and one of my all time favorite movies as well.

I have nothing more to add since you did so perfectly. :-)

Thanks! Suspiria will always be my #1 inspiration to joining the community of horror.

I just finished reading your entire blog (yeah, every single post. It took me a few weeks though - don't ask me why I decided to do that but I'm glad I did. Thanks to you I have discovered a few gems that made me really really happy. So yeah, thank you so much, I love your blog (obviously).

"Suspiria will always be my #1 inspiration to joining the community of horror."

David Argento is a sick fuck who, according to himself, enjoys (or prefers) seeing pretty women murdered on screen. So congratulations on that :)

Suspiria was directed by the same man who made Deep Red two years earlier. Actor Jacopo Mariani was the young man from Deep Red who witnesses his mother stab his father to death. Director Dario Argento is talented but he revels in violence and gore.