Night of the Living Dead: Whoever Spells Barbara like Barbra Deserves to Be Eaten By Zombies. 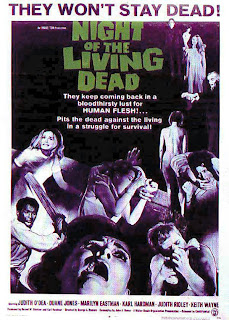 I just finished watching this for the first time (thanks to my newly aquired Netflix membership) and although I am not a zombie movie fan, I have to say that I was pleasantly entertained. People always talk about this movie as the messiah of the zombie film trend. Zombies are perhaps the most interesting of horror movie villains because of their pack like hunting and their strength in numbers. What is also interesting however is that Zombies are really just representations of ourselves.

The film opens with brother and sister Johnny and Barbra. They are off to the cemetery to put a cross on their father's grave. Barbra has an old fear of cemeteries and Johnny taunts her by saying "They're coming to get you Barbra!" Over Johnny's shoulder we see a strange figure hobbling. At first I didn't think there could be a zombie so soon. I'm used to horror movies taking a little long for the good stuff to happen so imagine my surprise when the zombie grabs Barbra immediatley. What a curve ball! Barbra escapes while Johnny isn't so lucky. She runs to an old farmhouse after being chased by the zombie and discovers a mutilated corpse upstairs. In her horror she runs outside where our hero, Ben pulls up in a pickup truck and pushes her back inside. They begin boarding up the house and soon discover a family and a young couple is holed up in the basement. The movie is not so unlike the end of The Birds in that the house is all boarded up with the predators on the outside, and there is nowhere to go. Once again hope seems a million miles away.

A TV keys our characters into what is happening. Apparently it is believed that some radiation from some exploded space thing is what is causing all these dead people to rise again, sounds a little like bullshit in my opinion. However they do offer a solution by specifically stating that a gunshot to the head will kill them for good. Ben plans an escape which doesn't go so well and pretty soon all the characters are goners. Ben seems to be the sole survivor until a group of gun toting men go around killing all the zombies and mistake Ben for one too.

Having all the characters die in the end is a powerful statement for a horror film, and it really makes things just feel hopeless. The zombie motif works wonders here as we realize that what we really have to fear is ourselves. Humans against humans equals death death death. Perhaps a social commentary on war in general? Or our habits of always coming into conflict with those closest to us? However you choose to interpret it, the zombie fad is quite interesting.

The film was great. It was very suspenseful because you too sort of feel like you are trapped inside the house, only you as the viewer are trapped into the movie. There are a few really great and memorable scenes. I enjoyed the beginning and our first glimpse at a zombie so soon into the film, as well as the scene where the little girl is eating her father's dead body and of course then the murdering of her mother with a garden spade.

Sometimes I wish people weren't so stupid in zombie movies. Ben keeps shooting the zombies in the chest. HELLO the news said you have to shoot them in the head, why is that so hard to understand? Then we have the Mom being all confused and upset about her daughter... umm..prettttty sure she was just eating your husband and therefore is a zombie and no longer your daughter. And of course there's Barbra seeing Johnny and jumping into his arms then being swept away by the sea of zombies. Sigh. People will never learn. Poor Babs, she never really had a hope to begin with.

So all in all it was a great experience. The zombies eating the humans was stomach churning and the eerie way that the zombies mass together and slowly walk is really amazing. Here is the scene where the little girl eats the Dad and so on...I also believe that you can watch the entire movie on Youtube for free, so log in and enjoy!
Buy Night of the Living Dead on Horror Movie Empire!