How Are You Even Suppose to Pronounce Se7en? 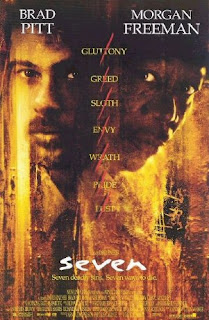 Se7en, like Poltergeist, stands on it's own as a great movie, not just a great thriller movie. Morgan Freeman is probably my favorite person in the world and Brad Pitt while hot is a complete douche bag in this movie but only adds to the films overall greatness I suppose. The movie takes place in one of those un-named cities. It is always raining and always extremely gloomy to add to the nightmare-like quality and also apoctolyptic quality too.

Morgan Freeman and Brad Pitt are two dectectives working a case where all the murders are connected to one of the 7 deadly sins. The killer is hidden for much of the film, and is downright frightening and the gruesome murders are wonderfully imagined and almost breath taking to watch. We never get to watch him committing the murders but it is the outcome of them that makes them terrifying.

Kevin Spacey is the evil murderer who claims he is merely doing God's work. That scene when he's in the back of the cop car explaining his reasoning is the creepiest thing ever. He does amazing work in this film and it cannot go unnoticed. Also when they find his apartment and are reading his journals ahhhhh psycho psycho.

The final scene for many is the cherry on top of a perfect suspenseful movie. It's all so horrible you can't believe it. The audience is just as horrified as Morgan Freeman is when he opens the box and looks inside. That is some powerful stuff.

Bravo cites the "Sloth" murder as the scariest moment and while I agree, I do think that all of the murders are scary in their own way. The incredibly and digustingly fat man in the beginning, the woman who's face is mutilated and of course the unforgettable penis knife contraption. Gaaah. Crazy. Just crazy man.

So here is the scene of the Sloth murder. How they made this guy look like that we will never know. But it is one piece of horrifying cinema that will stay with me for a long time. If you haven't seen this movie rent it immediately. It is not only a great thriller but a great movie as well.

Another one of my favorites. In fact, it's in my Top Five of All Time.

I love how he almost looks like he's about to cry as he tells Somerset and Mills:

"We see a deadly sin on every street corner, in every home, and we tolerate it. We tolerate it because it's common, it's trivial. We tolerate it morning, noon, and night. Well, not anymore. I'm setting the example. What I've done is going to be puzzled over and studied and followed... forever."