The Sentinel: A Birthday Party for Your Cat? Yes Please. 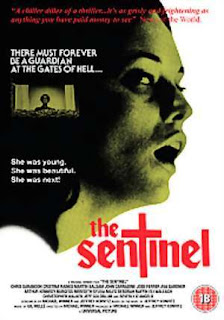 I saw this a few months ago. I was wandering Hulu's movie list, and was surprised to find they had this. Don't get it confused with the Michael Douglas movie...The Sentinel is a spectacular and extremely eerie film.
The first I heard of it was on Bravo's Scariest Movie Moments. It made number 46, and it's clip intrigued me. The movie tells the story of Allison Parker a model who has just moved into a new apartment in Brooklyn. The top floor is occupied by a blind priest whose only activity is to sit and look out the window. As time goes on, Allison meets other residents including, 2 strange women, one who thinks it's funny to masterbate in front of Allison, (played by Beverly D'Angelo of course), then there's a crazy old man who throws birthday parties for his cats, and an old woman who has clearly lost her marbles. Things only get stranger when Allison finds out the only residents of the apartment are herself and the blind priest....so what can this mean?! Why the other residents are demons of course! I guess I shouldn't unveil anymore of the plot, but I can't resist.... one more interesting tidbit is that the apartment building is owned by the church and is a gateway to hell.  The blind priest ensures that the demons do not escape, but it time for a new guardian to be appointed and guess who's number one in line?
It's a great movie filled with some unexpected and uncomfortable nudity, an interesting an engaging plot, and I can't help but love the crazy cat man. Whoever puts birthday hats on cats is a winner in my book.
In terms of scariness, I did not have to watch with a pillow, the sound off, or through my hands. This is definietly a film not to be missed. Oh and the film also has Jeff Goldblum and Christopher Walken in it...crazy I know.