Cape Fear: No One Ruins Atticus Finch's Bowling Game and Gets Away With It! 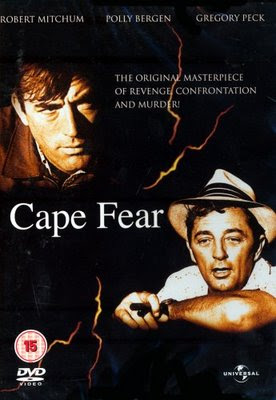 "Hey Buster! You got some um salted peanuts (garbled words about it having to be in the shell)
"Not in the shell"
"...Ok forget it."
Max Cady: A man who knows what he wants.
When I watched the 1991 remake of Cape Fear I remember being so revolted by the Robert De Niro/Juliette Lewis scene that I thought I could never look at the Bob the same ever again. Well I'm here to let you know that I thought right. But we're not here to discuss The Bob we are here to talk about Atticus Finch and the completely different but equally unsettling character of Max Cady that Robert Mitchum portrays.
Cape Fear builds up some truly great tension- that has the stunning ability to make you yell at the screen every time Max Cady slithers into a scene. Sure Bob De Niro was scary as fuck- but Robert Mitchum has something...understated and truly creepy going on. I think it's because he seems more normal and unexpected than Bob. When you see Bob De Niro- you are pretty much turned off immediately (how he ever got Illena Douglas's character into bed we'll never know) he pretty much puts up an enormous red flag the moment he enters any scene or situation. Robert Mitchum on the other hand--well he's just a guy! No insane Jesus tattoos- just a nice white hat kind of guy. Sure the minute he opens his mouth he turns slimy and blagh- but from an outside point of view- no real threat there. Which then- ends up making the movie incredibly horrifying.
In case you don't know- Cape Fear follows the Bowden family as they are relentlessly stalked and harassed by Max Cady- a former prisoner who blames Mr. Bowden for his initial conviction. Cady is a sicko. Let's just say that. I mean get over it man...no need to poison the family's dog because you're a little sore (mwaha) from having to spend 8 years in prison for something you obviously did because lets face it- you are an actual psychopath.
The scenes that filled me with the most anxiety- had to have been when Nancy was sitting in the car and waiting for her mother to return from grocery shopping, and Max Cady gets closer.....and closer.........good god. Then there's the bowling alley scene- which is especially heart breaking because Atticus was having such a good game- and then he turns around and sees Max Cady 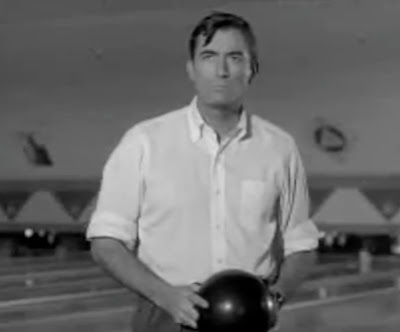 .... and misses the chance to sweep up that spare. The nerve. The scene with the woman just sitting on the bed watching Max draw nearer- and she just knows something ain't right! AND how she just walks away after that whole debacle and cannot help out the Bowden family by reporting the crime that Max Cady committed against her. Biotch.
Then of course how can you deny that that last scene isn't a complete nail biter? Poor Nancy... although I was pretty relieved to know that there would be no creepy "let me put my finger in your mouth and yeah- yeah that's OK you can put your finger in my mouth" scene. THANK GOD.
In closing- Cape Fear may not be as intense and utterly terrifying as the 1991 version- but it has the kind of honest, no frills horror that I just completely adore. What is more terrifying than an ex-convict stalking your family and turning up everywhere that you go?
Posted by Andre Dumas at 10:42 PM

I much prefer Mitchum's portrayal to DeNiro's for the reasons you mention--he's so understated and clearly in control of himself and everything he does; sure, he's KRAZEE, but the kind of crazy that knows exactly what terrible things it wants to do and exactly the best ways to accomplish them. Plus let's face it--Mitchum is a freaking intimidating individual in his best moods, and his cold, calculated menace here...*shudder*

I'm willing to bet a fight between Mitchum's Cady and DeNiro's would end with Mitchum calmly smoking a cigarette while admiring a tattooed sheet of leather newly decorating his bungalow wall...

I like the original Cape Fear alot. I'm just in general a big fan of Mitchum. But for incredible Mitchum stuff, I really love Night of the Hunter. Both creepy and surrealistic. I don't know if it really qualifies as horror, but its f-ing great!