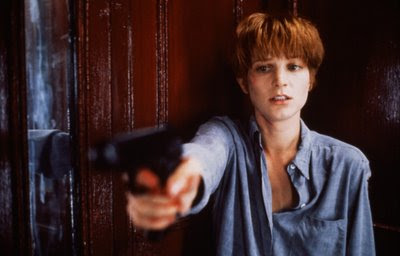 Alison loses on so many different accounts that it's hard to keep track-the least of which has to do with her brilliant shade of fire crotch/butch hair. We'll start with the obvious. She promised. She promised Hedy that there would be no chance of her getting back together with her dead beat fiance who cheated on her with his ex-wife. You promised Alison!!!!! So how do you think Hedy feels- an emotionally unstable young woman with a traumatic past, who finally finds a replacement for her dead twin sister- only to find that she has to move out after only a few months???? You know, I was watching "Friends" the other night- and the same sort of thing kind of happened where Monica and Chandler decided that they needed to live together in a 3 bedroom apartment so Rachel had to move out. How rude! Get your own fucking place morons- and you too Alison. What is Hedy suppose to do now? Huh huh huh!? Oh I don't know THROW A PUPPY OUT A WINDOW IN ANGER? Yes that's exactly what she does, and it's all Alison's fault.
Honestly, it's not that hard to grow some skin and not take back your scummy, sleazy, fiance who cheats on you and isn't even that dashing or handsome. Grow some balls sister. Sure Hedy started to get a little creepy- but if you had only kept your promise you wouldn't be hanging from the rafters waiting to stick Hedy in the back with a screwdriver- and a puppy wouldn't have died- and your fiance wouldn't also be dead with a stiletto stuck in his brain (although there are no complaints there)
And if you really want to get serious- why on earth would you fall for Hedy as a perfect roommate in the first place? She's a creeper. You took advantage of her yes- but all in all Hedy was weird from the first time you met her- and although she was pretty good at hiding her sociopathic tendencies- I really expected more from your rigorous roommate screening process. For instance- an in depth background check which includes criminal history/ are you insane or have you ever thrown a puppy out a window would have been nice. Gosh Alison- thanks to you, you now have no fiance, no creepy roommate AND no puppy. Sucks to be you.
Posted by Andre Dumas at 8:49 PM

I haven't seen this movie, but I've been told about it. I really want to see it, because it reminds me of an ex-housemate of mine. I had some pretty distinctive hair at one point (bright fire engine red, almost shaved at the back, fancy fringe at the front) and one day I came home to my housemate who had dyed her hair the same colour. I didn't say anything....
The next day I came home and she had the exact same cut as me too! She apologised and said "It wasn't meant to look like this" - she was LYING. Then she started hanging out with all my friends behind my back. It was scary as fuck, and I moved out and she went psycho.

Wow Tasha....that IS the movie! Are you sure your life wasn't used as inspiration to write the book/movie? That is some wild stuff!

Jennifer Jason Leigh's best role since Fast Times...she's so creepy for being so short