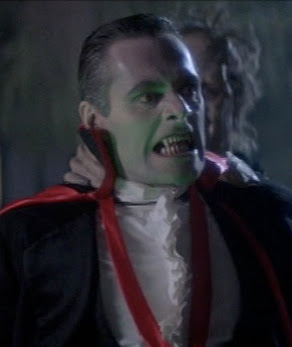 Surprised are you? Have I really picked one of the most notorious vampires as my target of this way to go moment? Believe it folks- Dracula did some pretty stupid things in the Monster Squad none of which have anything to do with his terrible bat morphing skills

But I won't get into that because who knows if that was really his fault or Sean's Dad's-- regardless- fly a little faster next time so that doesn't happen again thanks.
I will begin with the fact that Dracula chooses some of the worst monsters to join his squad. You have any classic movie monster at your command and you pick a Mummy??? What purpose of evil does he serve? He walks slow, he's comprised of dust and bandages- and as our friends in the Monster Squad show us- all you have to do is unwrap him and he's done for. Plus when the other monsters were out getting shit done, what is the Mummy doing?

Yup. Hiding out in a kid's closet. Nice teammate choice Count.
Now you have the others- Wolfman- he's probably the best man for the job, The female vampires? Tantilizing scary and there are three of them- another good choice. But Frankenstein's monster? What part of the movie Frankenstein did you not understand Dracula? Frankenstein actually has a heart- and if he actually has a heart he's not going to help you get anything. He's going to become friends with some kids and have some fun- unlike you and your loser monsters. And also this choice leads to your demise so yeah. Poor form.

The only redeeming factor in things that involve Frankenstein is that Dracula was smart enough to pack his own spark plugs in his scepter- always prepared.
The 3rd thing wrong with Monster Squad Dracula, is that he has the worst strategy in the world. Some wimpy kid has the sacred diary that you need in order to bring evil to the world and what do you do? 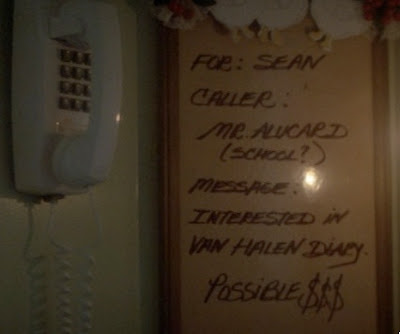 Call him? Really? You're frickin Dracula- you are the servant of the devil- I think you can come up with something a little better than calling your victim and leaving a message. Hah I never noticed that his Mom thought he said "Van Halen" instead of Van Helsing... classic. Anyways- Way to go Dracula- you know who's more macho than you? Horace. That's right Fat Kid. 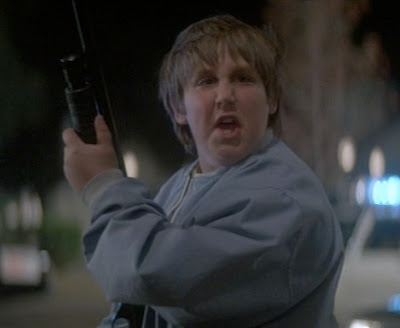 Be ashamed.
Posted by Andre Dumas at 8:00 PM

Oh yes I vaguely remember that : (
Did you ever notice that Uncle Rico from Napoleon Dynamite is the Wolfman? I think he is at least.

You'd think Dracula would be this great strategist. Maybe something rolled out during a night in his little coffin.

Funny post, Monster Squad is one of my favorite monster movies, cause it brings all those classic movie monsters together, but that doesnt change the fact that when I rewatched it just the other day, it felt like the cheesiest movie ever!

Somethings just dont make sense at all! Like what you mentioned about Dracula having his own sparkplugs, why would that happen? ANd why is their car a ghost car? What happens to all the monster inside the car? They turn into ghosts too?
Nobody notices that all these vampires are running around their neighborhoods?

How about Frankenstein? Nobody notices he is walking about their backyards?

The monster from the black lagoon suddenly pops out of the sewer system just like that?

Fantastic write up. Had me rolling.

And yes, Uncle Rico is the (guy who turns in to) Wolfman. I'd have thought Dracula would pick a werewolf that didn't peak in '82.

Very funny stuff Andre... Dracula is a bit lame in this flick, and to tell you the truth, the whole movie has lost a lot for me since I first saw it as a kid.
But for the record, mummies are badass...

yes, I knew that... he also played the werewolf in Fright Night 2 if I remember correctly.

Whaaaat you guys? Monster Squad is still a classic in my eyes! I had to do everything in my power not to watch the entire thing while I was taking those screen shots!!

Film Connoisseur- Hahaha I always wondered about that ghost car... for instance where did he get it?! Last I checked Dracula didn't have the power to create ghostly apparitions that are drivable- and have a skull hood ornament.

Why is uncle Rico always playing werewolves? What's up with that? And he drove the van full of illegal mexicans in Men in Black jeez- the man has problems.

Monster Squad is one of my favorite childhood movies and I have seen it more than most people have seen their own feet...whatever that means. I can quote at least 80% of the film and my favorite scene is when "Rudy sends a message" (anyone get it?) to Kevin Arnold's bitch ass brother!

Mummy's can be badass depending on the movie, MS is not an example of a badass Mummy though. However, maybe his band aid breath is his secret weapon - one that he was not given a chance to unleash?

Dracula is a bit of a bonehead, but when he calls Phoebe the Phoeb a bitch, you know he is pretty tough...when it comes to facing a 6-year-old little girl.

Haha oh totally Dracula definitely has his moments. Breaking every cops bones that tries to stop him and of course the calling Phoebe a bitch thing. Plus the beginning scene where he just punches out one of the pilots. Pretty good stuff.

Him calling the little girl a bitch always freaked me out--pretty intense for a monster movie that's kind of aimed at kids. Right up there with Elliot calling his brother "penis breath." Ah...the '80s.

Haha and actually now that I think about it- Dracula could have at LEAST given a better fake name than Dracula spelled backwards....come on let's be a little trickier than that please.

Dracula has been the symbol of horror. I still want to see more Dracula movies this year.
Brian@Rhinehoth a New Horror Novel by Brian E. Niskala

Haha Bobby that was very graphic and now I'm upset.

But yes she is an idiot. She also plays a bitchy whore in Teen Witch I love her.

haha... sorry. lack of sleep has put me in a very odd form this morning.

Wow, Andre, that's the last time I recommend this blog to my parish priest! Thanks Bobby.......

I have come to the conclusion that I'm going to name my kid Fat Kid and nothing else.

How come Dracula didnt leave a number for Sean to call him? How was he supposed to get in touch with him?! I want Draculas #!