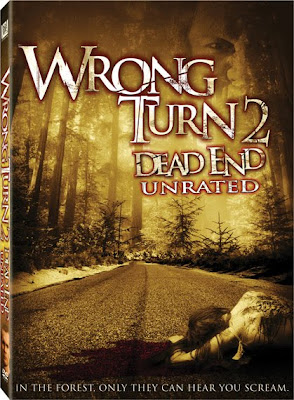 If there was ever a movie to make you feel like never eating again- Wrong Turn 2 might just be your guy. I wasn't a huge fan of the first- nor am I huge fan of the 2nd- heck I'm not really a huge fan of the entire genre but- there is no denying the sheer insanity of how much gore and gross outs and entertainment lie within each of these movies.
Wrong Turn 2 takes place presumably in a different area of West Virginia- and this time follows a bunch of idiots trying to make a Survivor rip off reality show. No need to go much further into the plot- the hill billies come- they kill, they eat and in the end someone goes home a winner.
I've heard a few people profess their love for Wrong Turn 2 as their favorite of the movies and I can certainly see why. While the first may have taken itself more seriously, there is a definite air of comedy flowing subtly throughout- what with Henry Rollins running about like a hopeful future G.I. Joe cast member. Wrong Turn 2 also has more. More hillbillies, more gore, more kills- and more detailed glimpses into the mutants lives. We see hillbilly births, hillbilly sex, hillbilly dinners complete with hill billy prayers- it really is somehow comforting to know that deep down inside, they really could just be normal people- well yeah I may be stretching that one a bit.
The one problem I have with the movie is that it seems to have character attachment ADD. Who are we suppose to like in this? We keep latching onto who we think will be the survivor when all is said and done- but that person gets killed soon after. I was half expecting to just start rooting for the hillbillies but then of course I imagined how long they'd been wearing those overalls and thought otherwise. Basically this isn't really the type of movie to look for major downfalls in. It's an entertaining, gore-fest of grossness and an in depth look into the every day life of a hill billy. You can't really knock it for accomplishing what it set out to do- and hey I liked it better than Hatchet so there's that.
But wait I do have one huge question- what is up with the daughter hillbilly being Asian? No one else seems to find that weird except me but there you have it.
Favorite kills? Mine are Kimberly's impossible body splitting from the beginning, and the dynamite explosion of the old geezer. Good stuff. Also, I have to admit that Henry Rollins was pretty bad ass and I sort of liked it.
Buy Wrong Turn 2 at Horror Movie Empire!
Posted by Andre Dumas at 5:06 PM

Kinda liked this edition of WT. So many good kills and such stereotypical victim fodder.

Somehow Henry Rollins legitimizes a horror movie just by being in it..ahem Feast.

Just caught this last night on cable for the first time. You're so right about the ADD thing! I have no idea why they killed off that sympathetic girlfriend character so early, other than just to shock for the sake of shocking...

Yup you are definitely one of the ones I had in mind for people who enjoyed this better than the first Jaded! I agree great kills and just good entertainment really!

B-Sol It really blew my mind. Maybe the actress decided halfway through filming that she wanted to get paid more? Who knows. It just seemed crazy- like it should have been the girl that actually survived instead of her you know? Something ain't right there.