The Wolf Man: The Evolution of the Werewolf and Stephanie Tanner's Nightmares. 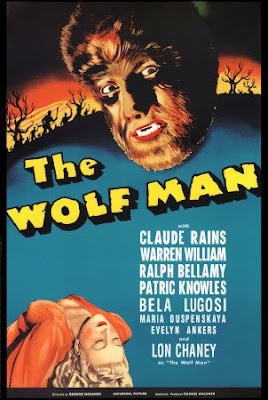 Following my Phantom of the Opera post and the insanity of Lon Chaney's desire to transform his face into a nightmare--it only made sense that I would then venture into the land of Lon Chaney Jr. and the creation of The Wolf Man. Although Werewolf of London came before, Henry Hull was against being put through the seemingly painful and long process of the make up application- so who better to force pain onto than Lon Chaney's son?

Unfortunately the Wolf Man's makeup is not as startling as his father's- mostly likely due to the fact that Lon Chaney Jr. was NOT sticking metal wires up his nose and gluing his ears back. Regardless- The Wolf Man is a cornerstone in movie monsters and makes cameos in two of my very favorite things- Full House and The Sandlot.

In Full House- smelly footed vixen Kimmy Gibbler brings over The Wolf Man for a bit of slumber party goodness. Stephanie Tanner- always one to follow the lead of her older sister Donna Joe Tanner or D.J. as you may know her- pleads that she should be allowed to watch the film as well. Uncle Jesse- being the hip and cool uncle that he is- allows Stephanie to watch resulting in panic- and a sleepless night. One thing that always struck me as odd with this episode (The episode is "Baby Love" by the way) is not only how terrified the three girls are-- but how jumpy and startled Uncle Jesse and Becky are. The scene in question-- when Gwen is traipsing through the forest and The Wolf Man comes close to getting her- is hardly hit the ceiling, spill your bowl of popcorn all over the place- scary. But alas I digress. ANYWAYS- before I became a horror aficionado- this episode always stuck out to me and for all the right reasons. But mostly because it's hilarious when Stephanie hears a car horn- and asks D.J. if the Wolf Man was real would he be driving an Isuzu? Ha. Hahahaha. All I can picture is Lon Chaney Jr. driving an Isuzu and honking his horn to scare people.....oooh I am lame. Ok moving on-

The Sandlot on the other hand has possibly the coolest nod to The Wolf Man- ever--when the Beast is chasing Benny and jumps through the screen at a movie theater playing the movie. It shows the ever popular Gypsy woman Maleva giving Larry the 411 on werewolves. This scene is my favorite and I love how she talks and I just love that awesome voice of hers- plus I love the Sandlot so obviously this is the best thing ever.
Despite my awesome tangents- I hope you realize how simply classic and understated The Wolf Man is. We have Hollywood's first (well second really) glimpse into a werewolf and what is the thing we find most absent from the film? The full moon. It is so fascinating to me how things evolve throughout film. The presence of the full moon is seen rather outwardly in the next film- Frankenstein Meets the Wolf Man- but it's literally devoid from the entire length of The Wolf Man. Also interesting is Wolf Man's more manly appearance- walking on two legs, and still being able to fit in his clothes-- and the insistence upon the pentagram marking the next victim of the werewolf--an attribute of the werewolf that I believe was created by the movie.
Of course werewolf lore has existed pretty much forever and while all movies may choose to include some things and leave others out--there is always evidence of certain parts existing in classic literature that clues us in to how these legends and folklore began.
The Wolf Man is sensational and I can honestly say that I am very eager to see the remake. Despite it being a classic, the original is insanely short and doesn't develop on some of the things I find most interesting. The conflict between Larry and his father and the insistence upon the idea of the Werewolf being associated with mental illness- which TOTALLY makes sense if there hadn't been evidence of actual foot prints belonging to a wolf. Then there's also the issue with the wolf man makeup- which comes off mostly looking like some kind of odd teddy bear. 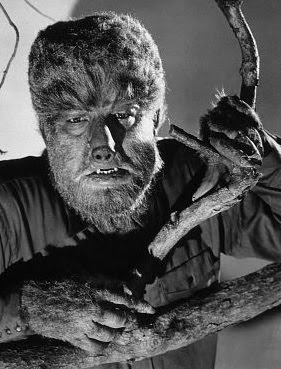 Hopefully the reincarnation of the Wolf Man will wake up the public to the good old fashioned idea of the werewolf and the fact that they do not usually live in clans- with their shirtless brethren and don tribal tattoos. Sigh. We can only hope.
One other thing that cracks me up-- is the exaggeration of Lon Chaney Jr's account of what he went through during the filming. Such as staying still for like 20 hours while the cast and crew got to take a lunch break and he had to suffer through the pain. Ooooh LCJ! Research this topic if you are more interested.
Oh and how creepy is the part where Larry watches Gwen through that telescope contraption then goes into the antique shop and talks about earrings he saw her putting on- when he was looking at her through the telescope?! So weird. Lon Chaney Jr. was a little creepy- but I guess it worked because Gwen falls in love not too long after!
Buy The Wolf Man at Horror Movie Empire

THE WOLF MAN is the movie that made me love horror movies (I first saw it at the tender age of 6 or 7), and I did a long post on the subject around Halloween over at Mad Mad Mad Mad Movies. You may be interested to know that in Curt Siodmak's original script (or at least his original conception of the story) the werewolf was never going to be shown fully wolfed out, except in a scene where Larry Talbot looks at his reflection in a pool and sees the monster there--the implication being that his lycanthropy COULD in fact be all in his mind. Once you know that, a lot of the psychological stuff in the movie takes on added resonance.

As far as "drop your popcorn" scary, to us jaded horror viewers it might seem kind of quaint, but I have an adult cousin who told me quite seriously recently that she cannot watch THE WOLF MAN, the old one, b/c it's just "too scary" for her. There are people who are not like us, it seems. ;)

You're right about Larry's stalkerish creepiness; how about that scene after the carnival where he's leaning in on Gwen by the tree trunk, totally invading her personal space? Chaney was a big, hulking guy, and he's intimidating--except that he is also such a teddy bear, I always feel that he doesn't realize he's being creepy; he's just friendly and likes her and doesn't understand how intimidating his is physically. Also, if you take the werewolf transformation as the bestial Id coming to the surface, you can read a whole lot of subtext in there that also works. (Again, the scene where Larry gets all confrontational with the gossipy old ladies in the antique shop--seems like the beast is just below the surface at all times.)

In fact, that's what's so tragic about Larry--he's a good man, he wants to be kind and be accepted by his father and be loved by Gwen, but he's got this beast inside that he can't control, and it tears him apart.

Thanks Vicar- I totally respect your love for the Wolf Man and it's greatness! It's the source of many peoples forrays into horror!

As for being scared- it's possible but I wouldn't say I'm totally Jaded. I did jump out of my seat in Phantom of the Opera!! Perhaps Lon Chaney Sr. just has the better stuff--better improptu make up skills at least.

Good stuff about that one scene being cut out. I'm glad it was cut out though because as interesting as that possiblity is I feel like it would have discredited the idea of the werewolf in someways- kind of like discrediting Dorothy's journey into OZ by having it suppoesdly be just a dream and the likes.

You know, I don't think I've ever seen this film in its entirety -- I know, how can I call myself a horror lover?! I'll have to watch it. I certainly like its descendants: The Howling, Dog Soldiers, and even Silver Bullet. The new reincarnation looks awesome -- scary, no vegetarian werewolves there!

Of all the Universal monsters, the Wolf Man was the one that scared me the most as a kid--I think because he was the most primal and animalistic. There was no reasoning with him, he was just gonna rip you to shreds.

I remember that episode of Full House...not quite as good as you did, but I remember it enough. Gibbler was such a scab.

I am a huge fan of the Universal Monsters and while I always have a hard time deciding which I like better between The Wolf Man, Dracula, and Frankenstein, I have a huge affection for Werewolf films in general.

The Sandlot is great too, by the way - props to you!

Hahah you don't remember that episode as well as I do??! Are you saying I'm a Full House obsessed nut bag? Because I am ! Heheh I have the DVD's (The early seasons before Michelle started talking and being annoying) and have watched them several times- not to mention every time I'm home and it's on TV. I just can't get enough!