The Fog: Jamie Lee Curtis is a Ho Fo Sho! 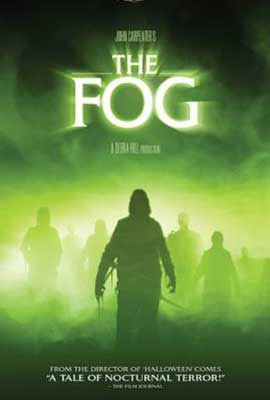 I hope someone else out there thought that The Fog was about zombies because now I just feel silly! Maybe I was reading the wrong description- although I guess these ghosts could technically be considered zombies....and that one guy got up off the autopsy table so aha ghost zombies it is! The Fog above all else is a study in atmosphere. And a perfectly creepy and desolate sort of atmosphere at that. I think that may be my favorite thing about John Carpenter as I watch more and more of his films- the chilling and haunting autumn atmosphere is perfectly achieved in Halloween and the desolate, isolated freeeezing atmosphere is achieved in The Thing. The beginning of the Fog is no exception- as you can almost taste the sense of grueling anticipation that something very evil and foul is afoot. A calm before a storm if you will.
The Fog tells the story of Antonio Bay a small- very small fishing town in California that is about to celebrate their 100th year. Once the clock strikes midnight- strange occurrences begin happening and a heavy, eerie glowing fog eases in. The fog seems to center around an old legend or ghost story about the Elizabeth Dane, an old clipper ship that perished due to a thick fog and ill placed campfire. 1oo years after the fact, and it seems the crew members of the ghost ship have returned to seek revenge against those who led them to their death!
First off I must say that I am completely in love with how the film opens. What better way to open a ghost story then with a crazy old man telling a ghost story around a campfire?!

It's all just so wonderfully eerie. The sea gently rocking behind them, the campfire that is lit while the old man talks about how the ship met it's demise thanks to a campfire and the way that he tells it? Perfect. It's so drawn out and every single word echoes through your ears like this clear haunting melody. Dramatic maybe but I can't deny it's power- I love ghost stories! Although I will say- I don't know what "club" this old man is running but apparently it involves keeping youngins up at night til midnight

while he tells them terrifying ghost stories about the very town they are living in....parents seem to be very lax in this little sea side town...
I would also like to say that I HATE sea side towns. How much creepier can you get? There's always this eerieness- because there's some lighthouse, or buoy clanging bell adding that extra bit of yuck. Plus the town consists of about 10 people- and the morticians there insist you stay in the room while they dissect the body. Seaside towns are wack yo. But the perfect setting for a ghost story nonetheless.
What else do I love....? You won't believe it- but I actually did not mind Jamie Lee Curtis- and she got to act alongside her scream queen mother Janet Leigh! Of course Jamie Lee is a whore in this- but every seaside town needs one. I've really never seen anyone take their clothes off quicker-

especially with someone who just picked them up hitchhiking.....yikes! I guess this was before the time of The Hitcher or else he would have known better.
Now one of the creepiest things about The Fog- for me at least is the appearance of the ghosts in the fog. They look so unbelievably eerie standing there illuminated by that green tinged fog and just standing there.

They could easily have passed for aliens- and with those fishing hooks? Egads! One of my favorite shots hands down was that first appearance of the ghost ship-

and then of course the sudden disappearance. It just made me feel so uneasy- and then cold....and I swear I could smell salt water mixed with rotting flesh....hmmmm that's kind of weird. But anyways I thought it was well done- and just the right amount of subtle creepiness that I was looking for.
Sure the kills weren't great- and the actual moments of fear weren't superb- but you can't deny that this movie has a special power about it. It's almost as if the fog creates that same claustrophobic nature that we find in The Thing. There is a sense of never being able to escape that thick fog no matter how fast you drive. And the fact that those zombie ghosts just roll in with the fog and can show up knocking on your door is reason enough to feel like you are trapped. We can all learn a lesson from The Fog- don't live in creepy little seaside towns and definitely do NOT open the door when a dense fog rolls in---and don't pick up pieces of drift wood off the beach either- it just causes a mess! Thank you once again John Carpenter for giving me a pleasant night of sublime movie watching!
Buy the Fog at Horror Movie Empire!
Posted by Andre Dumas at 9:18 PM

This was shown on network TV when I was growing up and I remember being so creeped out by several images and sounds in it. The distorted voice when the magic piece of wood gets all crazy still give me chills even thinking about it. Great story, great execution. The remake can sit and spin.

Things in (or on) the water, Andre. It always comes back to the water.

Yeah, when I was younger, this film definitely had a pretty high "creeped out" level for me. And, having watched it again not too long ago, it still holds up pretty well in the "entertaining" scale.

Zombie ghosts sound like something right out of Scooby Doo.

Carpenter is great most of the time. You mentioned how he captured the crisp, cool air of autumn in Halloween. Did you know he had people off screen throwing dead leaves to make it appear like autumn? masterful direction.

Haha sorry Igor she is still too mannish looking for me!

OMG, I can't tell you how hard I laughed at the title of the article. I'll never look at the movie the same again. :)

I just watched this the other night (for the millionth time)! You are so right about the atmosphere, there's nothing like it and J.C.'s score is just amazing.

please to enjoy... "An Open Letter To Mrs. Kobritz"

I think this is a good film and very underrated for how well it works. The atmosphere and tension is absolutely fantastic in this film. One of Carpenter's better films for sure.

And if you haven't seen it yet, skip the remake. It's pointless and terrible.

You can't blame JLC for dropping trou. It's Tom freakin' Atkins! The man just has to bristle his stache hairs and the ladies get girl boners.